Yesterday marked six months since WikiLeaks’ publisher Julian Assange was expelled from Ecuador’s London embassy and arrested by the British police. The sight of a persecuted journalist being manhandled by five burly police in the capital of a supposedly democratic country shocked millions of people around the world.

The violent arrest was itself the culmination of an unprecedented political conspiracy against Assange, involving the US, British, Swedish and Australian governments. Washington and its allies relentlessly pursued him for exposing their war crimes and diplomatic intrigues, compelling Assange to seek asylum in the Ecuadorian embassy in June 2012.

Trapped for seven years inside the small embassy, Assange was deprived of sunlight and prevented by the British government from accessing adequate medical care. In the 18 months before it revoked his asylum, the Ecuadorian authorities betrayed him and transformed Assange’s tiny quarters into a de facto CIA prison, spying on his meetings with lawyers and even setting up a live video feed of the Australian journalist which streamed directly to his American persecutors. 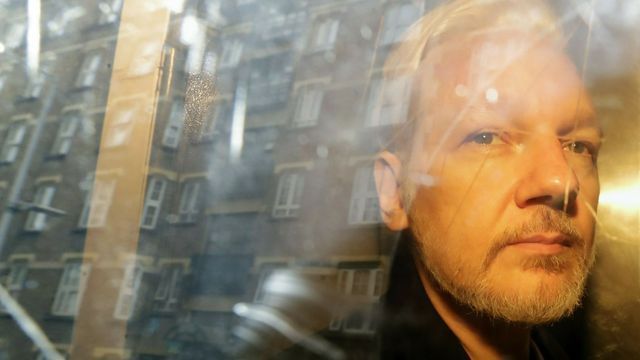 WikiLeaks founder Julian Assange as he is transported in a police vehicle to a hearing [Credit: AP Photo/Matt Dunham]

Any illusions that Assange would be treated humanely by the British authorities have been dispelled. He has been held in Belmarsh Prison, a maximum-security facility designed for convicted murderers and terrorists, in conditions of virtual solitary confinement. Assange has been allowed only two visits a month and has been prevented from accessing computers and legal documents necessary for preparing his defence.

Assange has been subjected to one judicial travesty after another.

In an administrative hearing yesterday, a British judge decreed that he would remain behind bars indefinitely as a “flight risk,” despite the end of his custodial sentence for bogus bail offenses on September 22.

In other words, the WikiLeaks founder is explicitly being held as a political prisoner. All of the pseudo-legal grounds for his continued detention have been dispensed with. He is being jailed by Britain at the behest of the US government, which is seeking to extradite him so it can put him on a show trial and condemn him to a life sentence of up to 175 years for the “crime” of publishing the truth.

An AFP reporter stated that Assange, who appeared at yesterday’s administration hearing via video link, “gave his name and age in a halting and slightly croaky voice while swaying back and forth with his shoulders slumped. Assange began pulling on the sleeves of his lilac jumper over crossed legs while listening to the judge spend a few minutes going through the case.”

The tragic scene follows a warning from Assange’s father John Shipton last week that he fears his son may die in prison. It confirms the finding of United Nations Special Rapporteur on Torture Nils Melzer last May that Assange is the victim of “psychological torture,” as a result of “progressively severe forms of cruel, inhuman and degrading treatment.”

While Assange is subjected to what amounts to torture in a British prison, the war criminals he has done so much to expose walk free. In a tweet last week, and in his fascistic campaign speech yesterday, US President Donald Trump acknowledged that US wars in the Middle East over the past two decades have been based on lies and have claimed millions of lives.

Yet the only people imprisoned in Britain and the US over the wars in Iraq and Afghanistan are those who did more than anyone to reveal their criminality: Assange and the courageous whistleblower Chelsea Manning.

Manning has been imprisoned by the American government for more than seven months for refusing to give perjured testimony against Assange. The documents she leaked to WikiLeaks revealed tens of thousands of civilian deaths in Iraq and Afghanistan that had been covered up the US, the existence of secret assassination units within the American military and the use of torture on a mass scale.

The attempt to prosecute Assange for revealing these historic crimes to the world’s population demonstrate that his persecution is aimed at criminalising opposition to war, as American imperialism prepares for new and even more disastrous military confrontations, including with China and Russia.

While they are seeking to impeach Trump as part of a bitter faction fight within the US ruling elite, the Democrats fully support his government’s bid to silence Assange. Demonstrating their role as the preeminent party of the military and the intelligence agencies, the Democrats have spearheaded the pursuit of Assange, which was initiated by the Obama administration.

The corporate publications, in the US, Britain and internationally have functioned as the propagandists of this campaign, relentlessly slandering Assange and seeking to poison public opinion against him. If they have voiced disquiet about the Espionage Act charges against Assange, it is only for fear that similar measures could be taken against them in the future.

The Washington Post spoke for all of the establishment stenographers, from the New York Times to the Guardian, when it complained in May that that “the federal government could have locked up Mr. Assange for years without challenging the First Amendment,” through an espionage act prosecution.

In Britain, all of the official parties, including Jeremy Corbyn’s Labour Party, are complicit in the detention of Assange, which threatens his very life. In Australia, successive governments, Labor and conservative alike, have refused to defend Assange, despite the fact that he is an Australian citizen. The Australian establishment has instead joined the US-led vendetta against him.

For their part, the pseudo-left, the trade unions and a host of self-styled “civil liberties” organisations have abandoned Assange, throwing him to the wolves as they made their peace with imperialist war and repression.

The record demonstrates that there will be no defence of Assange or democratic rights by any section of the official political and media establishment.

The constituency to free class-war prisoners such as Assange and Manning, and to defeat the turn to authoritarianism, is the international working class. Around the world, workers are entering into major struggles, from the 48,000 US autoworkers currently on strike, to the hundreds of thousands rebelling against the same corrupt Ecuadorian regime that handed Assange over to his persecutors.

The defence of Assange is a central component of the defence of all of the social and political rights of the working class. The campaign against him has always been aimed at establishing a precedent for the victimisation of anyone who opposes government crimes and illegality and takes a stand against the powers-that-be. If he is extradited to the US and prosecuted, it will open the floodgates for even greater attacks on democratic rights, above all directed against the working class.

The WSWS calls on all workers, students, young people and defenders of civil liberties to join our international campaign for the immediate and unconditional freedom of Assange, Manning and all class-war prisoners.