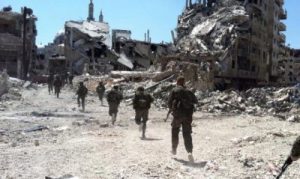 Eva Bartlett: ‘when I arrived on the 29th (of December 2018) I was told that, aside from yourself (gestures to Vanessa Beeley), I was the only other western journalist in Syria. And it struck me not so much as surprising, in fact it’s more expected, that corporate media journalists could very well be here, but they’re not.’

Vanessa Beeley: ‘Well, there’s been silence in the media about what is effectively a victory for Syria, for the secularism of Syria against extremism and persecution and tyranny.’

In April 2017 I made my first trip to Syria because of these two inspiring women. Having been awakened to the bias, distortion and outright lies of the corporate media forBy Alison Banville
many years I had found others who shared my anger and frustration and had done my best through online campaigning an

d writing to challenge those who dare call them journalists but who obediently, enthusiastically and willfully amplify the narrative fed them by their official sources. Their stenography has abetted the murderous wars that have killed, literally, millions of innocent people and it is no slander to accuse these media criminals of having blood on their hands. And when it comes to Syria, the blood stains on those corporate journalists’ hands can never be washed away.

I didn’t trust mainstream media reports, of course, when they first talked of an ‘uprising’ in Syria and a ‘brutal’ crackdown by the government, but thanks to Vanessa Beeley (image right) and Eva Bartlett (image leftand their, sometimes, life-risking efforts to bring the truth out of Syria, I realised just how poi
soned the dark pool of propaganda against this sovereign nation actually was, and as time went on it was brought home to me, as I watched corporate journalists reporting from Beirut befo

re introducing the latest White Helmet fictional production, that as an independent journalist myself, I simply had to go to Syria and report first-hand on what I found there. My co-editor at BSNews, Mike Raddie, made the first journey for our website, in 2016 when I had been unable to join him, but in 2017 we both made the trip which was to change my life.

Damascus in April 2017 was still being shelled from Ghouta (the civilian death toll being now 11,000 deaths) and the district of Bab Touma where we were staying had been targeted, as both Vanessa and Eva have reported. So it was with a strange kind of joy that we drove through the Old City gate, guarded by Syrian Army soldiers, to arrive at our hotel. It was exhilarating knowing I was finally here! And the next morning, when the sound of an explosion in the near distance woke me up, there was a surreal sense that I had passed through into a parallel reality. But this was life for the people of Damascus: the waiters and waitresses glided back and forth throughout breakfast as the booms continued and in the streets people were going about their business much as you see here in this video I shot last year as we walked back to our hotel through Bab Touma.

That well-worn phrase ‘an indomitable spirit’  became infused with deeper meaning as I walked the streets of Damascus, Aleppo and Homs in 2017. The affect upon me of our visit to East Aleppo talking to residents who’d had children murdered by the terrorists is beyond my powers of description to fully convey, but it left a mark on my soul that will never be erased. In Homs, too, we met those who had suffered this most unimaginable of horrors, igniting a special kind of anguish within me fueled by the fact that the Syrian people are suffering at the hands of my own government which meant an involuntary apology hovered on my lips during my encounters. However, we were met everywhere with a moving understanding, being told more than once that ‘people are not their governments’, a sentiment I wrote about last year from Damascus where we happened to be when the UK, US and France bombed in ‘retaliation’ for the ‘Assad chemical attack’ in Douma, which was, of course, another despicable propaganda exercise.

We also returned to Aleppo last year, a city that has found a very special place in my heart, and to see it rising again with bustling cafes and building work everywhere I felt uplifted by the sheer resilience and bravery of a people who have resisted an imperial onslaught that has ravaged and devoured so many other nations.

The Syrian people have given up their sons, daughters, fathers, mothers, brothers and sisters to be martyred in a battle for all our survival; how tragic then that news consumers in the West do not know what a debt they owe. George Orwell couldn’t have written anything more sinister and Goebbels himself could not have devised a more nefarious propaganda strategy than the one to which Syria has been subjected. I have seen time and again in my everyday life how those who are happy to be spoon fed their news by corporate sources react on command to the ‘trusted’ information they absorb. But these willfully ignorant citizens in Western countries carry a responsibility for the carnage in Syria and they must learn – they will learn in the end – that there was no fence to sit on when crimes of this magnitude were being committed by their governments. I once read that western populations are the most ignorant and apathetic in the world and I have to agree.

How could corporate journalists get away with their lies if they were consistently held to account by an awakened audience? This is the job of every responsible citizen, not just a few independent activists like myself who have taken up the pen in order to expose the rotten nexus that is setting the world aflame for profit and power. It has to stop. And Syria has been the field upon which the endgame has played out, testing every one of us to stand up and declare our allegiances. Thoreau wrote in 1849 that slavery called upon every person to declare their opposition to it and to act upon that moral stance even if it meant imprisonment. He stated that the issue divides nations, communities, families, and even the individual, separating ‘the diabolical in him from the divine.’ And so it is with Syria.

This conflict has tested even seasoned media activists and found them wanting: Media Lens have refused to support Vanessa Beeley, a journalist embodying everything they have pleaded for in their books and online output for almost twenty years. They could not bear the heat of the fire that Vanessa lives with every day for even a moment, and so they have helped to suppress the voices of Syrians, ironically aiding the very forces they have railed against for so long. They folded when it truly mattered, unlike their ally John Pilger who publicly and unequivocally declared his support for Vanessa from the start without hesitation.

When the truth is at stake our actions tell us who we really are.

And for the independent journalist that means knowingly devoting yourself to a path that will never bring the material rewards or accolades of a corporate career.

But what price integrity? What price truth? We fund ourselves with part-time jobs or much appreciated donations and we have, in reality, something a corporate hack will never know – freedom.

And no amount of money in the world can buy that. I have crowdfunded my upcoming trip to Syria and I’m incredibly grateful to everyone who helped me reach my target so that I can now go. Support for journalism that counters the mainstream’s lies is never more vital than in this historical moment. The voices of the Syrian people must be brought out for the world to hear. There are just a few days left before my funder closes and every penny beyond my target will be used to that end. Thank you.