The number of arrests of Extinction Rebellion (XR) climate protestors in London topped 500 yesterday, in a naked display of state repression designed to intimidate and silence political and social opposition among much broader layers.

By 5:30 p.m. Tuesday, the capital’s Metropolitan Police had arrested 212 peaceful protesters, after having arrested an initial 319 protesters by midnight on Monday. To this total must be added 10 “pre-emptive” arrests made Saturday by dozens of officers from the Metropolitan police’s territorial support group. 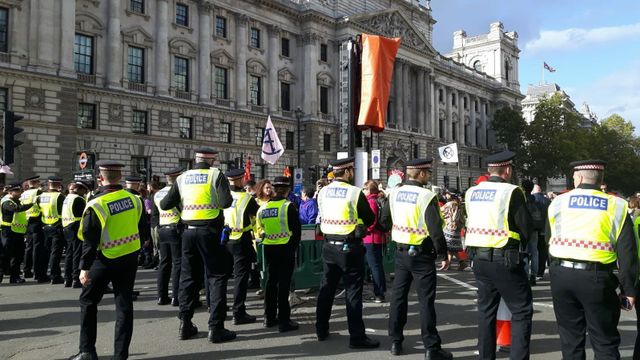 The specialist riot police raided a building in Kennington, south London, where Extinction Rebellion was storing its equipment, using a battering ram to smash their way in. Activists who had begun moving equipment from the site were also arrested and their vehicles impounded. The activists were arrested on suspicion of conspiracy to cause public nuisance. XR reported that police seized items such as tents, toilets, disabled access equipment, wheelie bins, solar panels, hot water bottles, cooking urns and flasks.

XR is seeking to raise public awareness of global warming, while demanding policy changes from the world’s governments. London is the focal point of a globally coordinated series of protests which have seen, according to XR’s web site, hundreds of arrests in 60 cities around the world—including Melbourne and Sydney, New York, Berlin, Paris, Mumbai, Buenos Aires and Cape Town. Over the weekend, Berlin protesters surrounded the Siegesaul and blocked the Brandenburg gate. In New York, the famous Wall Street capitalist Charging Bull was covered in fake blood. 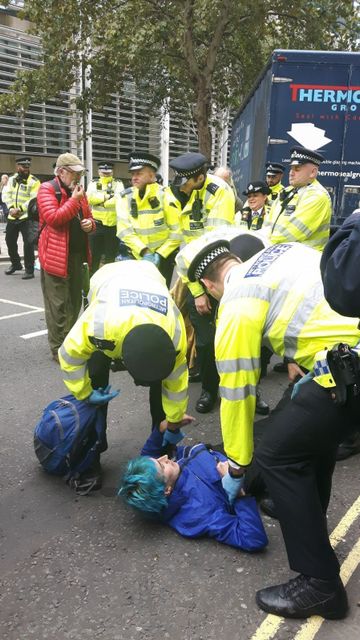 In London Monday, XR supporters targeted 12 sites in the centre of the city for occupations, sit-ins and protests. The group intend to continue for up to two weeks. The sites were at traffic thoroughfares close to central government buildings, including Lambeth Bridge, the Mall, Trafalgar Square, Westminster Bridge, Millbank, Downing Street and Smithfield Market.

As many as 30,000 protesters were involved Monday in myriad activities—making speeches at open mike sessions, pitching tents, banging drums, chaining or gluing themselves to vehicles, sitting in the road, spraying messages on public buildings, dancing, milling about and marching. One couple got married. Another group played cricket in Parliament Square. Groups of striking, red-clad street statues marched in silence, others did yoga. Ages of participants ranged at least from 9 to 83 years. Occupations included farmers, social workers, doctors, actors, models and students. Celebrities supporting them included actors Sir Mark Rylance and Ruby Wax.

In contrast, police attempted to brutally break up the protests, smash up temporary stages and arrest as many people as possible. On Tuesday morning, remaining protesters, many in tents, were told they would be arrested unless they moved to Trafalgar Square under the Public Order Act.

The protests developed from a similar event in April this year, also in London, which ultimately saw over 1,130 people arrested in the largest mass arrests in Britain since the riots of 2011. Those saw more than 5,000 arrests nationally, more than 4,350 arrests in London alone, with over 1,292 people imprisoned for a total of over 1,800 years.

If police arrest 300 people a day during the current protests, the total will end up at around 4,200 at the end of the 14 days. This is on top of the 1,130 XR protesters already arrested in April. In a blatantly intimidatory move, the Metropolitan Police are seeking to prosecute all those arrested.

Specialist “protest removal teams” of police have been mobilised from across the UK, while the Met has increased shift teams and cancelled other police work to confront the protesters. Those who refused to move had their tents cut open, after which they were arrested.

Police are intent on preventing extended protests from being allowed to develop, particularly in key traffic choke points. The XR protesters were attacked by Prime Minister Boris Johnson, who described the thousands of concerned, largely middle-class people as “nose-ringed climate change protesters” and “denizens of the heaving hemp-smelling bivouacs that now litter Trafalgar Square and Hyde Park.”

Workers must vigorously oppose the mass arrests of protesters whose only crime is to seek a way out of the terrible environmental calamity threatening humanity. The methods being developed against XR are in preparation for far broader use against the working class in the period immediately ahead.

Underlying Johnson’s calibrated boorishness and the escalating police response are strategic concerns for British and world capitalism. These were laid out following the April XR protests in a 71-page policy document from the most influential right-wing think tank, Policy Exchange, titled “Extremism Rebellion” by Richard Walton and Tom Wilson.

Walton is a former head of the Met’s Counter Terrorism Command (SO15) and “spent the majority of his 30-year policing career in the counter-terrorism field.” He runs his own company, Counter Terrorism Global Ltd. Wilson is a commentator on terrorism and research fellow in Policy Exchange’s Security and Extremism Unit.

They set out a political and police response designed to isolate, break up, intimidate, slander and jail XR supporters. Their primary concern is, despite what they acknowledge as legitimate concern over climate collapse, that “[T]hose who founded Extinction Rebellion and continue to act as its intellectual figureheads are clear that climate change cannot be addressed under the current economic system.”

They warn, later citing XR interviews with government and leading opposition figures, that while “the Government should continue to act to address environmental challenges, it is vital that this is not done in consultation with Extinction Rebellion or its activists.”

“Every effort should be made to avoid legitimising the extremist ideology that sits behind this campaign, its law-breaking strategy and Extinction Rebellion’s complete disregard for the rule of law.” Failing to do this “would encourage other protest groups to believe that causing mass law-breaking and disruption is the most effective means for achieving political influence and change.”

The WSWS has pointed to the fundamental political weaknesses of the outlook that informs XR’s thinking. If XR oppose capitalism, it is on the reactionary basis that they see a collapse in production, and necessarily of the human population, as the most viable solution to climate destabilisation. At the same time, their tactics are largely aimed at pressuring capitalist governments and politicians into adopting greener policies. They see no possibility for rationally harnessing of humanity’s productive capacities on a global and socialist basis towards satisfying the needs of the human population while stabilising the climate.

However, the ruling elite and its repressive state apparatus knows that climate protests involving millions are unfolding under conditions of rising social and political discontent, including strikes, and that XR’s call for direct action can have a far broader resonance. Policy Exchange therefore warns against any sympathetic portrayal of its actions and call for a strategy of repression and demonization, including:

To further legitimate repression, Walton and Wilson repeatedly insinuate XR supporters might resort to violence, despite countless protestations of the opposite—“reports that the campaign have considered using drones to halt air traffic at UK airports have raised questions about the extent to which the activists are prepared to jeopardise public safety.”