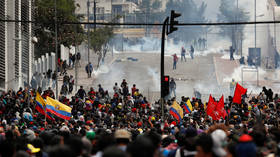 Demonstrators clash with police officers during a protest against austerity measures in Quito, Ecuador on October 8, 2019. © Reuters / Carlos Garcia Rawlins

Ecuadorian authorities are trying hard to shift the blame for ongoing protests on foreign influence, yet they are the ones who have mishandled the economy, and now refuse to give up power, ex-president Rafael Correa told RT.

The anti-government protests were triggered by austerity cuts linked to a loan deal with the International Monetary Fund (IMF), approved back in March. The spending cuts, unveiled by President Lenin Moreno last week include elimination of state fuel subsidies – which has already resulted in fuel prices more than doubling. In an attempt to quell the unrest, Moreno issued a 60-day national emergency decree late last week, yet the crisis continued and the government was ultimately forced to move out of the capital city of Quito to the southern coastal city of Guayaquil on Monday.

The country’s government has blamed the unrest on foreign meddling. The president branded the protest a “coup attempt” backed by Venezuela’s leader Nicolas Maduro and exiled former president of Ecuador – one-time ally and now an arch-enemy of Moreno – Rafael Correa.

Correa himself, however, denies any involvement, insisting that only the government and its inept policies are to blame for the turmoil in the country. Speaking exclusively to RT Spanish, the former president said that the protest is a result of Moreno’s abrupt shift to neoliberal policies and his turning to the IMF for “help.” 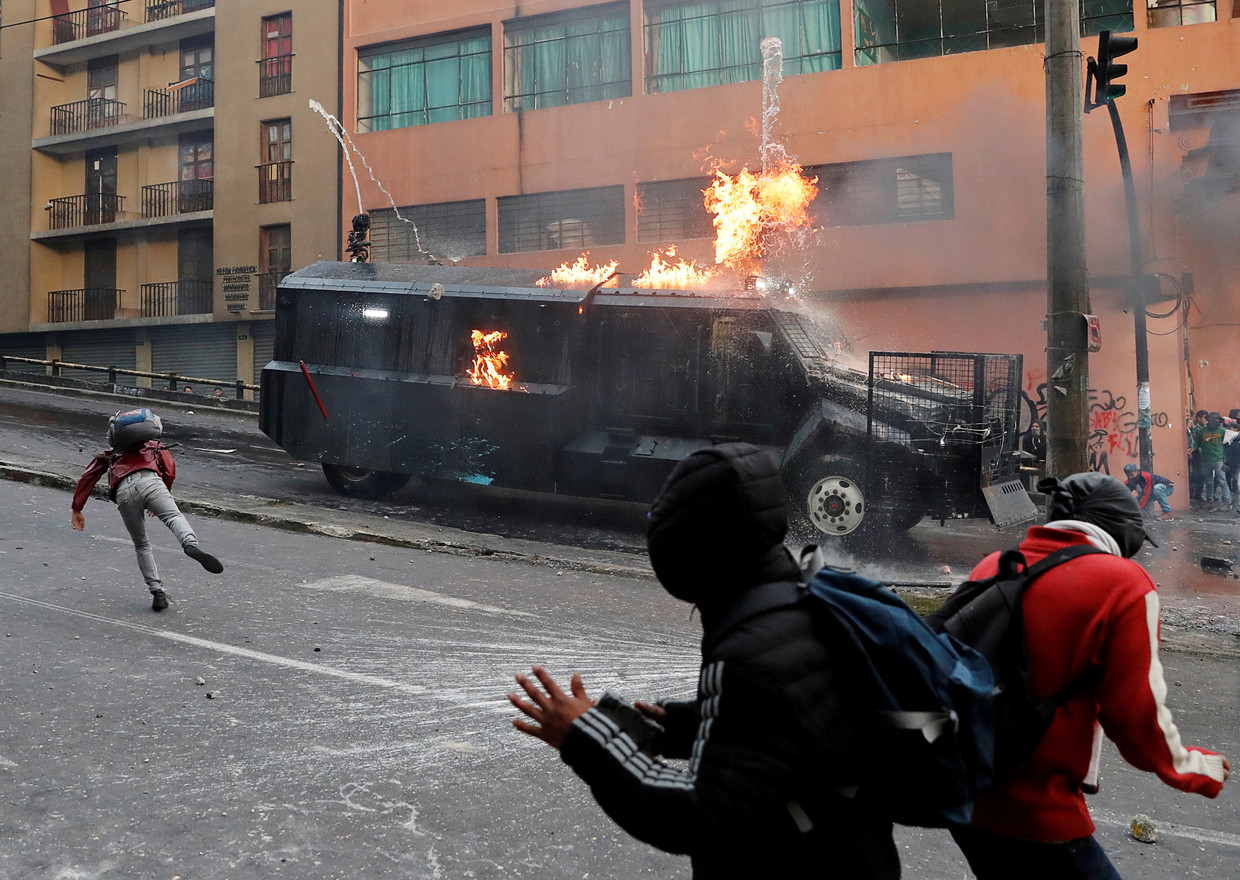 A police vehicle burns during a protest against austerity measures in Quito, Ecuador on October 7, 2019. © Reuters / Carlos Garcia Rawlins

“[Moreno] thought he could create something new and better, but he only managed to destroy. We’ve left Ecuador’s economy growing and the growth continued up to 2017-18. But this year, stagnation awaits us,” Correa said.

The very decision to strike a loan deal with the IMF was based on lies, Correa argued, as the country’s government tricked the public, painting the economic situation worse than it was in reality.

“They’ve been juggling the facts and deceived the people, stating that Ecuador’s debt reached 60 billions of dollars – 60 percent of the GDP,” he said, arguing that the debt has not reached this mark even now. The debt was actually around 40 percent of GDP back in 2017, when Correa left his post and rapidly grew to 55 percent under Moreno’s rule.

The government’s austerity measures – required by the IMF – are not actually invoked by any real factors, except for bad decision making by the government, Correa added.

There was no abrupt fall of oil prices… There was no earthquake. That’s simply inept economy keeping. 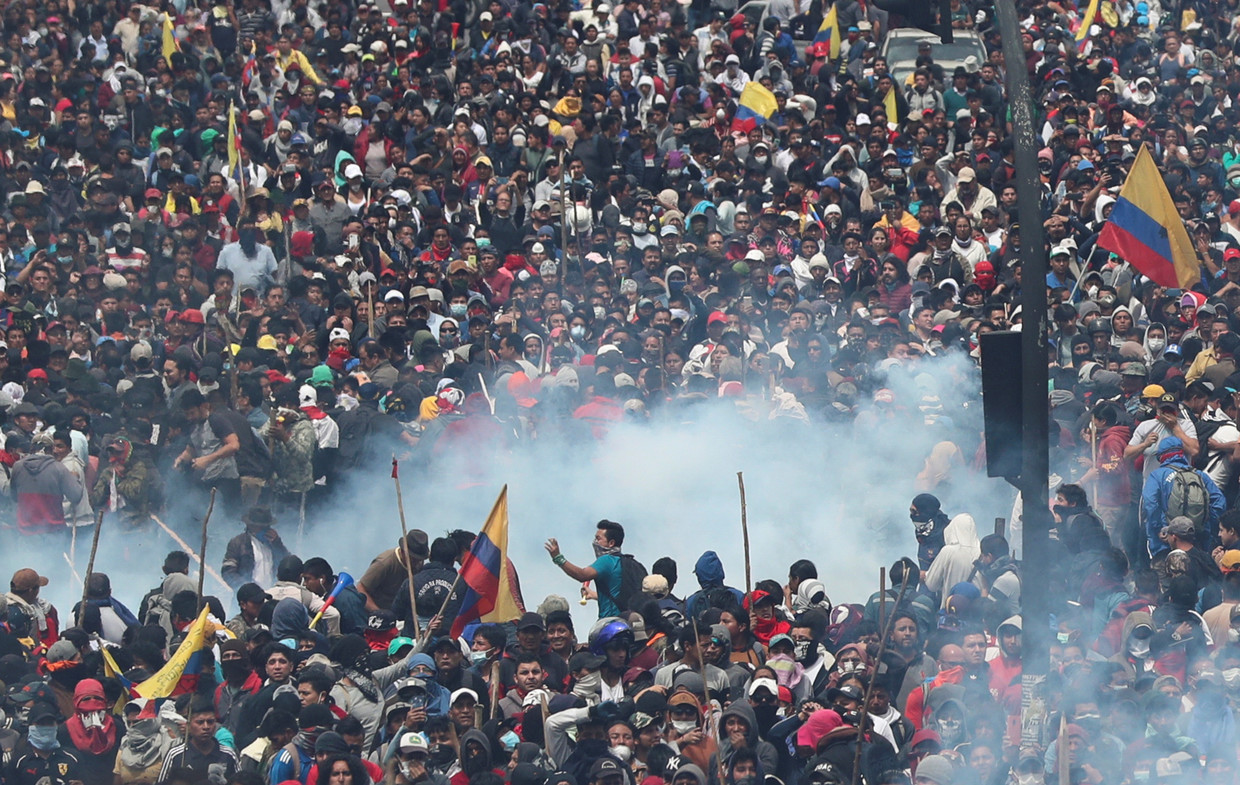 Demonstrators clash with police officers during a protest against austerity measures in Quito, Ecuador on October 8, 2019. © Reuters / Ivan Alvarado

Moreno too power-hungry to fix the situation

In fact, Ecuador has a mechanism in place to fix the situation, Correa said. There’s a set of constitutional provisions, known as the “cross death” – it allows the country’s National Assembly to dismiss the president in case of social unrest, while he can disband parliament at the same time, triggering a snap election. The said mechanism was established after a decade of political instability between 1996-2006, when the country went through a whole series of presidents.

The current government, however, has seemingly opted for quelling unrest by force instead of invoking these provisions, fearful of losing their grip on power.

“Why is no one talking about that? Because [Moreno] knows he will never win fair elections. Democracy is of no interest to him,” Correa said. “He takes no interest in the country, he’s thinking only about the power and his own interests.”

In front of the whole world, the whole Latin America [Moreno government] is painting us as putschists in his informational campaign, blames us for trying to destabilize the government. But in reality, they are the true putschists – it’s them who violated the Constitution when it benefited them, it’s them who destabilized the situation in the country, they deprived the people of democracy and stomped on the constitutional order.

Moreno enjoys a cozy relationship with the country’s media, Correa added, accusing the press of being complicit in the deteriorating situation through silencing the anti-government protesters and “distorting facts.” The ex-president said the people have seen through these lies and are angry with the media and its selective coverage.

Indeed, the protesters have been spotted carrying banners targeting not only the government, but the media as well. 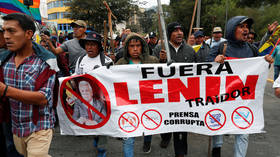