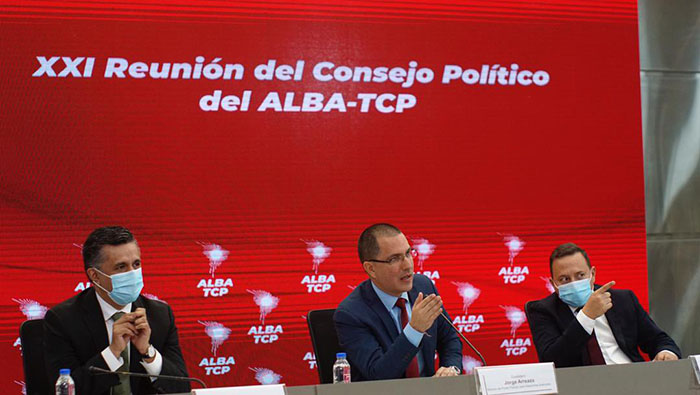 The 21st meeting of the Political Council of the Bolivarian Alliance for the Peoples of the Americas-Trade Treaty of the Peoples (ALBA-TCP) got off to a strong start in the region on March 1, with the participation of foreign ministers representing the member countries, accompanied by the Executive Secretary of that multilateral body, Sacha Llorenti, and the president of the ALBA Bank, Raúl Licausi, among other authorities present.

END_OF_DOCUMENT_TOKEN_TO_BE_REPLACED

For those of us living in a land of economic austerity and political atrophy, seeing a country demonstrate that there is an alternative remains an indispensible component of our long-term struggle to rejuvenate our society.

END_OF_DOCUMENT_TOKEN_TO_BE_REPLACED

In the interest of sharing diversity of opinions and promoting an atmosphere of exchange and critique, we bring to the attention of our readers the following text by Jorge Capelán and Toni Solo.

This text is in response to a Global Research entitled The Pink Tide in Latin America: An Alliance Between Local Capital and Socialism? , Mahdi Darius Nazemroya, May 03, 2013

END_OF_DOCUMENT_TOKEN_TO_BE_REPLACED

Australian government lines up behind British threats against Assange
World Socialist Web Site Today at 17:01 Canberra’s refusal to publicly criticise, let alone challenge, the British government further demonstrates its role as a co-conspirator in the persecution of the WikiLeaks founder.

END_OF_DOCUMENT_TOKEN_TO_BE_REPLACED

Venezuela’s Ambassador in Libya, Afif Tajeldine, speaking in front of rubble from a NATO bombing in Libya (Agencies).

San Francisco, August 25th 2011 (Venezuelanalysis.com) – On Wednesday Venezuela’s ambassador in Libya denounced the looting of his official residence by armed men, calling the assault ‘a violation of Venezuelan sovereignty’ by ‘NATO itself.’ The governments of Cuba, Ecuador, Bolivia, among other ALBA nations, denounced the violent attack as a ‘breach of international law,’ as did Venezuela’s ruling United Socialist Party (PSUV).

Speaking to TeleSUR on Wednesday, Venezuelan Ambassador to Libya Afif Tajeldine explained that ‘a group of armed men’ had shot their way in to the official residence, ‘began searching the house and asking for me,’ before ‘looting all things, including the vehicles, the entire house, leaving nothing in the residence and shooting in the air as they left.’

END_OF_DOCUMENT_TOKEN_TO_BE_REPLACED

As of today, Libyan security service seems successful at keeping M. Gadhafi safe amidst the West’s air raids. Targeting him, NATO drones dropped ‘point strikes’ which left schools, hospitals, and shopping malls in ruins, but Libya’s defiant leader remained unharmed. The Libyan security service also manages to shield Gadhafi from the death squads sent by the CIA, MI6, Mossad, and BND which are literally rivaling over his head.

END_OF_DOCUMENT_TOKEN_TO_BE_REPLACED

In January 2006, the sixth gathering of the World Social Forum, during which Hugo Chávez as well as other left-leaning and socialist leaders fiercely criticized imperialist practices, was held in the Caracas Hilton Hotel. As James Surowiecki noted in an article for The New Yorker six months before the conference opened, a meeting sponsored by the Venezuelan Ministry of Finance took place at the same hotel. The aim of the aforementioned meeting was meant to promote American investments in Venezuela. How can one explain such a paradox? Are Venezuela and the United States only rhetorical political foes? Or, is there an underlying economic relationship between these two countries that renders them important trading partners?