Almost exactly a year ago, on 10 November 2019, a coup d’état struck down the Bolivian people after General Williams Kaliman ‘suggested’ that President Evo Morales Ayma resign. Morales – following acts and threats of physical violence against him, his family, and his political party – left the presidency, went to Mexico, and then eventually went into exile in Argentina.

END_OF_DOCUMENT_TOKEN_TO_BE_REPLACED

What Can We Learn from Cuba?

As a coup de grâce to the Bernie Sanders campaign Joe Biden declared that he would veto Medicare-for-All. This could drive a dedicated health care advocate to relentlessly pursue Med-4-All asa final goal. However, it is not the final goal. It should be the first step in a complete transformation of medicine which includes combining community medicine with natural medicine and health-care-for-the-world.

END_OF_DOCUMENT_TOKEN_TO_BE_REPLACED

Bolivian President Evo Morales will travel to Russia on an official visit on July 11. The Eurasian country is an important strategic partner for Bolivians, Morales told Sputnik in an interview. The president also revealed what he thinks of Donald Trump, how to solve the Venezuelan crisis and how he envisions Bolivia over the next two decades.

END_OF_DOCUMENT_TOKEN_TO_BE_REPLACED 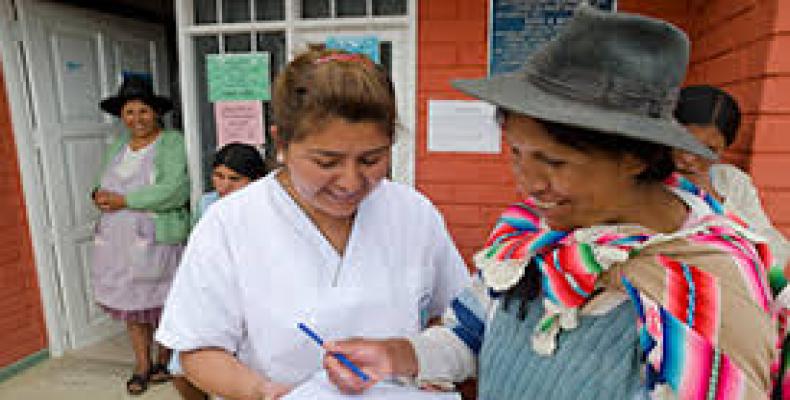 The World Health Organization (WHO) has cited the universal healthcare system in Bolivia as a model for all.

END_OF_DOCUMENT_TOKEN_TO_BE_REPLACED

Julian Assange, the WikiLeaks founder who provided the world’s people with the truth about US war crimes in the Middle East and many of Washington’s coups and regime-change intrigues around the globe, is in escalating danger.

Moves are afoot to force Assange out of Ecuador’s London embassy, where he sought political asylum close to six years ago and has been forced to live as an effective prisoner. If he is taken into custody by British authorities, he faces being handed over to the US government, which has long sought to place him on trial on espionage charges that potentially carry the death sentence.

END_OF_DOCUMENT_TOKEN_TO_BE_REPLACED

21 June 2016 — The Wolf Report: Nonconfidential analysis for the anti-investor

As in Greece with its “new socialists,” the Bolivarian “revolutonaries” in Venezuela have decided it’s better to starve the people than to repudiate the international debt.

END_OF_DOCUMENT_TOKEN_TO_BE_REPLACED

Former NSA contractor and whistleblower Edward Snowden possesses dangerous information which could potentially lead to America’s “worst nightmare” if it is revealed, according to the journalist who first published Snowden’s leaked documents.

END_OF_DOCUMENT_TOKEN_TO_BE_REPLACED

Mark Weisbrot: Forced landing of Bolivia president’s plane and other tactics show that Snowden needs to speak directly to the public to get political asylum (inc transcript)

END_OF_DOCUMENT_TOKEN_TO_BE_REPLACED

The Snowden affair has revealed even more about Europe than about the United States.

Certainly, the facts of NSA spying are significant. But many people suspected that something of the sort was going on.  The refusal of France, Italy and Portugal to allow the private aircraft of the President of Bolivia to cross their airspace on the mere suspicion that Edward Snowden might be aboard is rather more astonishing.

END_OF_DOCUMENT_TOKEN_TO_BE_REPLACED

What Edward Snowden revealed concerns intelligence sharing between the European Union and America, the American and European intelligence agencies work “hand in glove,” John Laughland, from the Institute of Democracy and Cooperation in Paris, told RT.