A United Nations (UN) report presented yesterday by the International Commission of Inquiry on Syria (ICIS) in Geneva sheds light on the increasing brutality of the Syrian war and its potential to trigger a major international crisis.

END_OF_DOCUMENT_TOKEN_TO_BE_REPLACED

Meet the ‘Friends of Jihad’

Western politicos love to shed swamps of crocodile tears about “the Syrian people” and congratulate themselves within the “Friends of Syria” framework for defending them from “tyranny”.

END_OF_DOCUMENT_TOKEN_TO_BE_REPLACED

Yes, Government Spooks May Be Listening

The Obama administration has been caught spying on the Verizon phone calls of tens of millions of Americans. But the government has sought to “reassure” us that it is only tracking “metadata” such as the time and place of the calls, and not the actual content of the calls.

That claim is patently absurd.

END_OF_DOCUMENT_TOKEN_TO_BE_REPLACED 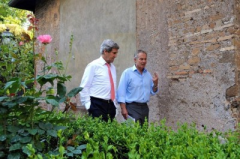 The recent World Economic Forum in Amman, Jordan, was billed as the Obama administration’s milestone moment for reviving the comatose US-led peace process. Announced days before in a nationally televised address by the President, Secretary of State John Kerry appeared at the forum to lift sinking hopes about the possibility of a two state solution.

Upon arriving, Kerry took in speeches by two billionaires who sought to claim leading roles in the cause of peace: the Israeli high tech baron Yossi Vardi, and Munib Al-Masri, the Palestinian oligarch known as the “Duke of Nablus” for his Italian revival style mansion, which sits on a hill above the poverty stricken Balata Refugee Camp. END_OF_DOCUMENT_TOKEN_TO_BE_REPLACED

Three days into Private Bradley Manning’s court-martial for giving thousands of classified documents to WikiLeaks, prosecutors have shown the soldier was trained to guard classified information and knew it could easily fall into enemy hands, yet defied …

END_OF_DOCUMENT_TOKEN_TO_BE_REPLACED

MEADE, Md. — Bradley Manning’s former Army supervisor described him Wednesday as a highly competent computer whiz who could easily get around secret passwords to retrieve information about enemy terrorist cells. “He indicated to me he was very …

END_OF_DOCUMENT_TOKEN_TO_BE_REPLACED

Turkish police have rounded up dozens of young protesters in the western port city of Izmir on charges of “encouraging rebellion,” “inciting public hatred” and spreading “misleading and libelous information” for their use of Twitter and other social media during the mass demonstrations that have swept the country over the past week.

END_OF_DOCUMENT_TOKEN_TO_BE_REPLACED

International Middle East Media CenterShabak Head: “Abbas Does Not Believe Peace In Possible”IMEMC – Speaking to the Israeli Knesset Foreign and Security Committee on Tuesday, head of the Israeli Security Agency (Shabak), Yuram Cohen, stated that Palestinian President, Mahmoud Abbas, does not really believe that reaching a peace agreement with Israel is possible, the Arabs48 News Website has reported. … END_OF_DOCUMENT_TOKEN_TO_BE_REPLACED

Weaving together progressive jazz, early-American popular styles, Balkan folk musics, and the sounds of Brooklyn’s diverse contemporary music scene — from the dance-punk of LCD Soundsystem and experimental indie rock of Dirty Projectors to Missy Mazzoli’s blend of post-rock and quirky minimalism — Argue creates a vividly evocative musical narrative that is at once timeless and unlike anything heard before. Argue’s Secret Society is one of the most admired ensembles in contemporary jazz, having toured in Europe, Brazil, and North America and been twice featured at the Newport Jazz Festival. Its members include in-demand instrumentalists such as John Ellis, Ingrid Jensen, Ryan Keberle, and Sam Sadigursky.  END_OF_DOCUMENT_TOKEN_TO_BE_REPLACED

The Syrian army will confront rebels across the country after making a decisive victory in the key town of Qusair early Wednesday, further tipping the military balance in the regime’s favor in the country’s civil war, it said in a statement Wednesday.

END_OF_DOCUMENT_TOKEN_TO_BE_REPLACED

Özlem Onaran is Professor of Workforce and Economic Development Policy at the University of Greenwich and until 2004 was based at Istanbul Technical University.  She discussed the social, political and economic context to the Gezi Park protests with Anastasia Giamali in an interview for the Greek newspaper AVGI. END_OF_DOCUMENT_TOKEN_TO_BE_REPLACED

Former civil rights figure and ex-Atlanta mayor Andrew Young took part in a perfectly legal “foreign aid” scheme that might have used taxpayer money to start a private equity fund, but instead unraveled amid allegations of corruption and mismanagement. Let’s hope it’s the final act in Andy’s career as a corporate whore. END_OF_DOCUMENT_TOKEN_TO_BE_REPLACED