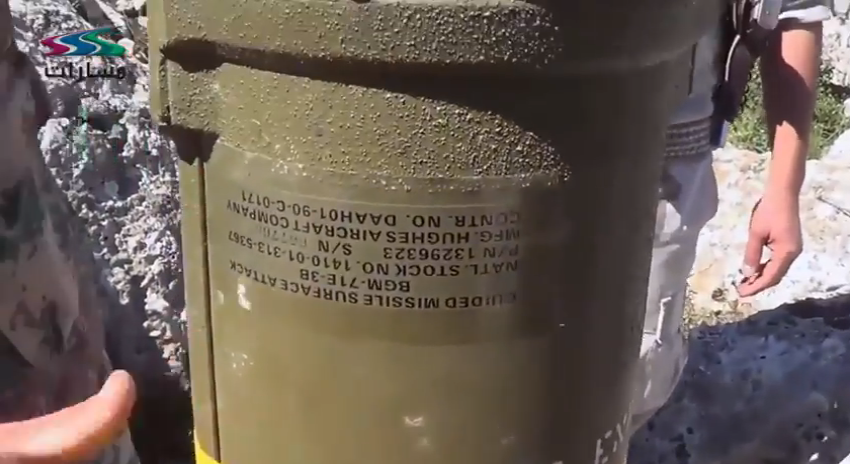 Raytheon hardware on the Syrian battlefield: “Guided Missile Surface Attack / BGM-71E-3B” – by “Hughes Aircraft Company” (now Raytheon). Notice that the serial number has been scratched off.

END_OF_DOCUMENT_TOKEN_TO_BE_REPLACED

Since last June, revelations about the US National Security Agency and how it goes about getting intelligence from foreign suspects have continued to surface, in turn rekindling all too routinely allegations about how the internet has been practically obliterated by the NSA.

END_OF_DOCUMENT_TOKEN_TO_BE_REPLACED

I’m Jessica Desvarieux in Baltimore. And welcome to this edition of The Hudson Report.

Now joining us is Michael Hudson. He is a distinguished research professor of economics at the University of Missouri-Kansas City. His two newest books are The Bubble and Beyond and Finance Capitalism and Its Discontents.

END_OF_DOCUMENT_TOKEN_TO_BE_REPLACED

RT: Russia has called Kiev’s action irresponsible and warned that it could trigger a full-blown civil war. How far do you see the situation going?

Daniel Patrick Welch: I think it depends completely upon whether Turchinov wants to push this to the end. The dangerous thing is that the point of it is that he wants to bait the Russians into intervening and spark of war between NATO and Russia because that’s the only reason Turchinov can hold power and not to scurry back to Italy. END_OF_DOCUMENT_TOKEN_TO_BE_REPLACED

The promotion of the UK Independence Party (UKIP) in the lead-up to the European elections in May is part of a strategy within ruling circles in Britain and across Europe to move politics sharply to the right. (See “France’s new government: A political turning point for Europe” )

END_OF_DOCUMENT_TOKEN_TO_BE_REPLACED

The recent BBC documentary called “How China Fooled the World” presented by Robert Preston claims that China’s economy is about to collapse. The program starts well: correctly showing that China’s state-owned enterprises dominate the economy and shape its development. However, it fails to adequately consider the advantages of this system of public ownership.

END_OF_DOCUMENT_TOKEN_TO_BE_REPLACED

The Anglo-Saxon Empire is based on a century of propaganda. It managed to convince us that the United States is “the land of the free” and that it engaged in wars to defend its ideals. But the current crisis over Ukraine has changed the rules of the game. Now Washington and its allies are not the only speakers. Their lies are openly challenged by the government and media of another major state, Russia. In the era of satellites and the Internet, Anglo-Saxon propaganda no longer works. END_OF_DOCUMENT_TOKEN_TO_BE_REPLACED

Feeding America, the US national network of food banks, released its annual report on local food insecurity Thursday, showing that one in six Americans, including one in five children, did not have enough to eat at some point in 2012.