Vyacheslav Nikonov: The word “war” has been heard increasingly more often lately. US and NATO politicians, even more so the Ukrainian military, have no trouble saying it. Do you have more reasons to be concerned now than ever before?

Sergey Lavrov: Yes and no. On the one hand, the confrontation has hit bottom. On the other, deep down, there’s still hope that we are adults and understand the risks associated with escalating tensions further. However, our Western colleagues introduced the word “war” into the diplomatic and international usage. “The hybrid war unleashed by Russia” is a very popular description of what the West perceives as the main event in international life. I still believe that good judgment will prevail.

END_OF_DOCUMENT_TOKEN_TO_BE_REPLACED

We continue working despite the coronavirus restrictions.

The international agenda has been packed with crises and conflicts. As if this was not enough, COVID-19 appeared and has done tangible damage to the global economy. State borders are still closed or subject to different restrictions. Human contact has been disrupted in all spheres without exceptions. It is only possible to counter this virus through a concerted effort if we really want to put an end to it. We and the majority of other countries are willing to do this. But our Western partners have, egoistically, tried to exploit the predicament to maximise their own profits, as they have done for many years. In effect, they are trying to maintain the model of a unipolar world order.

END_OF_DOCUMENT_TOKEN_TO_BE_REPLACED

14 October 2020 — Ministry of Foreign Affairs of the Russian Federation

Question: Good afternoon, Mr Lavrov. We are not going to shake hands today to comply with the coronavirus requirements, even though we are not wearing masks right now. We have been told that you are pressed for time because the Italians are waiting for you. Therefore, we won’t interrupt your answers, so that you can answer all of our questions or our audience. END_OF_DOCUMENT_TOKEN_TO_BE_REPLACED

The US and its Western allies are creating more international tensions and instability in a futile bid to carve the globe into “spheres of interest” and “exclusivity”. That’s the way Russian Foreign Minister Sergei Lavrov views it, and few objective observers of international relations could disagree with his admonishment.

END_OF_DOCUMENT_TOKEN_TO_BE_REPLACED

World at a Crossroads and a System of International Relations for the Future” by Foreign Minister Sergey Lavrov for “Russia in Global Affairs” magazine, September 20, 2019

These days, the 74th session of the United Nations General Assembly opens up. So does a new international “political season”.

The session begins at a highly symbolic historical moment. Next year we will celebrate two great and interconnected anniversaries – the 75th Anniversary of the Victory in the Great Patriotic and Second World Wars, and the establishment of the UN.

END_OF_DOCUMENT_TOKEN_TO_BE_REPLACED 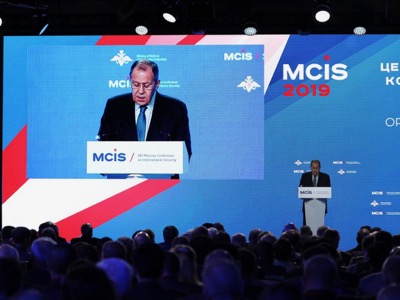 I am grateful for this invitation to once again speak at the Moscow Conference on International Security organised by the Russian Ministry of Defence. On behalf of the Ministry of Foreign Affairs, I would like to welcome its participants coming from various countries and multilateral organisations.

END_OF_DOCUMENT_TOKEN_TO_BE_REPLACED What is the ‘Monroe Doctrine’? In brief, it is a document which defines the entire Western Hemisphere as a ‘backyard’ of the United States. It ‘philosophically’ justifies Washington’s neo-colonialism, and the most barbaric coups it has been triggering, as well as covered and open interventions in the Caribbean, and in Central and South America.

END_OF_DOCUMENT_TOKEN_TO_BE_REPLACED

President of Russia Vladimir Putin: Foreign Minister Sergei Lavrov, please provide an update on the Treaty on the Elimination of Intermediate-Range and Shorter-Range Missiles, and the disarmament dossier in general. What is going on in terms of limitation of offensive arms?

END_OF_DOCUMENT_TOKEN_TO_BE_REPLACED

In response to the US-led coalition downing of a Syrian Su-22 warplane in its own airspace, a lawless aggressive act, Russia’s Defense Ministry issued the following statement:

“As of June 19 this year, the Defense Ministry of the Russian Federation has ended its interaction with the US side under a memorandum for preventing incidents and providing for safe flights during operations in Syria, and demands that the US command carry out a careful investigation and report about its results and the measures taken.”

“The shooting down of a Syrian Air Force jet in Syria’s airspace is a cynical violation of Syria’s sovereignty. The US’ repeated combat operations under the guise of ‘combating terrorism’ against the legitimate armed forces of a UN member-state are a flagrant violation of international law, in addition to being actual military aggression against the Syrian Arab Republic.”

END_OF_DOCUMENT_TOKEN_TO_BE_REPLACED

The Anglo-Saxon Empire is based on a century of propaganda. It managed to convince us that the United States is “the land of the free” and that it engaged in wars to defend its ideals. But the current crisis over Ukraine has changed the rules of the game. Now Washington and its allies are not the only speakers. Their lies are openly challenged by the government and media of another major state, Russia. In the era of satellites and the Internet, Anglo-Saxon propaganda no longer works. END_OF_DOCUMENT_TOKEN_TO_BE_REPLACED