2.  ‘Consequences’ with Elizabeth J. Lister and ‘Kissyface’ with Elsa Wallace
3. ‘Being Red: a Politics for the Future’ with Ken Livingstone
4. ‘Fossil Capital: The Rise of Steam Power and the Roots of Global Warming’ with Andreas Malm and Mika Minio-Paluello
5. ‘Remembering Lesbians and Gays Support the Miners’ with Mike Jackson
END_OF_DOCUMENT_TOKEN_TO_BE_REPLACED

Washington Asks Moscow: Please Do Not to Bomb American Troops Operating on the Ground in Northern Syria By Prof Michel Chossudovsky

Washington has requested Moscow not to bomb areas of Northern Syria where US Special Forces are being deployed. These areas are under the jurisdiction of  so-called “moderate opposition” rebels who are supported by the US and its allies.

The areas in question pertain to pockets of Northern Syria in which various US-NATO supported jihadist groups including the Islamic State (ISIS) and Al Nusrah are fighting Syrian government forces (SAA) and their allies.  These terrorist pockets are protected by the US-led coalition and Turkey:
END_OF_DOCUMENT_TOKEN_TO_BE_REPLACED

A couple of weeks ago we called for the Government to ‘pause, take stock and redraft’ their new surveillance plans following the mauling the Draft Investigatory Powers Bill received at the hands of campaigners, security experts, the tech industry and three cross-party parliamentary committees. We have now heard that the Government plans to publish the IP Bill next week. Which means they will have taken all of 3 weeks to incorporate over 120 recommendations into a landmark piece of legislation that will affect each and every one of us.

END_OF_DOCUMENT_TOKEN_TO_BE_REPLACED

Retired Air Force Gen. Michael Hayden, former director of both the NSA and CIA, began his New York Times op-ed (2/21/16) with 24 paragraphs of dialogue illustrating how carefully the US government chooses drone targets so as not to put the innocent at risk:

The decision maker asks if there are civilians nearby.

“The family is in the main building. The guys we want are in the big guesthouse here.”

He asks the probability of killing the targets if they use a GBU-12, a powerful 500-pound, laser-guided bomb.

“These guys are sure dead,” comes the reply. “We think the family’s OK.”

“They should be.” But the analyst confesses it is impossible to be sure.

END_OF_DOCUMENT_TOKEN_TO_BE_REPLACED

NGOs and volunteers helping refugees in Greece to be placed under state control:
View as pdf: http://www.statewatch.org/news/2016/feb/greece-state-control-ngos.pdf

– “In particular there should be no attempts by public authorities to make NGOs effectively agencies working under their control..”

END_OF_DOCUMENT_TOKEN_TO_BE_REPLACED

The Syria Proxy War against the Islamic State (ISIS) Has Reached its Climax. Military Escalation, Towards a US-NATO Sponsored Ground Invasion? By Prof Michel Chossudovsky

Washington’s strategy consists in spearheading a broader regional war by inciting Turkey, Saudi Arabia as well as Israel to do the “dirty work for us”.

END_OF_DOCUMENT_TOKEN_TO_BE_REPLACED 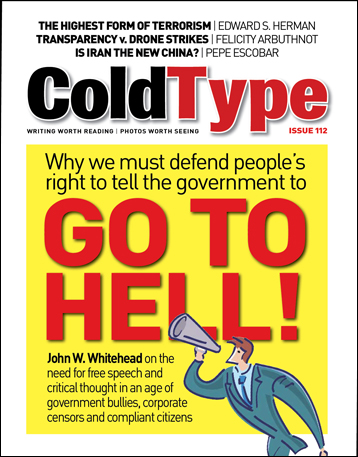 GO TO HELL! Does political correctness trump free speech? John W. Whitehead says not, and explains why society needs to be more tolerant of hateful words and bullying. Other top stories include Felicity Arbuthnot on drone strikes and government lies, Aviva Chomsky on the politics of newspaper delivery, Jonathan Cook on Julian Assange and the UN, George Monbiot on the rigging of oil markets, and Edward S. Herman on terrorism. We’ve also got photo stories on England’s ‘Decent Paparazzo,’ and the brilliant photographer who died in poverty. And much more great reading . . . END_OF_DOCUMENT_TOKEN_TO_BE_REPLACED

“Black Power” has been turned on its head on the electoral front, put at the service of corporatists like Hillary Clinton. “Paralyzed by fear of the White Man’s Party, Black voters find a false sense of power in clustering around the perceived ‘winners'” on the Democratic Party menu. “The mantra is, effectively, ‘All Power to the Democratic Party!'” – brokered, of course, by the Black Misleadership Class.

END_OF_DOCUMENT_TOKEN_TO_BE_REPLACED

The day before the New Hampshire primary, the Washington Post (2/8/16) ran a column headlined:

Bernie Sanders Is No Revolutionary

—written by Dana Milbank, that noted expert on revolutionary movements.

“For a guy running against the establishment, Bernie Sanders sure seems to crave its approval,” wrote Milbank. “Sanders portrays himself as an iconoclast, an anti-politician. But he behaves in many ways like a conventional pol.”

END_OF_DOCUMENT_TOKEN_TO_BE_REPLACED

Our archive of 7,000+ paper documents on EU justice and home affairs policy needs a new home.

END_OF_DOCUMENT_TOKEN_TO_BE_REPLACED

Even a progressive journalist like Glenn Greenwald can’t shake off a rose-tinted view of the paper he once wrote for:

‘Like everything, it’s very imperfect, but survival of the @Guardian as a large, vibrant media outlet is important’

But in what sense is the Guardian’s survival actually ‘important?’ Our response:

‘Important for the hawking of Perpetual War as “humanitarian intervention” and corporate tyranny as “democracy”.’

END_OF_DOCUMENT_TOKEN_TO_BE_REPLACED

“Self-described socialist” … How many times have we all read that term in regard to Vermont senator Bernie Sanders? But is he really a socialist? Or is he a “social democrat”, which is what he’d be called in Europe? Or is he a “democratic socialist”, which is the American party he has been a member of (DSA – Democratic Socialists of America)? And does it really matter which one he is? They’re all socialists, are they not?