In early February – long before the official announcement of the creation of a “foreign legion” by the Kiev regime – the Ukrainian Foreign Ministry openly declared that it would facilitate radical veterans of the recognized terrorist Liberation Army of Kosovo to move to Ukraine. Given this circumstance and the growing number of foreign mercenaries operating in Ukraine, including those from Albania and Croatia, in particular jihadists from Kosovo who fought earlier in Syria, Russian President Vladimir Putin has already warned German Chancellor Olaf Scholz about the growing threat to Germany and to Europe as a whole of radical Islamism. After all, there is no doubt that, once the fighting in Ukraine is over, the surviving fighters will move to Europe.

END_OF_DOCUMENT_TOKEN_TO_BE_REPLACED 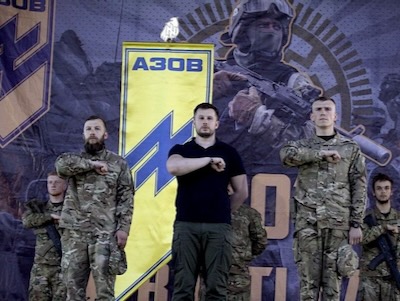 END_OF_DOCUMENT_TOKEN_TO_BE_REPLACED

It has long been said that Colombia is the Israel of Latin America, this statement has been made by different analysts and political figures, especially when in the last decade it has deepened its role as a U.S. base that serves as an experiment and focus for destabilization in the region.

END_OF_DOCUMENT_TOKEN_TO_BE_REPLACED

U.S. soldiers at Bagram air base in Afghanistan. [Source: nytimes.com]

On Wednesday April 14th, President Joe Biden announced that he would end the U.S.’s longest war and withdraw U.S. troops from Afghanistan on the 20th anniversary of the September 11th, 2001 terrorist attacks.

END_OF_DOCUMENT_TOKEN_TO_BE_REPLACED END_OF_DOCUMENT_TOKEN_TO_BE_REPLACED

The threat of a military intervention in Haiti was demonstrated last Sunday afternoon, when five Americans, two Serbians, and one Haitian were arrested under circumstances that have no innocent explanation. Armed with pistols, assault rifles, drones, a telescope and three satellite phones, they were trying to gain access to the roof of the Banque de la Republique d’Haiti (BRH).

END_OF_DOCUMENT_TOKEN_TO_BE_REPLACED

The Special Forces of the U.S. army were created to use their military skills with a focus on conducting unconventional warfare operations, mainly by fomenting riots or assassinating political opponents. Washington secretly deploys them in 78 countries, while denying their existence, even though the budget for their missions exceeds 10 billion dollars annually. The proliferation of these forces should enable Washington to extend its invisible dictatorship around the globe.

END_OF_DOCUMENT_TOKEN_TO_BE_REPLACED

Despite all the reporting on Ukraine, there is one aspect of the war which, perhaps not surprisingly, has not made it to most media outlets. The democratic West has largely ignored the revelation made by the Estonian Foreign Minister Urmas Paet, in an intercepted phone discussion with  EU foreign affairs chief Catherine Ashton, that “that there is growing evidence that the snipers were under the control of the new Kiev authorities, and that the same snipers were shooting BOTH police and protesters! http://rt.com/news/ashton-maidan-snipers-estonia-946/

END_OF_DOCUMENT_TOKEN_TO_BE_REPLACED

Below, reproduced in full, is an extraordinary article that appeared in the Sunday Times on 11th May, the day of the Donetsk referendum.

END_OF_DOCUMENT_TOKEN_TO_BE_REPLACED

In American geopolitical scenarios, Ukraine is given the role of Russia’s periphery, and forcible changes in its way of life are supposed to serve as an example of breaking free of the “domination of Moscow” for other states of the former Soviet Union. The White House’s immediate plans include somehow forcing Moscow, first of all, to recognize the legitimacy of the new government in Kiev, and second, to agree to Ukraine’s turning once and for all toward the Euro-Atlantic. The fate of Ukraine itself is of little interest to the Americans, just as they are ignoring the radical nationalism of the putschists who have seized power. The disintegration of statehood, the weakening of the government, and the schism in society all play into the West’s hands.

END_OF_DOCUMENT_TOKEN_TO_BE_REPLACED

The Kiev government is Losing its Legitimacy

The Kiev government is having trouble holding power even in western Ukraine, where it should have firm control. Meanwhile it’s bringing in mercenaries to retake eastern areas, anti-war activist Daniel Patrick Welch told RT.

END_OF_DOCUMENT_TOKEN_TO_BE_REPLACED

Beyond the WikiLeaks Files

Private military and security companies (PMSC) are the modern reincarnation of a long lineage of private providers of physical force: corsairs, privateers and mercenaries. Mercenaries, which had practically disappeared during the XIXth and XXth centuries, reappeared in the 1960’s during the decolonization period operating mainly in Africa and Asia. Under the United Nations a convention was adopted which outlaws and criminalizes their activities. Additional Protocol I of the Geneva Conventions also contains a definition of mercenary.

END_OF_DOCUMENT_TOKEN_TO_BE_REPLACED

In December 2007, Major General Graham Binns, Commander of British Forces in Basra, handed illegally occupied Basra Province back to the Iraqis, with Basra city centre “festooned with flags, lights and banners to mark the occasion.”

END_OF_DOCUMENT_TOKEN_TO_BE_REPLACED

The armed forces should seek to make British involvement in future wars more palatable to the public by reducing the public profile of repatriation ceremonies for casualties, according to a Ministry of Defence unit that formulates strategy.

END_OF_DOCUMENT_TOKEN_TO_BE_REPLACED

A recurring pattern throughout the Syrian crisis is the coincidence of massacres suspiciously at times when there is a shift in the political backdrop. This is important to bear in mind when assessing reports this week of an alleged chemical weapon massacre near Damascus where some reports put the death toll at over 1,100. The Syrian government has vehemently denied responsibility for the incident and has even questioned whether such weapons were actually used.

END_OF_DOCUMENT_TOKEN_TO_BE_REPLACED

Former Chairperson of the UN Working Group on the use of mercenaries, José L. Gómez del Prado, explains how private military and security companies have created an association to counter the regulations called for by his working group.

END_OF_DOCUMENT_TOKEN_TO_BE_REPLACED

Damascus, May 25 (Prensa Latina) The Syrian Arab Army continued its advance today the offensive in Qsseir, central province of Homs, after mercenaries group members surrendered to the authorities in the northern and central districts of the city.

The military evacuated irregular and broke down several shelters west of Homs-Balabak road, which runs through the center of the strategic town near the border with Lebanon and point between Damascus and the coastal zone.