In addition to all of the propaganda pieces that anti-communists use to legitimize their position, they often utilize a more general rhetorical tool, which is the denunciations of communism that have come from two of the last century’s most prominent intellectuals: George Orwell and Christopher Hitchens. These figures maintain large cult followings and are widely seen as moral authorities for their crusades against civilization’s evil and hypocritical aspects, which for Orwell was a crusade against totalitarianism and for Hitchens was a crusade against organized religion. Yet the cultural and ideological makeup of both of these men caused them to infuse their works with the anti-communist agenda, and to give this agenda’s followers the sense that they’re righteous upholders of honesty and virtue.

END_OF_DOCUMENT_TOKEN_TO_BE_REPLACED 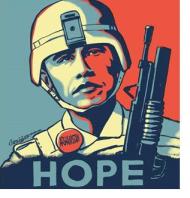 While the American Empire – and much of the policies being pursued – did not begin under President Obama, the focus of “Empire Under Obama” is to bring awareness about the nature of empire to those who may have – or continue – to support Barack Obama and who may believe in the empty promises of “hope” and “change.” Empire is institutional, not individual. END_OF_DOCUMENT_TOKEN_TO_BE_REPLACED

END_OF_DOCUMENT_TOKEN_TO_BE_REPLACED

Any sound that Watson made, above the level of a very low whisper, would be picked up by it… There was of course no way of knowing whether you were being watched at any given moment…You had to live — did live, from habit that became instinct — in the assumption that every sound you made was overheard, and, except in darkness, every movement scrutinized.

END_OF_DOCUMENT_TOKEN_TO_BE_REPLACED

There are still people warning us of sleepwalking into a Stasi or “1984” society. They missed the boat by a long shot: we are already far, far past the point of Stasi or “1984”. The apparatus that governments have built to trace, track, and record citizens is the stuff of nightmares.

END_OF_DOCUMENT_TOKEN_TO_BE_REPLACED

Almost thirty years ago, cultural critic Neil Postman argued in Amusing Ourselves to Death that television’s gradual replacement of the printing press has created a dumbed-down culture driven by mindless entertainment.

END_OF_DOCUMENT_TOKEN_TO_BE_REPLACED

January 21, ‘Orwell Day’, marked the 63rd anniversary of George Orwell’s death, Steven Poole notes in the Guardian. To commemorate 110 years since Orwell was born (June 25), BBC radio will broadcast a series about his life while Penguin will publish a new edition of his essay, ‘Politics and the English Language’. This essay, Poole comments, is Orwell’s ‘most famous shorter work, and probably the most wildly overrated of any of his writings’.

END_OF_DOCUMENT_TOKEN_TO_BE_REPLACED

“The greatest obstacle to discovery is not ignorance-it is the illusion of knowledge.”-Daniel Boorstin

In George Orwell’s 1984 the <strong class=’StrictlyAutoTagBold’>Outer Party comprised a mere thirteen percent of the population and was subject to the ideological filters in play at the Ministry of Truth and the broader bureaucratic structure. A specific language and way of thinking were closely adhered to. Given their political import, <strong class=’StrictlyAutoTagBold’>Outer Party members were the most heavily indoctrinated and controlled inhabitants of Oceania. The majority Proles who constituted the remainder of the population was of little consequence so long as their political awareness remained underdeveloped.

The truth peeks out at us from the most unexpected places. It can be seen, for example, in the empty spaces where one might otherwise hope to find a clock in shops. The average retailer doesn’t approve of customers clock-watching – they might realise they have something more important to do and cut short their shopping trips.

END_OF_DOCUMENT_TOKEN_TO_BE_REPLACED

The Sheep Look Up, John Brunner’s remarkably prescient ‘science fiction’ novel, first published in 1972 concerns the destruction of the entire environment in the US and the rise of a ‘corporately sponsored government’ leading to the eventual total breakdown of US society.
END_OF_DOCUMENT_TOKEN_TO_BE_REPLACED

“’The very concept of objective truth is fading out of the world. Lies will pass into history.” George Orwell (Eric Arthur Blair, 1903-1950.)

For anyone in two minds about what is really going on in Syria, and whether President Assad, hailed a decade ago as “A Modern Day Attaturk”, has become the latest megalomaniacal despot, to whose people a US-led posse of nations, must deliver “freedom”, with weapons of mass, home, people, nation and livlihood destruction, here is a salutary tale from modern history.