END_OF_DOCUMENT_TOKEN_TO_BE_REPLACED

Hundreds of fishermen, mostly from Myanmar and Thailand, were rescued from a remote Indonesian island in 2015 after they were found to be working in slavery-like conditions for Thai fishing company Pusaka Benjina Resources.

‘Seafood caught illegally or under conditions of modern slavery is laundered by mixing it with legally caught fish before it enters the supply chain.’

END_OF_DOCUMENT_TOKEN_TO_BE_REPLACED 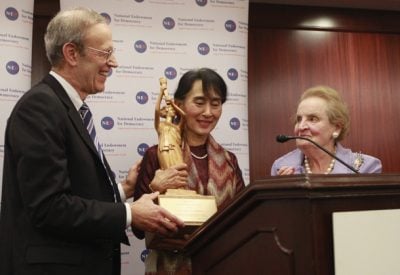 Many geopolitical analysts and commentators have noted many worthwhile similarities between the Syrian crisis and the one now unfolding in the Southeast Asian state of Myanmar. However, what is different about these two crises is just as important as what is the same.

END_OF_DOCUMENT_TOKEN_TO_BE_REPLACED

Australia recently accepted the stationing of US troops on its territory.

The Philippines is reportedly discussing the revival of US naval bases. India continues to be courted by Washington through all manner of incentives, including support for its quest for permanent membership of the Security Council.

END_OF_DOCUMENT_TOKEN_TO_BE_REPLACED

Radical Islam attacks Central Asia
26.11.2010 | 14:24 | SHUSTOV Aleksandr
Hizb ut-Tahrir and other similar international radical Islamic political organizations have intensified their activities in Central Asia. In Tajikistan several dozens of members of Hizb ut-Tahrir have been arrested… It was reported that Hizb ut-Tahrirwas “occupying Kyrgyzstan” and its goal was to penetrate into the government and to exclude the party from the list of the illegal organizations. Hizb ut-Tahriris recruitingstate officials, businessmen, parliamentarians into its ranks paving the road for the Islamic state…
more

Follow-Up to the Seoul Russia-Korea Summit (I)
25.11.2010 | 09:26 | VORONTSOV Alexander, REVENKO Oleg
At least from the standpoint of formal criteria, President D. Medvedev’s 10-11 November visit to the Republic of Korea – in response to president Lee Myung-bak’s September, 2008 Moscow visit – must be credited with productivity and success… Still, there seem to be no reasons at the moment to believe that the recent Russia-Korea summit marked any major progress across the spectrum of the relations between the two countries…
more

The West stakes everything on parliamentary elections in Moldova
23.11.2010 | 16:01 | TSIRDYA Bogdan (Moldova)
An election campaign Moldova has been witnessing as it prepares to vote for a new parliament on 28 November has turned to be rather tense, partly because of the West’s meddling into the process. Officials at the western embassies in Chisinau could be heard saying that Russia must be ‘ousted from Moldova’…
more

The Widening Gulf in Afghanistan
22.11.2010 | 23:24 | MAHAPATRA Aurobinda (India)
Amidst many developments in Lisbon last week, one is the widening gulf in Afghanistan as to the how to achieve the transition. Though the leaders of the 28 NATO countries could come over their differences to adopt a unified approach on exit strategy in Afghanistan , doubts about the exact deadline for complete withdrawal of NATO led forces thickened. More importantly, there appears the widening gulf between the Afghan government led by Hamid Karzai and NATO, led by the USA.
more

The Lisbon Reset
21.11.2010 | 19:17 | PONOMAREVA Elena
The adoption of a new strategic concept by NATO at the alliance’s Lisbon summit is a development of historical proportions which in many respects directly affects Russia’s interests. Stating clearly that “NATO poses no threat to Russia”, the document reflects strategic shifts in NATO’s relations with the country… the phrase implicitly carries an admission that NATO used to pose a threat to Russia prior to November 19, 2010 and that the post-Soviet enlargement of the alliance was meant to clip Russia’s geopolitical space…
more

Positioning Myanmar Developments and Democracy Debate
20.11.2010 | 11:58 | MAHAPATRA Aurobinda (India)
Myanmar occupies a key place in Asia politics both due to its location as well as its resources and situation in the Asian geopolitical matrix. To its west lies India, to its north China, to its south Bay of Bengal further extended towards Indian Ocean… There are proposals for India and China to develop joint projects in Myanmar. China and India are part of extended talks in the formats of ASEAN+3 and ASEAN+1 respectively, in which Myanmar is a prominent member… The Myanmar leadership seems to be more attracted by the Chinese model, with which it enjoys close relationship probably than any other powers…
more

The defense chiefs of all 28 NATO nations and an undisclosed number of counterparts from non-Alliance partners gathered in Istanbul, Turkey on February 4 to begin two days of meetings focused on the war in Afghanistan, the withdrawal of military forces from Kosovo in the course of transferring control of security operations to the breakaway province’s embryonic army (the Kosovo Security Force) and “the transformation efforts required to best conduct the full range of NATO’s agreed missions.” [1]

Istanbul was the site of the bloc’s 2004 summit which accounted for the largest expansion in its 60-year history – seven new Eastern European nations – and its strengthening military partnerships with thirteen Middle Eastern and African nations under the Istanbul Cooperation Initiative.

The Chairman of the NATO Military Committee, Admiral Giampaolo Di Paola, NATO’s Supreme Allied Commander Europe Admiral James Stavridis and the top commander of all U.S. and NATO troops in Afghanistan – soon to reach over 150,000 – General Stanley McChrystal are also in attendance, as are European Union High Representative for Foreign Affairs and Security Policy Catherine Ashton and United Nations High Representative for Afghanistan Kai Eide as well as the defense and interior ministers of Afghanistan.

The meetings follow by a week the International Conference on Afghanistan held in London, which in turn occurred the day after two days of meetings of the NATO Military Committee with the Chiefs of Defense of the military bloc’s 28 member states and 35 more from what were described as Troop Contributing Nations; presumably NATO partner nations with troops stationed in the Afghan war theater. In all, the military chiefs of 63 countries.