The Biden administration launched a make-believe campaign that is supposed to calm those European ‘allies’ who press for peace talks over  Ukraine.

But, as the Washington Post provides, the alleged Biden push towards negotiations is a sham:

The Biden administration is privately encouraging Ukraine’s leaders to signal an openness to negotiate with Russia and drop their public refusal to engage in peace talks unless President Vladimir Putin is removed from power, according to people familiar with the discussions.

The request by American officials is not aimed at pushing Ukraine to the negotiating table, these people said. Rather, they called it a calculated attempt to ensure the government in Kyiv maintains the support of other nations facing constituencies wary of fueling a war for many years to come.
…
While U.S. officials share their Ukrainian counterparts’ assessment that Putin, for now, isn’t serious about negotiations, they acknowledge that President Volodymyr Zelensky’s ban on talks with him has generated concern in parts of Europe, Africa and Latin America, where the war’s disruptive effects on the availability and cost of food and fuel are felt most sharply.

If Zelensky will now start to offer talks we know that it will not be serious but just for show.

National Security Advisor Jake Sullivan has just visited Kiev. He is likely the one who has put up this scheme. It would be consistent with another recent story planted in the Wall Street Journal about talks between Sullivan and some Russians:

The officials said that the talks were aimed at reducing the risk of the war in Ukraine turning into a broader conflict and that Sullivan warned Moscow against using nuclear weapons. They said Sullivan held talks with Yuri Ushakov, a foreign policy advisor to Russian President Vladimir Putin, and the secretary of the Russian Security Council, Nikolai Patrushev.

The reason to plant that story is likely the same one as above – to calm down allies who are getting nervous about an endless war.

It is obvious that the U.S. does not want the war to end anytime soon:

The U.S. is sending Ukraine $400 million more in military aid and establishing a security assistance headquarters in Germany that will oversee all weapons transfers and military training for Ukraine, the Pentagon announced Friday.

The new command post that will oversee this aid will be led by a three-star-level senior officer and have about 300 personnel based in Germany who will monitor the weapons assistance and training programs, said U.S. Army Europe spokesman Col. Martin O’Donnell.

Such a command points to an effort over multiple years. Likewise some of the weapon systems the U.S. has promised to Ukraine have not yet been produced. They will reach Ukraine only 2023 or 2024 – if ever.

But I doubt that this plan for a years long war can work. Russia’s recent attack on the electricity systems of Ukraine has shown that it has the escalation dominance, that it could do much more to destroy Ukraine and to make it incapable of further pursuing the war.

The U.S. is also pushing Ukraine to attack the Russian positions on the right bank of the Dnieper river:

Ukrainian forces can retake the strategic southern city of Kherson from Russian troops, US Defense Secretary Lloyd Austin said on Thursday, in what would be a major defeat for Russia in its invasion of its neighbor.

Austin’s remarks coincided with a Russian-installed official in Kherson region saying Moscow was likely to pull its troops from the west bank of the Dnipro River, signaling a significant retreat, if confirmed.
…
“On the issue of whether the Ukrainians can take the remaining territory on the west side of the Dnipro river and in Kherson, I certainly believe that they have the capability to do that,” Austin told a news conference at the Pentagon.

“Most importantly, the Ukrainians believe they have the capability to do that. We have seen them engage in a very methodical but effective effort to take back their sovereign territory.”

There are also rumors from Ukraine that Sullivan has pressed Zelensky to launch a Kherson campaign as soon as possible. Zelensky is said to have agreed to do so.

But the Ukrainian army does not want to do that – at least not now. The Russian troops in the area have been reinforced. The fields are muddy and can not be crossed by heavy vehicles. Russian artillery attacks destroy equipment pre-positioned for the attack before it is ready to come near the front line.

The Ukrainian military has for weeks tried probing attacks in the Kherson region. These had no significant results while the attacking units had high losses. The units deployed around the region have been there since early October or longer. The Military Land deployment map shows only one unit that arrived just five days ago. The 98th Azov battalion, one of the fascist volunteer forces, has been positioned in the back of 128th Mountain Assault Brigade which, in recent weeks, has had some of the most serious losses. 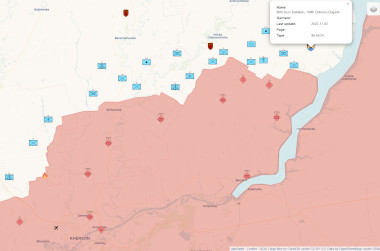 The use of such ‘nationalist’ forces to prevent the retreat of exhausted front line units has been a regular occurrence in this war.

Ukraine has for weeks had no success on the battle field. Washington wants it to show such a success so that it can tell its allies that the war can be won by the Ukrainian side. The push for an attack on Kherson is again part of the overall campaign to convince Europeans that they should sustain the efforts to arm and support Ukraine.

2 thoughts on “Ukraine – U.S. Deceives Allies To Keep Them In Line”