On February 24, the day Russian troops crossed the borders to Ukraine, I wrote about the potential end state of the operation: 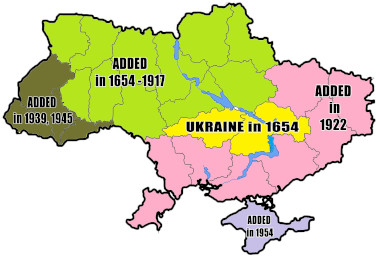 This would eliminate Ukrainian access to the Black Sea and create a land bridge towards the Moldavian breakaway Transnistria which is under Russian protection.

The rest of the Ukraine would be a land confined, mostly agricultural state, disarmed and too poor to be build up to a new threat to Russia anytime soon. Politically it would be dominated by fascists from Galicia which would then become a major problem for the European Union.

On March 19 I revisited the question and added Kryvyi Rih (Kriwoi Rog in Russian), the yellow part of the map, to the list:

Novorossiya roughly includes the red and yellow areas in the above map. It also includes the valuable Soviet developed iron ore mines and factories of Kryvyi Rih west of the Dnieper river.

I especially want to point out that I spoke of a “mostly agricultural state, disarmed and too poor to be build up to a new threat to Russia anytime soon.”

I could say that because nearly all of Ukraine’s resources and industries are in the south and east. If Russia takes those or creates the new state of Novorossiya the ‘rest of Ukraine’ will be mostly de-industrialized. Also of note is that the south and east include most of the famous black soil areas, which consists of a half meter deep humus layer that allows for good agricultural results without using much fertilizers.

Much of the steel and heavy machine industries in the south and east have been neglected over the last 30 years under Ukrainian rule or were destroyed during the wars that are raging since 2014. It will require very large investments to revive them but the potential profits will be great.

Nearly half a year after I wrote about it, the Washington Post, with the help of some Canadians, is catching up on the issue:

In the Ukraine war, a battle for the nation’s mineral and energy wealth

After nearly six months of fighting, Moscow’s sloppy war has yielded at least one big reward: expanded control over some of the most mineral-rich lands in Europe. Ukraine harbors some of the world’s largest reserves of titanium and iron ore, fields of untapped lithium, as well as massive deposits of coal. Collectively, they are worth tens of trillions of dollars.

The lion’s share of those coal deposits, which for decades have powered Ukraine’s critical steel industry, are concentrated in the east, where Moscow has made the most inroads. That’s put them in Russian hands, along with significant amounts of other valuable energy and mineral deposits used for everything from aircraft parts to smartphones, according to an analysis for The Washington Post by the Canadian geopolitical risk firm SecDev.
…
“The worst scenario is that Ukraine loses land, no longer has a strong commodity economy and becomes more like one of the Baltic states, a nation unable to sustain its industrial economy,” said Stanislav Zinchenko chief executive of GMK, a Kyiv-based economic think tank. “This is what Russia wants. To weaken us.”
…
Yet SecDev’s analysis indicates that at least $12.4 trillion worth of Ukraine’s energy deposits, metals and minerals are now under Russian control. That figure accounts for nearly half the dollar value of the 2,209 deposits reviewed by the company. In addition to 63 percent of the country’s coal deposits, Moscow has seized 11 percent of its oil deposits, 20 percent of its natural gas deposits, 42 percent of its metals and 33 percent of its deposits of rare earth and other critical minerals including lithium.

I believe that the natural gas share Russia already holds is higher as there are several sub-sea gas fields around Crimea and off the eastern coast.

If the Russian forces also take Kryvyi Rih and Dnipro they will have about 75-80% of Ukraine’s pre-war GDP under their control.

Russia’s war effort is currently financed by the ‘west’ which pays for it through record energy prices created by its own sanctions on Russia.

The positive balance of the current account of the balance of payments of the Russian Federation in January-July 2022 amounted to $166.6 billion,

($50.1 billion). Such information is contained in the assessment of the balance of payments of the Russian Federation, published on the website of the Bank of Russia.

According to the base scenario of the Central Bank’s forecast for 2022, updated in July, with an average annual oil price of $80 per barrel, the current account surplus is expected to be $243 billion, the positive balance of foreign trade in goods and services – $277 billion, and the negative balance of primary and secondary income – $33 billion.

If the ‘west’ really wants to deprive Russia of money it must immediately lift the sanctions and restart importing oil, gas and coal from Russia at then much lower prices.

Russia will not lack money to finance the rebuilding of Novorossiya’s great industries. Once that is done those areas are evidently able to support themselves and to guarantee a high standard of living. They will also have enough money to militarily defend themselves against anything the poor rest of Ukraine will be able to finance.

At the end of March, after negotiations between Russia and Ukraine in Turkey, there was nearly an agreement on a ceasefire and on the end of the war. Joe Biden then tasked Boris Johnson with telling Zelensky to continue the war. The ‘west’ would otherwise stop paying him. Zelensky did as he was told and stopped all negotiations with Russia.

An agreement with Russia at that time would have kept the Ukraine mostly as one state with only minor losses in the Donbas. But the decision to continue the hopeless war also ended all chances for Ukraine to keep its riches.

It will be poor and helpless while its ‘western’ neighbors will feast on it.

One thought on “How Ukraine Lost Its Riches”