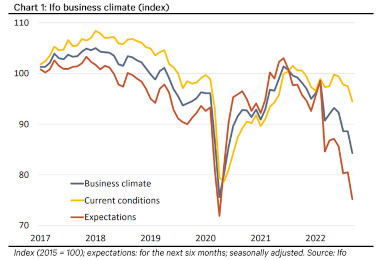 On February 7 Professor of Economics Michael Hudson explained why America’s Real Adversaries Are Its European and Other Allies:

What worries American diplomats is that Germany, other NATO nations and countries along the Belt and Road route understand the gains that can be made by opening up peaceful trade and investment. If there is no Russian or Chinese plan to invade or bomb them, what is the need for NATO? And if there is no inherently adversarial relationship, why do foreign countries need to sacrifice their own trade and financial interests by relying exclusively on U.S. exporters and investors?

These are the concerns that have prompted French President Macron to call forth the ghost of Charles de Gaulle and urge Europe to turn away from what he calls NATO’s “brain-dead” Cold War and beak with the pro-U.S. trade arrangements that are imposing rising costs on Europe while denying it potential gains from trade with Eurasia. Even Germany is balking at demands that it freeze by this coming March by going without Russian gas.

Instead of a real military threat from Russia and China, the problem for American strategists is the absence of such a threat.

What the U.S. needed was to provoke Russia, and later China, into reacting to U.S. arranged threats in a way that would oblige its ‘allies’ to follow its sanction policies.

The rather dimwitted European leadership fell for the trick.

The U.S. arranged for a Ukrainian attack on the rebel held Donbas region. This started on February 17 with intense artillery preparations against Donbas positions as recorded by the OSCE observers at that border. Russia had to react or see the ethnic Russians in those areas getting maimed and killed by Nazi devoting Ukrainians.

There was no way to prevent that but by other than military means. On February 22 Russia recognized the Donbas republics as independent states and signed defense agreements with them.

The same day the German chancellor Olaf Scholz canceled the launch of the undersea Nord Stream II pipeline which was to transport Russian gas to Germany’s industries and consumers.

The Europeans launched a sequence of extremely harsh economic sanctions against Russia which, prodded by the U.S., had been prepared months in advance.

Russia’s Special Military Operation, under Article 51 of the UN Charter, commenced on February 24.

A follow-up piece by Michael Hudson on February 28 stated that Germany had been defeated for a third time in a century:

The active military force since 1991 has been the United States. Rejecting mutual disarmament of the Warsaw Pact countries and NATO, there was no “peace dividend.” Instead, the U.S. policy by the Clinton administration to wage a new military expansion via NATO has paid a 30-year dividend in the form of shifting the foreign policy of Western Europe and other American allies out of their domestic political sphere into their own “national security” blob (the word for special
rentier interests that must not be named). NATO has become Europe’s foreign-policy-making body, even to the point of dominating domestic economic interests.

The recent prodding of Russia by expanding Ukrainian anti-Russian ethnic violence by Ukraine’s neo-Nazi post-2014 Maiden regime aims at forcing a showdown. It comes in response to the fear by U.S. interests that they are losing their economic and political hold on their NATO allies and other Dollar Area satellites as these countries have seen their major opportunities for gain to lie in increasing trade and investment with China and Russia.
…
As President Biden explained, the current military escalation (“Prodding the Bear”) is not really about Ukraine. Biden promised at the outset that no U.S. troops would be involved. But he has been demanding for over a year that Germany prevent the Nord Stream 2 pipeline from supplying its industry and housing with low-priced gas and turn to the much higher-priced U.S. suppliers.
…
So the most pressing U.S. strategic aim of NATO confrontation with Russia is soaring oil and gas prices. In addition to creating profits and stock-market gains for U.S. companies, higher energy prices will take much of the steam out of the German economy.

(Some people currently peddle a ‘Secret RAND study from January 2022’. It is obviously faked. It is simply a write up of Hudson’s analysis.)

Nord Stream II was created to make Germany independent from pipelines running through Poland and the Ukraine. Blocking it was the most stupid thing for Germany to do and thus chancellor Scholz did it.

In the following months Poland blocked the Jamal pipeline which also brought Russian gas to Germany. Ukraine followed up with cutting off two Russian pipelines. The main compressor stations of the Nord Stream I pipeline, which the German company Siemens had build and has the maintenance contract, failed one after the other. Sanction are prohibiting Siemens from repairing them.

It is not Russia that has blocked its gas and oil from European markets. It were the German, Polish and Ukrainian governments that did it.

Russia would in fact be happy to sell more. Putin has recently again offered to push as much Russian gas as possible through Nord Stream II to Germany:

After all, if they need it urgently, if things are so bad, just go ahead and lift sanctions against Nord Stream 2, with its 55 billion cubic metres per year – all they have to do is press the button and they will get it going. But they chose to shut it off themselves; they cannot repair one pipeline and imposed sanctions against the new Nord Stream 2 and will not open it. Are we to blame for this?

It is the German government that is to blame for rejecting that offer.

The economic war against Russia that the sanctions against were meant to win has failed to move Russia. The Rubel is stronger than ever. Russia is making record profits even while selling fewer gas and oil than before the war. Russia may have a small recession this year but its standard of living is not in decline.

As was easy predictable and, as Michael Hudson explained, the economic consequences of the anti-Russian sanctions within Europe have in contrast huge catastrophic consequences for the Europe’s industries, its societies and its political standing in the world.

Governments and the media had so far refrained from noting the gigantic problems that are coming up and which industry leaders had pointed out early on. Only over the last two weeks or so have they picked up the urgent warnings.

Der Spiegel, Germany’s major weekly, asks: How Bad Will the German Recession Be? and states the obvious:

The first German companies have begun throwing in the towel and consumption is collapsing in response to the fallout from exploding energy prices.

The economy is sliding almost uncontrolled into a crisis that could permanently weaken the country.

The piece discusses the five stages along which the catastrophe will happen.

Act One: Freezing Production – It is becoming prohibitively expensive to produce in Germany.

Act Two: The Price Trap – No one buys at the high prices German products now cost.

Act Four: The Wave of Bankruptcies.

Act Five: The Final Act on the Labor Market.

When Germany will have some 6 to 10 million unemployed people, and the government less tax income as only a few companies will be profitable, the social system will break down.

Volkswagen, Europe’s biggest carmaker, warned last week that it could reallocate production out of Germany and eastern Europe if energy prices don’t come down.

Europe is paying seven times as much for gas as the US, underscoring a dramatic erosion of the continent’s industrial competitiveness that threatens to cause lasting damage to its economy. With Russian President Vladimir Putin redoubling his war efforts in Ukraine, there’s little sign that gas flows – and substantially lower prices – would be restored to Europe in the near term.

OilPrice.com provides that Europe Faces An Exodus Of Energy-Intensive Industries.

In fact The EU is sleepwalking into anarchy:

All eyes may be on the Italian election results this morning, but Europe’s got much bigger problems on its hands than the prospect of a Right-wing government. Winter is coming, and the catastrophic consequences of Europe’s self-imposed energy crisis are already being felt across the continent.

As politicians continue to devise unrealistic plans for energy rationing, the reality is that soaring energy prices and falling demand have already caused dozens of plants across a diverse range of energy-intensive industries — glass, steel, aluminium, zinc, fertilisers, chemicals — to cut back production or shut down, causing thousands of workers to be laid off. Even the pro-war New York Times was recently forced to acknowledge the “crippling” impact that Brussels’s sanctions are having on industry and  theworking class in Europe. “High energy prices are lashing European industry, forcing factories to cut production quickly and put tens of thousands of employees on furlough,” it reported.

It’s truly a sign of the feebleness of Europe’s politicians that despite the fast-approaching cliff, no one can bring themselves to state the obvious: that the sanctions need to end.

There’s simply no moral justification for destroying the livelihoods of millions of Europeans simply to school Putin, even if the sanctions were helping to achieve that aim, which they clearly aren’t.

The U.S., while also going into a recession, will profit, as it had planned, from the European catastrophe.

The Handelsblatt, a business daily, reports that Germany companies are moving production to North America.

The German government is claiming it wants to prevent that but that is impossible without ending the energy sanctions.

The New York Times is of course happy with the situation. As European producers get out-priced from their markets the U.S. is taking up their slack:

Factory Jobs Are Booming Like It’s the 1970s
U.S. manufacturing is experiencing a rebound, with companies adding workers amid high consumer demand for products..

The U.S., with the help of European politicians, is waging a war against the people of Europe and their standard of living. It is now on the verge of winning that war.

No help will come from outside to prevent that from happening:

Europe, and especially Germany, can only escape this obvious trap if it opens the pipelines from Russia. It now high time to do that.

One thought on “The U.S. Is Winning Its War On Europe’s Industries And People”