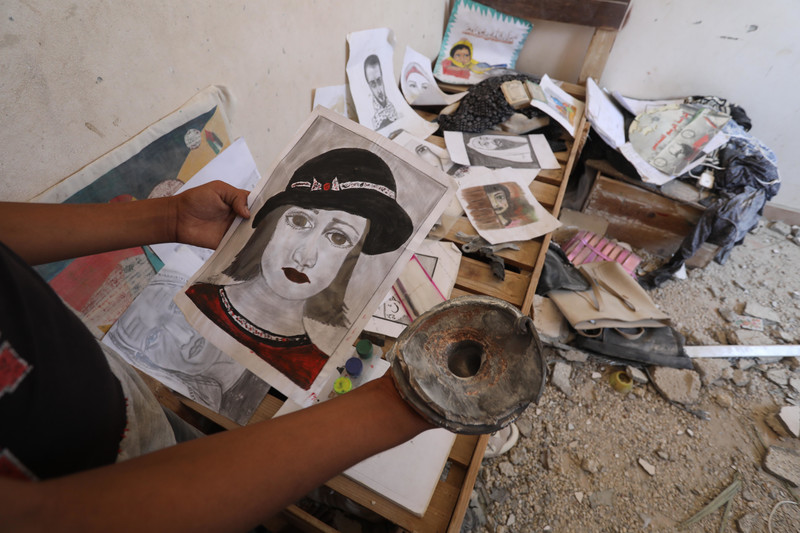 Some of Duniana al-Amour’s paintings and sketches in the bedroom where she was attacked by Israel’s military. Ashraf Amra APA images

Duniana al-Amour was sustained by her art.

Born in 2000, Duniana encountered a huge amount of aggression in her all-too-short life.

For most of her 22 years, Gaza was under a complete blockade, leading many observers to call it the world’s largest open-air prison. Every so often the open-air prison gets subjected to Israeli military attacks, causing immense destruction – both physical and psychological.

Duniana captured both the beauty and grief which surrounded her with pencils and paint.

Alternating between vivid colors and black and white, she depicted wild flowers, birds and trees, occasionally writing a poetic observation beside an image.

She portrayed family members, too. Among them were her aunt Zina, killed by Israel’s forces while she was working on farmland in 2016.

Duniana’s talent brought joy to many. Children huddled around Duniana at parties and other social events, waiting to have their faces painted.

“When she was happy, she drew,” said her brother Assim. “And when she was sad, she drew.” 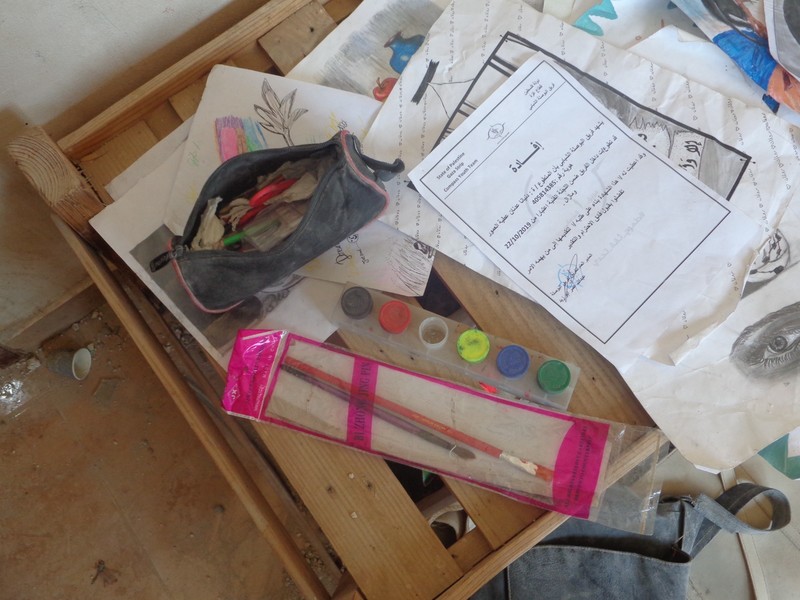 Paints and brushes used by Duniana al-Amour. Hanin A. Elholy

Duniana lived with her family in al-Fukhari, a neighborhood of Khan Younis city. Their home was approximately a kilometer away from Gaza’s boundary with Israel.

Her living conditions were extremely basic. The family’s home has no refrigerator or washing machine.

They do, however, have a garden, which Duniana maintained carefully, and make a small income from working on the surrounding farmland.

About 3:30 p.m. on 5 August, Duniana joined some of her family in the front garden.

“We talked, laughed and drank tea,” her father Adnan said.

The relaxed atmosphere did not last long.

After a short while, Duniana went inside to her room and read the Quran.

Her sister-in-law Simone knocked on the door and asked if she could join Duniana to pray. But Duniana indicated that she would prefer to be left alone.

“It was almost as if she knew that she was going to be killed,” Simone said. “It was almost like she sacrificed herself to save us.”

That afternoon, Israel launched a major offensive on Gaza.

According to Israeli state propaganda, the offensive targeted Islamic Jihad, an armed resistance group. As always with such offensives, many of the victims were civilians.

Duniana was one of them.

Shortly after 4 p.m., the Israeli military shelled her home. Duniana was struck by shrapnel in various parts of her body. 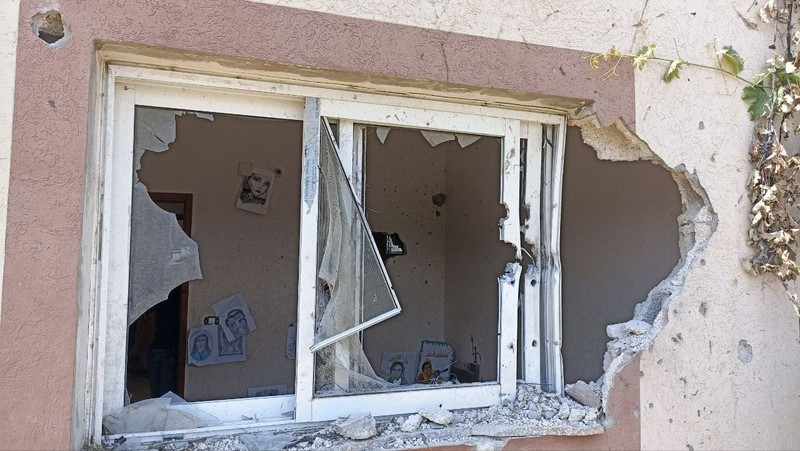 The al-Amour home after it was shelled by Israel. Hanin A. Elholy

Some other members of the family were in the house and managed to escape with light injuries.

Adnan, Duniana’s father, was outside the house at the time of the attack. He screamed that his daughter was still inside and began crawling towards the house.

The air was filled with smoke and dust and he could not see anything clearly.

Following the artillery strike, Israeli snipers based at the Gaza boundary fired numerous bullets in the direction of the house.

“I didn’t care about the bullets or the drone that was coming closer and closer to me,” said Adnan. “I just wanted to see my daughter alive.”

When Adnan succeeded in entering her room, he found Duniana on her bed.

Adnan and his son Assim carried her out of the house. She was bleeding profusely.

Adnan managed to get help from a local farmer. The farmer drove Duniana to the European Gaza Hospital in Khan Younis.

Duniana was taken to its intensive care unit, where she died.

Today, several of her paintings and sketches lie forlornly on a small wooden bed in her home. A few more have been affixed to a wall with gaping holes caused by Israeli shelling.

Visitors to the home are taken to see this informal exhibition. It serves as a reminder of both Duniana’s talent and the horrific crime committed against her by the Israeli state.

Other Gaza artists recently gathered beside her home to paint pictures in her memory.

Almost 50 Palestinians were killed, including 17 children. More than 360 were injured.

Duniana was active in al-Bousala, a cultural center set up in 2019.

“If I wanted something to be done fast and well, I would call on Duniana,” said Abdullah Abu Zaid, the center’s manager. “She spoke less than other people. But when she spoke, everything she said was eloquent and to the point.”

Hanin A. Elholy is a researcher, writer and translator based in occupied Palestine. Her sister Tasneem is a student.