There are some new bits about the Ryanair flight 4978 which on May 23 landed in Belarus after having received a bomb threat. To recap:

On May 23 a bomb threat against a Ryanair flight from Greece to Lithuania was emailed to airports and authorities in Lithuania, Belarus and Greece. It is not known who has sent the email. …

Belarus Air Traffic Control, through whose airspace the plane was flying at that time, contacted the pilot, informed him of the threat and recommended landing the plane in Minsk. The pilot contacted Ryanair management and then decided to follow the advice. The plane landed at 10:15 utc (13:15 Belorussian time), the passengers disembarked and a lengthy bomb search was carried out. No bomb was found.
…
The passengers had to pass through passport controls. Two passengers were found to have outstanding arrest warrants against them and were detained. The other passengers flew to their original destination.
…
[J]ust an hour after the plane had landed [regime change agent] Frank Viacorka, who is followed by many ‘blueticks’ on Twitter, presented a narrative of the incident which strongly diverted from reality but allowed for a new push of the stalled regime change agenda.
…
The widely shared tweet and the ones following it implied that the Belorussian government ordered the plane down to arrest the regime change agent Protasevich.

When one looks into the details of the case it soon becomes obvious that the narrative is false.

The false narrative continues to be told by ‘western’ media. It has led, as its originators hoped, to the introduction of new sanctions against Belarus.

The case came up again during a recent interview by NBC with the Russian President Vladimir. The transcript and video are available here:

Keir Simmons: Let’s move on to Belarus and Ukraine, two issues that will certainly come up in your summit with President Biden. Did you have prior knowledge that a commercial airliner would be forced to land in Belarus and that a journalist would be arrested?

Keir Simmons: You appear to have approved of it judging by your meeting with President Lukashenko soon afterwards.

Vladimir Putin: Not that I approve of it. Not that I condemn it. But, well, it happened. I said recently in one of the conversations with a European colleague, the version of Mr Lukashenko who told me about it was that information had been given to them that there was an explosive device on board the plane. They informed…

Keir Simmons: And you believe that?

Vladimir Putin: …the pilot without forcing the pilot to land. And the pilot made a decision to land in Minsk. That is all. Why should I not believe him? Ask the pilot. It’s the simplest thing. Ask the chief pilot. Ask the commander of the aircraft. Did you ask him if was he forced to land? Because I have not heard or seen an interview with the commander of the aircraft that landed in Minsk. Why not ask him? Why not ask him if he was forced to land? Why don’t you ask him? It’s actually even odd. Everybody accuses Lukashenko, but the pilot hasn’t been asked.
…
Vladimir Putin: Yes. Look, I will tell you one more time. What President Lukashenko told me, I don’t have any reason not to believe him. For the third time, I’m telling you: Ask the pilot. Why don’t you ask the pilot: Was he…

Keir Simmons: But you…

Vladimir Putin: …being scared? Was he being threatened? Was he being forced? The fact that information appeared that there was a bomb on the plane, that individuals, people who had nothing to do, who were passengers, who had nothing to do with politics or any kind of domestic conflicts, that they could perceive it negatively, could be worried about it, of course that’s a bad thing. There is nothing good about this. And obviously, we condemn everything that has to do with this, and international terrorism, and the use of aircraft. Of course, we are against this. …

Putin is right to point out that ‘western’ media have made no effort to really look into the case. They could reach out to the pilot and co-pilot and to Ryanair and ask what really had happened.

But Putin is wrong in suggesting that the pilots were not questioned at all. After the plane had finally landed in Vilnius the pilot was questioned by the Lithuanian police:

Those questioned include the captain of the aircraft who “made the decision [to change course to Minsk] after consulting Ryanair’s management”, according to [Rolandas Kiškis, head of the Criminal Police Bureau].

The undisputed transcript of the radio traffic between the pilot and Belorussian Air Traffic Control proves that there was no threat or order from the authorities to land the plane. The ATC recommended to divert to Minsk because of the bomb threat. The pilot communicated with his airline and then followed the ATC’s advice.

That the NBC interviewer of Putin is not aware of those facts disqualifies him as a journalist.

Two ‘western’ paid activists who had worked for regime change in Belarus had been on the Ryanair flight. Roman Protasevich and his girl friend Sofia Sapega had warrants outstanding against them. They were arrested after the plane had landed in Minsk. A Belorussian TV station made a documentary (video) of the bomb threat case. It shows that both left the plane like all other passengers and were only arrested when passing through the custom control. It also shows Protasevich’s first interview with the police. In another 90 minute interview (video) of Protasevich with a Belorussian TV journalist he is spilling the beansabout the ‘western’ financed opposition.

Yesterday the Foreign Ministry of Belarus gave a press conference on the issue. Protasevich was also there to answer question. His part is at 45:00 minutes into the video of the press conference. 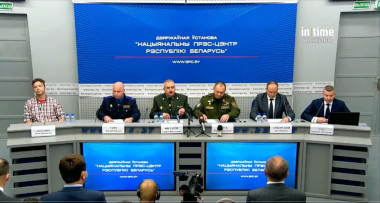 BBC journalists at the press conference left the room as they assumed that Protasevich’s appearance was not voluntary. Protasevich himself strongly disputes that. Like in the previous videos of him there is no sign in his attitude or engagement that would make me believe that he was coerced into doing this.

The press conference was intended to clear up several false claims found in ‘western’ media. One was this: 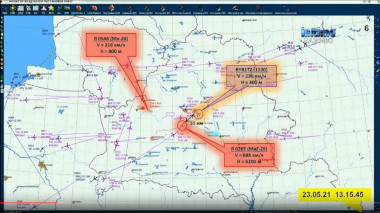 Then follows a part about a border tussle around illegal immigration between Belarus and Lithuania. After that the main investigator of the case discusses what crimes Protasevich and Sapega are accused of. He also says that Protonmail, the Swiss company through which the bomb threat email had been sent, has not cooperated with the Belorussian authorities in this and previous cases.

Then follow questions to Protasevich himself. The first question is about a claim in an opposition channel on Telegram that President Lukashenko had appeared in his prison and had personally beaten up Protasevich.

Protasevich calls that a joke. He explains the marks on his wrists that could be seen in his last interview. He says that when he got arrested the police at the airport did not have hand cuffs and used plastic cable binders instead. Those cut into his skin. 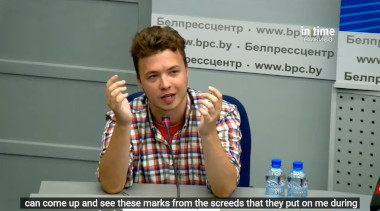 He says that he has not been hurt at all and that he is in full health. He asks his former comrades in the Belorussian opposition to not spread rumors about him. He is afraid that his parents, who are in Poland, are getting misled about his situation. When he is asked about the Russian oligarch who he had claimed financed part of the opposition he says that he can not remember the man’s name.

Thanks to Elena Evdokimova for translating the above details.

In its report about Protasevich’s appearance at the press conference the New York Times makes several false claims. It says that Protasevich “was dragged off a Ryanair flight along with his girlfriend, Sofia Sapega, three weeks ago by Belarusian security agents.”

The documentary about the flight shows at 20:20 min and at 25:45 min that this was not the case. No police came on board. The passengers, including Protasevich and Sapega, left the plane one by one with their carry-on luggage. Bomb sniffing dogs then check the luggage and the passengers enter a bus to be drive to the terminal. 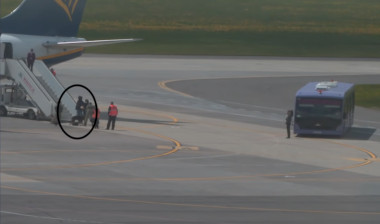 At 26:53 min the documentary shows Protasevich with a black mask and a military backpack in the terminal waiting for passing the passport control. 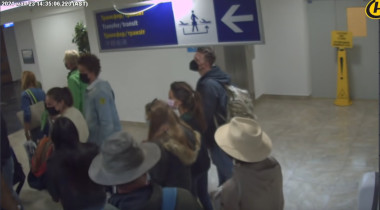 Belarusian authorities had promised to provide new details in their story of how and why the Ryanair flight was forced to land after entering the country’s air space on a flight to Lithuania from Greece.

The Ryanair flight was not “forced to land” and a no point have Belorussian authorities offered to provide details about such an event. They did provided details about a plane that was under a bomb threat and which diverted to Minsk after the pilot had voluntarily decided to do so.

The BBC report of the press conference is likewise filled with untruth and propaganda:

Flatly contradicting independent accounts of what happened, Belarus air force chief Igor Golub told the briefing: “There was no interception, no forced diversion from the state border or forced landing of the Ryanair plane.”

What please are “independent accounts of what happened” aside from some fact free tweets from regime change agents like Frank Viacorka which are completely contradicted by well documented evidence and facts?

Moon of Alabama could not exist without financial support from its readers. Please help to keep this site alive.

—
Previous Moon of Alabama post on the Ryanair incident in Belarus: