Yesterday saw minor protests in Cuba driven by U.S. regime change dollars and by economic problem caused by U.S. sanctions. They were accompanied by a number of newly created accounts on various social media which posted the same slogans over and over again under the #SOSCuba hashtag.

I consider the whole thing to have been a trial run for some bigger plans. But the operators behind this must feel disappointed. The turnout on the anti-government side was lousy.

I doubt that ‘thousands’ number as pictures and videos, aside from the usual fakes, only showed small demonstrations of dozens to maybe a hundred.

The Guardian piece includes this picture which seems to show quite a number of people. 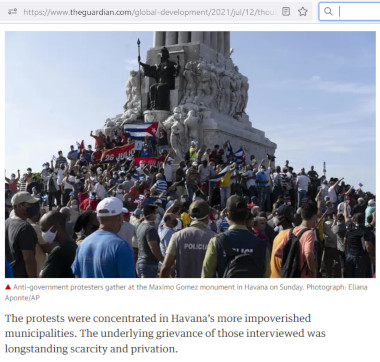 Inaugurated in the mid-1930s, this magnificent monument pays homage to Dominican-born General Máximo Gómez, who became Commander in Chief of Cuba’s Liberation Army during the Wars of Independence. 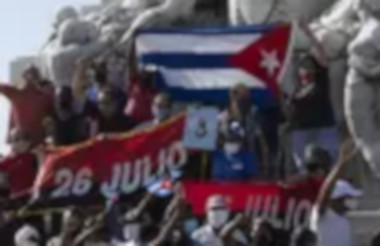 And what are these flags of the 26 of July movement doing with ‘anti-government’ protesters?

The 26th of July Movement (Spanish: Movimiento 26 de Julio; M-26-7) was a Cuban vanguard revolutionary organization and later a political party led by Fidel Castro. The movement’s name commemorates its 26 July 1953 attack on the army barracks on Santiago de Cuba in an attempt to start the overthrowing of the dictator Fulgencio Batista.

This is considered one of the most important organizations among the Cuban Revolution.

The dude responsible for the nonsense is quite open about it.

We stand with the Cuban people as they bravely assert their fundamental and universal rights, and as they all call for freedom and relief from the tragic grip of the pandemic and from the decades of repression and economic suffering.

Decades of economic suffering in Cuba could be easily ended by the dude above as they are largely caused by 60 years of U.S. sanctions.

This cartoon fits the situation. 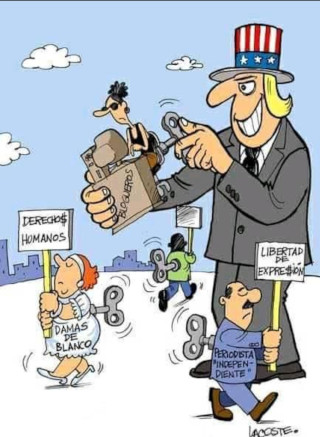