Under the title ‘Fallujah’s childrens’ ‘genetic damage‘ that old war horse ‘literally’ of the BBC’s foreign propaganda service, John Simpson, manages not to mention the phrase ‘depleted uranium’ when allegedly reporting on the alarming rise in birth defects that include cancer, leukaemia and a horrific rise in child mortality since the US demolished the city of Fallujah in 2004. And it’s not until right at the end of the piece that the US attack on Fallujah is even mentioned, let alone depleted uranium!

“Even if it’s possible to produce watertight scientific proof that American weapons were responsible for the genetic damage it will be almost impossible for the people who suffered to get any redress. American legislation makes it extremely difficult to sue the US government over acts of war.”

Well that takes care of that little problem then, doesn’t it. I trust the US government will reward Simpson for his slavish support of its wars of conquest and destruction.

Indeed, just look at the title of the video, the phrase genetic damage is in single quotes, thus the damage to the children of Fallujah, which is clearly and obviously genetic in origin, is questioned by the BBC’s spin meister Simpson. Worse, the video shows doctors comparing the effects of depleted uranium on the children of Fallujah with that of Hiroshima and Nagasaki, and point out that in fact, they’re much worse than the damage inflicted by the Empire’s atomic bombs.

Dan Hind, in his latest piece describes the BBC’s role as follows:

“[The BBC’s] journalistic failings derive from its nature as a creature of parliamentary opinion. If the executive and most of Parliament are uninterested in seeing an issue debated then the BBC remains silent. Given the centrality of the BBC in our information system its dependence on cues from an out of control political class lends mainstream coverage of public affairs an increasingly hallucinatory quality. When Westminster wants something – from a war in the Middle East to the privatization of the NHS – the BBC falls into line.” – ‘What If They Held A Constitutional Convention and Everybody Came?‘ By Dan Hind

I wanted to put the BBC video up here, but inconveniently, The BBC decided that us punters who pay for the BBC, are denied that right, so you’ll have to watch it here, but hurry up, who knows how long the BBC will allow us to view it? This in spite of the fact that it states on its website:

“BBC News makes some video content available for embedding on other websites and blogs. These videos can be embedded onto both personal and business websites, subject to our revised terms of use.“

Clearly this video is one that the BBC doesn’t want distributed too widely in spite of its disingenuous and downright misleading message (or perhaps because of it?). 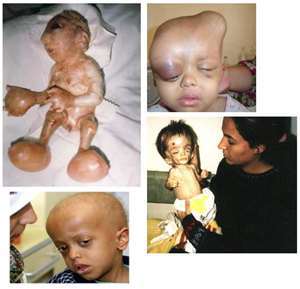 And even after a specialist talks about “genetic damage” in Fallujah, Simpson tells us:

“Yet the way the survey was done, asking people to fill in forms, means that it still isn’t finally conclusive.”

I’m not sure what Simpson wants here (aside from “watertight scientific proof”), if the survey of 4800 people, conducted by the International Journal of Environmental Research and Public Health doesn’t fit the bill, then what does?

But to add insult to injury, Simpson ends the report by blaming the Iraqi government!

“But even the Iraqi government doesn’t seem interested in finding out the truth, perhaps because Fallujah is a predominately Sunni Muslim town and the government is overwhelmingly Shiite Muslim.”

So Simpson manages to make the alleged Sunni/Shiite divide as the reason why we can’t get at the truth of the situation in Fallujah! Once more, the victims get blamed.

This is outrageous stuff, truly Goebellian propaganda of the worst kind. Hopefully, if there’s any justice in this world, one day Simpson will be called to account for his crimes of misreporting.

3 thoughts on “Depleted Uranium: The BBC’s John Simpson does a hatchet job on Fallujah’s genetically damaged children By William Bowles”