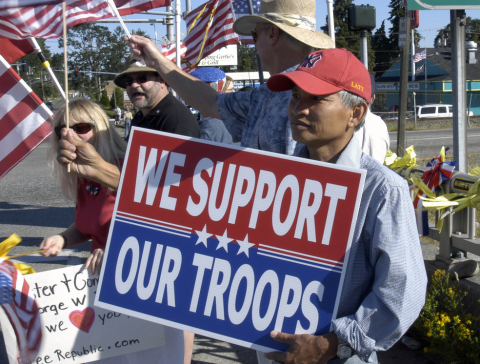 In the period leading up to the US invasion of Iraq in 2003, the Bush administration and its media accomplices waged a relentless propaganda campaign to win political support for what turned out to be one of the most disastrous foreign policy mistakes in American history.

Nearly two decades later, with perhaps a million dead Iraqis and thousands of dead American soldiers, we are still paying for that mistake.

Vice President Dick Cheney, Attorney General John Ashcroft, Assistant Attorney General John Yoo, and Defense Secretary Donald Rumsfeld, were key players behind the propaganda—which we can define as purposeful use of information and misinformation to manipulate public opinion in favor of state action. Iraq and its president Saddam Hussein were the ostensible focus, but their greater goal was to make the case for a broader and open-ended “War on Terror.”

So they created a narrative using a mélange of half-truths, faintly plausible fabrications, and outright lies:

But the propaganda “worked” in the most meaningful sense: Congress voted nearly 3–1 in favor of military action against Iraq, and Gallup showed 72 percent of Americans supporting the invasion as it commenced in 2003. Media outlets across the spectrum such as the Washington Post cheered the war. National Review dutifully did its part, labeling Pat Buchanan, Ron Paul, Justin Raimondo, Lew Rockwell, and other outspoken opponents of the invasion as “unpatriotic conservatives.”

Tragically, the American people never placed the burden of proof squarely with the war cheerleaders to justify their absolutely crazed effort to remake the Middle East. In hindsight, this is obvious, but at the time propaganda did its job. Disinformation is part and parcel of the fog of war.

What will hindsight make clear about our reaction to COVID-19 propaganda? Will we regret shutting down the economy as much as we ought to regret invading Iraq?

The cast of characters is different, of course: Trump, desperately seeking “wartime president” status; Dr. Anthony Fauci; epidemiologist Neil Ferguson; state governors such as Cuomo, Whitmer, and Newsom; and a host of media acolytes just itching to force a new normal down our throats. Like the Iraq War architects, they use COVID-19 as justification to advance a preexisting agenda, namely, greater state control over our lives and our economy. Yet because too many Americans remain stubbornly attached to the old normal, a propaganda campaign is required.

So we are faced with a blizzard of new “facts” almost every day, most of which turn out to be only mildly true, extremely dubious, or plainly false:

Again, much of this is not true and not even intended to be true—but rather to influence public behavior and opinions. And again, the overwhelming burden of proof should lie squarely with those advocating a lockdown of society, who would risk a modern Great Depression in response to a simple virus.

How much damage will the lockdown cause? Economics aside, the sheer toll of this self-inflicted wound will be a matter for historians to document. That toll includes all the things Americans would have done without the shutdown in their personal and professional lives, representing a diminution of life itself. Can that be measured, or distilled into numerical terms? Probably not, but this group of researchers and academics argues that we have already suffered more than one million “lost years of life” due to the ravages of unemployment, missed healthcare, and general malaise.

By the same token, how do we measure the blood and treasure lost in Iraq? How much PTSD will soldiers suffer? How many billions of dollars in future VA medical care will be required? How many children will grow up without fathers? And how many millions of lives are forever shattered in that cobbled-together political artifice in the Middle East?

Propaganda kills, but it also works. Politicians of all stripes will benefit from the coronavirus; the American people will suffer. Perversely, one of the worst COVID propagandists—the aforementioned  Governor Andrew Cuomo of New York—yesterday rang the bell as the New York Stock Exchange reopened to floor trading. He now admits that the models were wrong and that his lockdown did nothing to prevent the Empire State from suffering the highest per capita deaths from COVID. Like the architects of the Iraq War, he belongs on a criminal docket. But thanks to propaganda, he is hailed as presidential.

Jeff Deist is president of the Mises Institute. He previously worked as chief of staff to Congressman Ron Paul, and as an attorney for private equity clients. Contact: email; twitter.