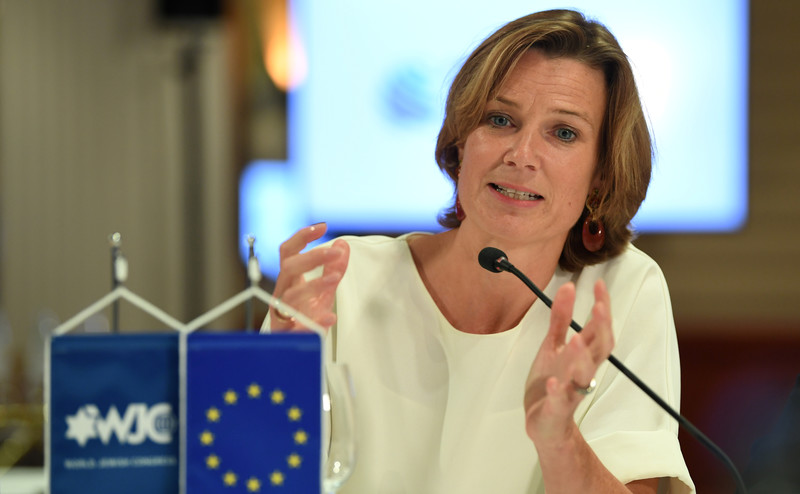 A prominent European Union official is once again spreading lies about the boycott, divestment and sanctions movement for Palestinian rights.

But the proposals from the European Union of Jewish Students and its German member JSUD, actually call for official condemnation of the BDS movement based on libels and fabrications.

The document asserts that “BDS is an anti-Semitic movement targeting Jewish life in Europe.”

It claims that “BDS leaders and supporters repeatedly seek to hold Jews collectively accountable for the actions of an Israeli government.”

The movement calls for no such thing.

“It is hardly shocking that Katharina von Schnurbein, an unelected EU bureaucrat who acts more like an advocate of Israel’s apartheid regime and a defender of its war crimes, is trading in anti-Palestinian racist fabrications and propaganda,” Omar Barghouti, a Palestinian human rights defender and co-founder of the BDS movement, told The Electronic Intifada.

“But with this latest outrageous lie against the nonviolent Palestinian-led boycott, divestment and sanctions movement, she has stooped even lower than before.”

Barghouti emphasized that the movement “stands categorically against all forms of racism, including anti-Semitism, as its anti-racist statement of principles explicitly states and as its 15-year record of progressive and intersectional human rights advocacy proves beyond doubt.”

“It believes that there is nothing Jewish about Israel’s ethnic cleansing, siege, military occupation and murderous apartheid policies against Palestinians, and that Israel does not speak for or represent all Jewish communities.”

By contrast, von Schnurbein appears to equate being Jewish with supporting Israel.

She does not share or welcome the proposals and ideas of Jewish organizations and prominent Jewish and Israeli figures who support Palestinian rights or criticize official efforts to equate Palestinian rights advocacy with anti-Semitism.

And her office recently rejected the application from European Jews for a Just Peace – a coalition of 12 groups in 10 countries – to join the EU’s working group on anti-Semitism.

The organization charges that the criteria for membership in the working group were suddenly rewritten in the midst of the application process deliberately to exclude organizations that do not toe the EU’s official pro-Israel line.

The EU administration “obviously refused us because it only wants the Jewish organizations that support Israeli policy in the working group,” European Jews for a Just Peace has said.

Yet von Schnurbein maintains a very cozy relationship with the Israel lobby and with Jewish communal organizations that are hostile to Palestinians.

Israel and its apologists have for years tried to portray the BDS movement as anti-Jewish, in an effort to incite goverment authorities to crack down on the movement as a purveyor of “hate speech.”

But that equation was rejected in a unanimous ruling by the European Court of Human Rights last month.

The landmark decision found that the criminal convictions of activists in France who called for a boycott of Israeli goods violated the guarantee of freedom of expression in the European Convention on Human Rights.

The European judges rejected the French courts’ reasoning that calling for a boycott of Israeli goods was tantamount to inciting hatred and discrimination.

The European Union of Jewish Students and JSUD, the groups behind the proposals welcomed by von Schnurbein, have a history of hostility towards Palestinians.

EUJS defines itself as a “Zionist organization,” while JSUD campaigns for German authorities to impose an outright ban on BDS to shield Israel from criticisms by human rights campaigners.

EUJS has called Israel’s massacres of Palestinians in the Gaza Strip “alleged abuses” and has claimed that “peace” will come when “the rulers of Gaza choose humanity over hate, when they stop firing on our children while hiding behind their own.”

This dehumanizing propaganda – a staple of Israeli hasbara – aims to absolve Israel of the killing of Palestinian children with the racist lie that Palestinian parents are willing to sacrifice their own children just to make Israel look bad.

Nor is it the first time von Schnurbein has spread smears and fabrications about defenders of Palestinian human rights.

Last year, for instance, she accused BDS campaigners of protesting the American singer Matisyahu just because he is Jewish. This was a lie.

Matisyahu was protested by activists because he had raised money for Israel’s military and supported Israel’s attack on a flotilla sailing toward Gaza that killed 10 activists – not because of his religion or ethnicity.

In the light of the watershed decision by the European Court of Human Rights “and given von Schnurbein’s consistently anti-democratic, repressive attempts to silence EU citizens advocating for Palestinian rights, her position has become untenable,” Omar Barghouti said.

“We call on the European Commission President Ursula von der Leyen to immediately fire her, appointing someone who carries out this important mandate with integrity, transparency and without abuse of power.”

Von Schnurbein has not responded to a request for comment.

One thought on “Outrageous! The EU spreads more lies about BDS”