An Open Letter to Robert Redfield, Director of the Center for Disease Control and Prevention 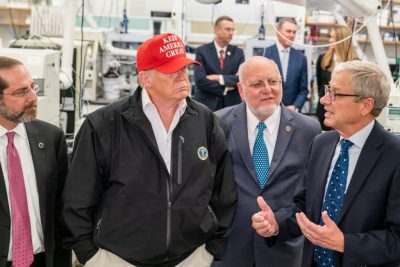 I made it a point to watch you after seeing Wisconsin’s Chief Medical Officer and Epidemiologist, Dr. Ryan Westergaard, state publicly on June 3, 2020

“Now the science is in. [Because of] recent studies with large numbers of patients in large numbers of countries…. we have hard evidence that risk of transmission goes down dramatically when people wear masks.”

I thought that he had to be wrong, because dozens of studies over decades had established that public masking does not impede viral transmission. The CDC, under your directorship, had even published a mere two months earlier, in May, 2020:

“In pooled analysis, we found no significant reduction in influenza transmission with the use of face masks”.

I emailed Dr. Westergaard for citations to back up his claim. He refused to answer me, but after multiple entreaties, and only more than a month later, he was willing to send my state representative a list of four publications that, as you would know, demonstrated nothing.

To check the CDC position, I went to your website (the August 7 update) and found your recommendation that people wear masks, along with a silly cartoon diagram of little spiked balls that indicate viruses bouncing off of a cloth surface. 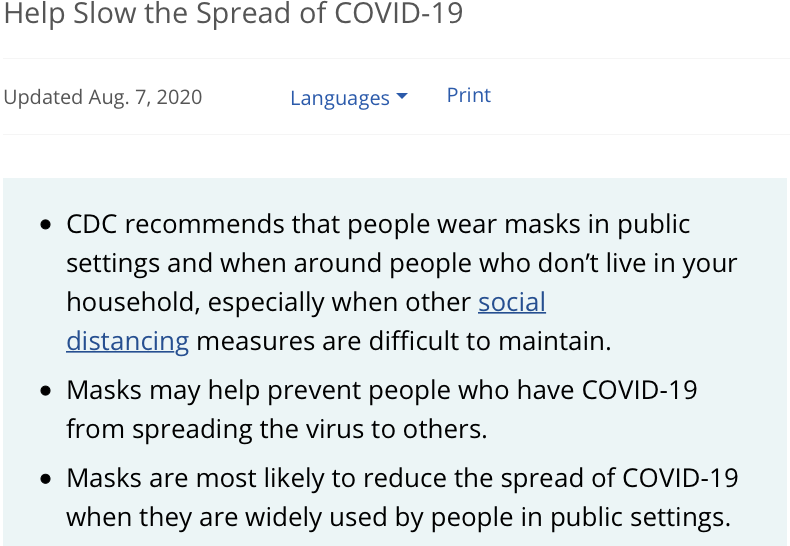 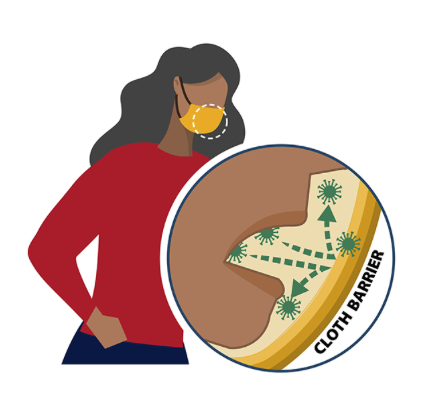 In nearby text, there is reference to “droplets” and a link to “emerging evidence” taking one to a bibliography of 19 entries presumably intended to justify the sudden position of the CDC to support public masking. Here, a snippet of a summation of my recently published article:

“It is difficult to explain to non-scientists what do, and what do not, qualify as bona fide scientific studies, but, just to make a point, the first listed in this CDC bibliography is a report based on a single asymptomatic infection

The other 18 consist primarily of reports of viral loads, the prevalence of asymptomatic patients, “presumed” transmission in a family of 5, rates of spread, fabric filtration efficiency, even laser light visualization of oral droplets (really).

Only 4 deal with masks per se, and not one comes close to making a case for the efficacy of public masking. One actually ends with the authors support of

‘…. surgical mask use as one of the recommended cough etiquette interventions’ [their term].

Etiquette? The list, a pathetically limp effort by the CDC to justify its indefensible authorization of public masking, does absolutely nothing to overturn years of studies that, in sum, show public masking to be ineffective in preventing transmission of viruses.”

Then, just two weeks ago, on September 16, 2020, I listened carefully to your testimony before the Senate Appropriations Subcommittee on Coronavirus Response when you said, beginning at 1:04:40,

“Face masks are the most important powerful public health tool we have ….. We have clear scientific evidence they work, and they are our best defense. I might even go so far as to say that this face mask is more guarantee to protect me against Covid than when I take a Covid vaccine, because the immunogenicity may be 70%, and if I don’t get an immune response, the vaccine’s not going to protect me. This mask will.” (emphasis added)

Your statement is that “clear scientific evidence” would necessarily involve randomized controlled trials.

Such bona fide scientific studies could not have been accomplished in the brief period between Spring, 2020, when it was understood within the scientific community that public masking is pointless, and July, when the CDC began telling people to mask up, using as justification a list of barely related anecdotal notes.

I consider these statements as politicized “expertise”.

The CDC under your leadership misrepresents the protective value of masks.

That, of course, points to a much larger political project at play.

Bill Willers is an emeritus professor of biology, University of Wisconsin at Oshkosh. He is founder of the Superior Wilderness Action Network (SWAN) and editor of Learning to Listen to the Land, and Unmanaged Landscapes, both from Island Press. He can be contacted at willers@uwosh.edu