Reuters reports that Facebook and Instagram are now allowing calls for the death of Russians and Russian leaders in exemption from the platforms’ hate speech terms of service due to the war in Ukraine:

“Meta Platforms will allow Facebook and Instagram users in some countries to call for violence against Russians and Russian soldiers in the context of the Ukraine invasion, according to internal emails seen by Reuters on Thursday, in a temporary change to its hate speech policy.”

Twitter has also altered its rules against incitement and death threats in the case of Russian leaders and military personnel, as Ben Norton explains here for Multipolarista.

Last month we also learned that Facebook is now allowing users to praise the Ukrainian neo-Nazi Azov Battalion because of the war, a move that is arguably the most liberal thing that has ever happened.

Western institutions everywhere are rejecting all things Russia with such a savage degree of xenophobia it really ought to shock anyone who was born after the 1800s. Everything from Russian athletes to Russian musicians to Russian-made films to Russian composers to Russian Netflix shows to lectures about Russian authors to Russian restaurants to Russian vodka to Russian-bred cats to Russian trees to dishes that sound a little too much like “Putin” have been cancelled to varying degrees around the western world.

Normally when the US and its allies are involved in a war they’ll at least pay lip service to the notion that they have nothing but good will for the people of the enemy nation, claiming they only oppose their oppressive rulers. With Russia it’s just a complete rejection of the entire culture, the entire ethnicity. It’s a widespread promotion of hatred for the actual people because of who they are.

These are the people who are being smashed with crushing economic sanctions while western pundits proclaim that “There are no more ‘innocent’ ‘neutral’ Russians anymore” and ask “At what point do you hold a people responsible for putting an evil despot in power?” This even as the Russian people are being arrested by the thousands in anti-war protests, putting to shame our own western society that has generally slept through war after war in the years since 9/11 while our militaries have been killing of millions of people. 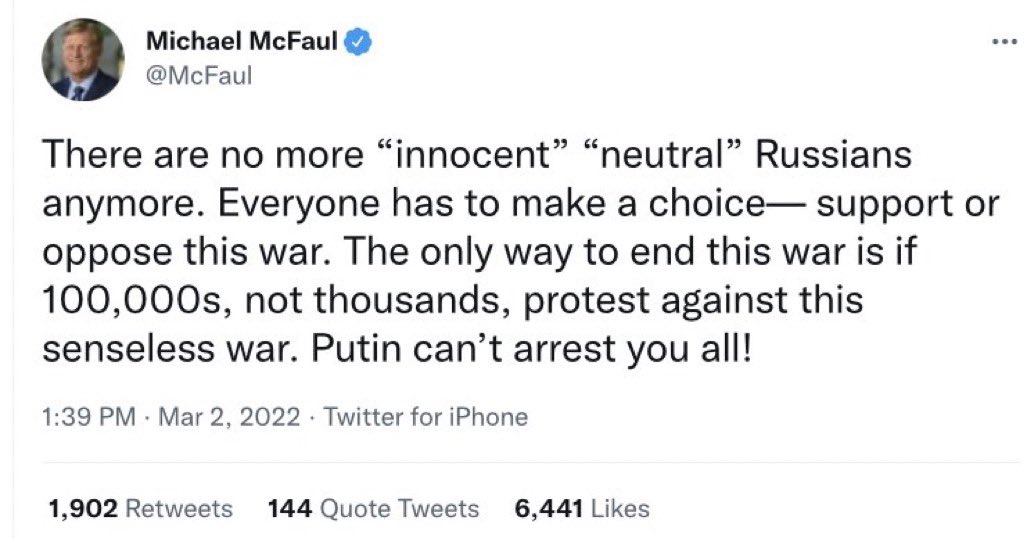 And this is all over a war that the western empire knowingly provoked, almost certainly planned in advance, and appears to be doing everything possible to ensure that it continues. Antiwar’s Dave DeCamp reports that Washington is still to this day not engaging in any serious diplomacy with Moscow over this conflict, preferring to strangle Russia economically and pour weapons into Ukraine to make the war as painful and costly as possible. Both of these preferences just so happen to nicely complement the US empire’s goal of unipolar planetary hegemony.

Meanwhile the entire western political/media class seems to be doing everything it can to turn this from a regional proxy war into a very fast and radioactive World War 3. Calls for a no-fly zone over Ukraine, which would require directly attacking the Russian military and risking a nuclear exchange in the resulting escalations, are now ubiquitous. Claims that more directly confrontational military aggressions against Russia won’t start a nuclear war (or that it’s worth the risk anyway) are becoming more and more common in western punditry. Democrats are braying for Russian blood while Republicans like Tom Cotton and Mitt Romney are attacking Democrats for being insufficiently hawkish and escalatory in this conflict, creating a horrifying dynamic where both parties are trying to out-hawk each other to score political points and nobody is calling for de-escalation and detente.

As luck would have it, US officials have also selected this precarious nuclear tightrope walk as the perfect time to begin hurling accusations that Russia is preparing a biological attack, potentially as a false flag blamed on Ukraine or the United States. This coincides with Victoria Nuland’s admission before the Senate Foreign Relations Committee that Ukraine has “biological research facilities” that the US is “quite concerned” might end up “falling into the hands of Russian forces”.

All of this on top of the unprecedented wave of authoritarian censorship that has been tearing through the US-centralized empire as our rulers work to quash dissident voices around the world. It certainly is interesting that the fight for freedom and democracy requires so much censorship, warmongering, xenophobia, propaganda and bloodlust.

It’s almost enough to make you wonder: are we the baddies?

I am of course only trying to make a point here. Geopolitical power struggles are not contested by opposing sides of heroes and baddies like a Marvel superhero movie, though you’d never know it from all the hero worship of Volodymyr Zelensky and the self-righteous posturing of mainstream westerners over this war. Vladimir Putin is no Peter Parker, but neither is Zelensky or Biden or any of the other empire managers overseeing this campaign to overwhelm all challengers to US global domination.

The power structure loosely centralized around the United States is without question the single most depraved and destructive on earth. No one else has spent the 21st century waging wars that have killed millions and displaced tens of millions. No one else is circling the planet with military bases and working to destroy any nation on earth which disobeys it. Not Russia. Not China. Nobody.

The hypocrisy, dishonesty and phoniness of this whole song and dance about Ukraine is one of the most distasteful things that I have ever witnessed. Rather than engaging in click-friendly Instagram activism with blue and yellow profile pics making risk-free criticisms of a foreign leader in a far off country who has nothing to do with us, perhaps we would be better served by a bit more introspection, and by a somewhat more difficult stance: intense scrutiny of the corruption and abuses running rampant in our own society.