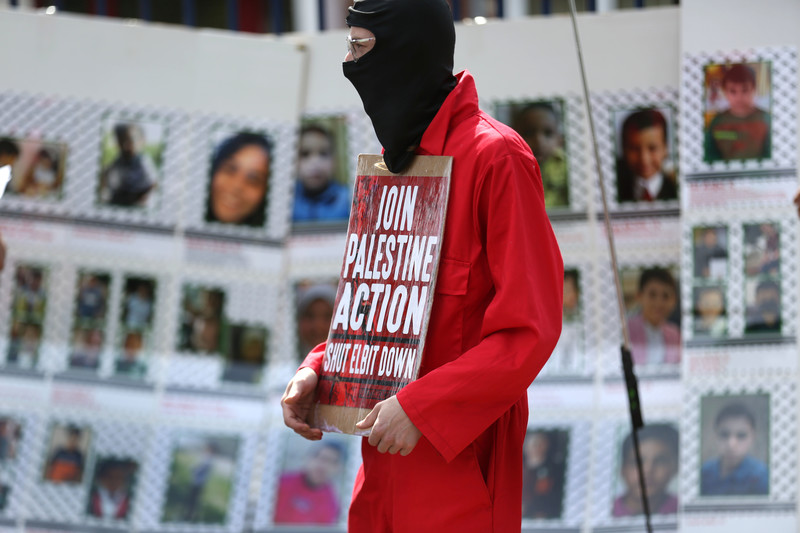 Palestine Action continues its protests in spite of an impending court case that could land several activists in prison for years. Martin Pope SOPA Images

In June, I wrote an analysis of Britain’s disturbingly draconian new Sections of that bill give every appearance of having been specifically drawn up in order to undermine Palestine Action.

Openly committed to damaging and destroying the British-based assets of top Israeli arms manufacturers, including Elbit Systems, Palestine Action has since launch in mid-2020 pulled off a string of successes, resulting in the closure of the company’s sites, and abandonment of offices by companies leasing space to Elbit.

Many Palestine Action activists have been arrested and prosecuted for breaking into and/or vandalizing Elbit sites and those of its suppliers in Britain, although to date just one case has resulted in conviction. Even then, the activist in question was merely fined some $25 and given a conditional discharge for three months.

Now, however, the group faces its biggest and gravest legal challenge yet – and without the National Security Bill having even entered into law. Eight activists, including Palestine Action co-founders Huda Ammori and Richard Barnard, face trial on 10 October for a variety of alleged offenses, and face many years in prison individually and collectively as a result.

A copy of their indictment has been seen by The Electronic Intifada. The charges leveled include conspiracy to commit burglary, and intent to destroy or damage property. The eight activists are said to have “conspired together and with others unknown to enter as a trespasser” into Elbit’s London headquarters “with intent to do unlawful damage to the said building or anything therein.”

That location also saw the group’s very first action, when activists stormed the office, trashed facilities, and spray painted a number of phrases on the interior walls, including “we will be back.”

Alerting target sites and Elbit’s supporting companies of future actions is a calling card of Palestine Action. It is this trademark that accounts for the most serious charge leveled against Ammori, Barnard and their comrade Emily Arnott: conspiracy to blackmail. Between August 2020 and February the next year, the trio are said to have:

“Conspired together and with persons unknown to make unwarranted demands by sending letters and emails to Lasalle Ltd, requiring them to sever ties with Elbit Ltd and to evict Elbit Ltd from their premises, with menaces.”

This refers to Palestine Action activists writing to Jones Lang LaSalle Inc, encouraging the company to turf Elbit out of the premises, and promising to expand their campaign if their requests weren’t met.

Numerous protest groups have historically and in the present day advertised that their actions will continue until or unless their demands are met, including environmental movement Extinction Rebellion.

The boycott, divestment and sanctions (BDS) movement has also routinely used the prospect of boycotts and other punitive financial measures to compel companies to divest from Elbit, including HSBC.

Interpretation of blackmail in England and Wales can be broad and applicable to an individual seeking any form of “gain” – which is distinct from profit – from another individual or commercial entity, and can include a target’s loss of property. Sentencing guidelines are similarly non-specific, granting courts the power to hand down a variety of severe penalties for blackmail if defendants are found guilty.

The maximum penalty for blackmail under English and Welsh law is 14 years in prison.

The use of blackmail charges represents an unprecedented escalation by British authorities. Palestine Action activists believe this campaign is politically motivated, could well be inspired and sustained by ongoing, direct lobbying from the Zionist state, and is ultimately concerned with terminating the group’s activities.

Farkash-Hacohen specifically referred to Palestine Action’s incipient protests against Elbit, branding their activities part of “the delegitimization campaign against Israel [that] has become widespread throughout Europe and the world.”

“Only last weekend, the offices of an Israeli security company were vandalized, for the fourth time in the last month. We want Israeli companies to continue doing business in London. It’s good for both countries,” she added.

It was not long after this intervention that Ammori and Barnard spotted a covert surveillance camera installed on a public school facing their home. A phone call to the school confirmed it was placed by police.

Nevertheless, their campaigning continued, and on 21 November the offices of Jones Lang LaSalle in London’s Finsbury Park were defaced with red paint, representing the blood of Palestinians.

Four days later that August 2020, the pair say they were arrested at the Welsh border by counter-terrorism police and questioned for hours. They were, they say, deprived of a right to silence by the UK’s draconian counter-terrorism laws. Their laptops were also seized, material contained therein apparently providing some of the basis for their blackmail charges.

The blackmail arrest came 3 February this year. Police surrounded and raided Ammori and Barnard’s home, seizing belongings including their passports. They were raided again, they said, 20 hours later.

Undeterred, their activism – and that of Palestine Action – has continued apace.

“Every moment the Israeli arms industry is disrupted is a victory; every moment Elbit Systems can not operate disrupts the war machine which reproduces imperialist violence across the world,” Ammori told The Electronic Intifada.

“The acts we’re on trial for, inspired a direct action movement which forced the closure of two Israeli arms sites in Britain. Risking our liberty to crush Israel’s arms industry is the least we could do in solidarity with Palestinians on the frontline.”

Palestine Action believes its physical targeting of Elbit assets has also drawn visceral attention to the fact that London’s complicity in Israeli apartheid is far from casual or limited to diplomatic support and public defenses of the Zionist state’s murderous policies in parliament and the media.

Elbit produces its infamous Hermes 450/900 drones on British soil, which comprise 85 percent of Israel’s unmanned airborne fleet and are routinely used to devastating effect in the occupied territories.

It may be precisely because of this blood-soaked reality that Elbit has hitherto been reluctant to press serious charges against Palestine Action protesters. After all, doing so would raise the prospect of damning testimony about the use of its products in serious human rights abuses against Palestinian civilians being revealed in open court, negative publicity the company could do without.

It’s for this reason that, while to a degree mortified to be standing trial on blackmail charges, and potentially facing a lengthy prison sentence as a result, Ammori remains defiant.

“Whilst we may be the ones facing a politically charged prosecution, it’s Elbit Systems with the extensive rap sheet of crimes against the Palestinian people, and humanity as a whole. It should be Elbit who are afraid of the dock, not us,” she said.

Kit Klarenberg is an investigative journalist exploring the role of intelligence services in shaping politics and perceptions. Twitter: @KitKlarenberg.