On each million of which they will also benefit from a new £55,000 tax cut.

The greatest irony of this is that the first multimillion pound bankers’ bonuses will be going this Christmas to bankers who shorted the pound before Kwasi Kwarteng’s “mini-budget”.

The cap on bankers’ bonuses was largely a sop to the public who had bailed out the bankers with public money borrowed – with trillions in interest – from the very bankers we were bailing out. In effect Gordon Brown created sterling and gave it free to the bankers who caused the collapse, so they could lend it to the public purse and we could pay it back over two decades of public austerity.

The idea of the cap on bankers’ bonuses was to remove the perverse incentive whereby a banker got a bonus of ten years salary by creating “assets” of bad loans, with no care whether those loans collapsed or not two years later, as he already had his ten years’ bonus. The Tories have just brought back that perverse incentive.

Krug all round in the City!! It’s a bonanza for lap dance club owners and cocaine dealers. It’s a disaster for us.

This perverse incentive will be needed to keep any money flowing into UK mortgages. With the Bank rate sure to exceed 5% in the next few months and inflation continuing, mortgage rates will be in double digits by this time next year, and we are only a couple of years away from mass default and repossession.

The wealthy will of course be able to use some of their tax cut money to take advantage of the stamp duty cut and snap up the repossessed properties as buy to let. That is what the Tories call growing the economy.

The Tories have declared class war by simply giving more money to rich people. This is based on two contentions:

The problem is, the days of the manufacturing entrepreneur in the UK are long gone. Rich people invest their money in the overheated housing market, or invest it overseas. Given Kwarteng’s borrowing spectacular is crashing the pound, the chances of any significant proportion of the money he has just given the wealthy being invested in UK assets is virtually nil.

The second proposition is manifestly untrue. Poor people have a far higher propensity to spend any extra money locally than rich people. They seldom have much choice. If you want to boost the UK economy, give money to the poor.

We should not forget that not only do we have this huge tax giveaway to the rich, we have the decision to tackle the energy crisis by yet more taxpayer borrowing, so the war profiteering of the energy companies will be paid for by ordinary people through yet more years of austerity and cuts to public services.

The notion of borrowing to boost public spending and demand during a recession is time-honoured. But borrowing to subsidise the super-profits of energy companies and to fund tax cuts for the rich is simply class warfare, an undisguised transfer of wealth from the poor to the rich. I have used the word “poor” throughout this article – as we become a helot society, that term encompasses much of the working population.

There will be a part two of this class warfare – the attack on workers’ rights, on the right to strike, on paid holiday, on maximum working hours, on the minimum wage, on sick pay and many more.

A couple of weeks ago I explained that I believed we were approaching a crisis of capitalism. I must confess it did not occur to me that it would be the Tories who start the class war.

I want to finish with one hopeful thought. The Tory media have of course been delighted with this extreme right wing agenda. The Daily Mail, as you might imagine, was crowing like crazy.

But there is a limit to how far you can fleece even Tory voters without their noticing. There was a fundamental adverse reaction from the Daily Mail’s online readers. These were the “best-rated” comments. 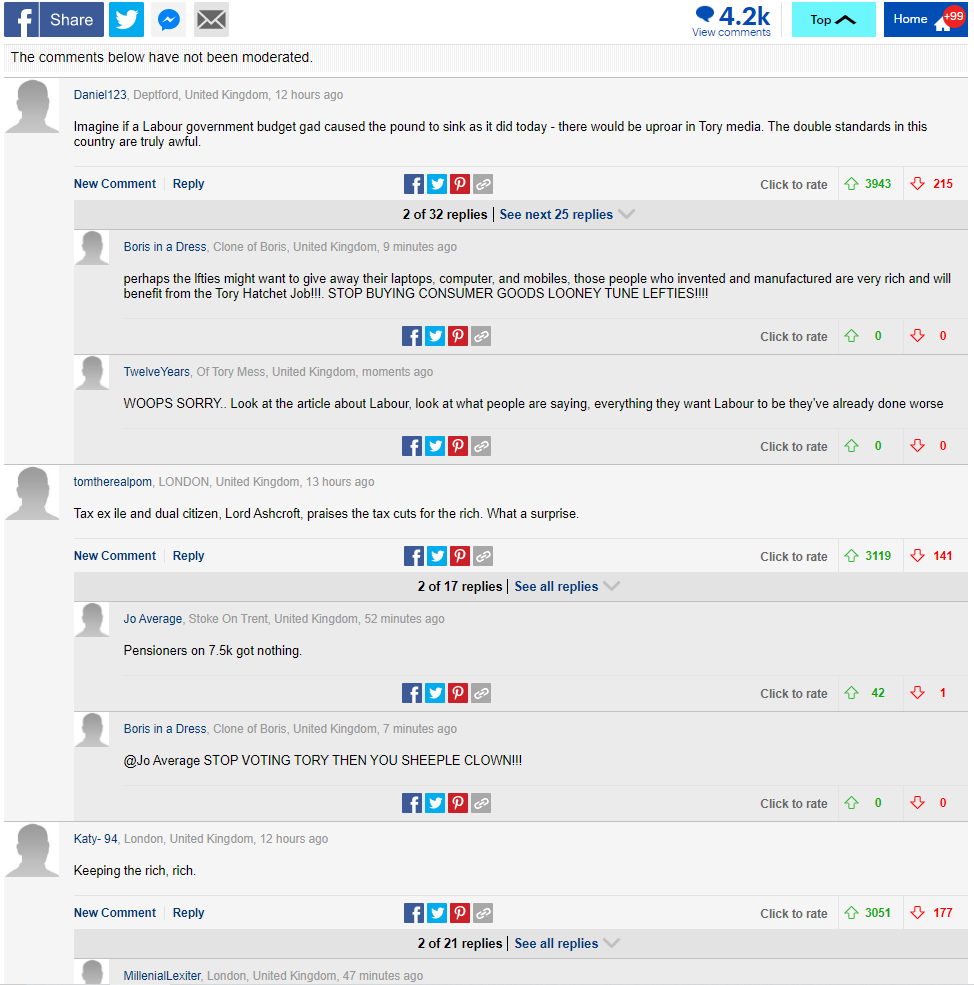 And these were the “worst-rated” comments 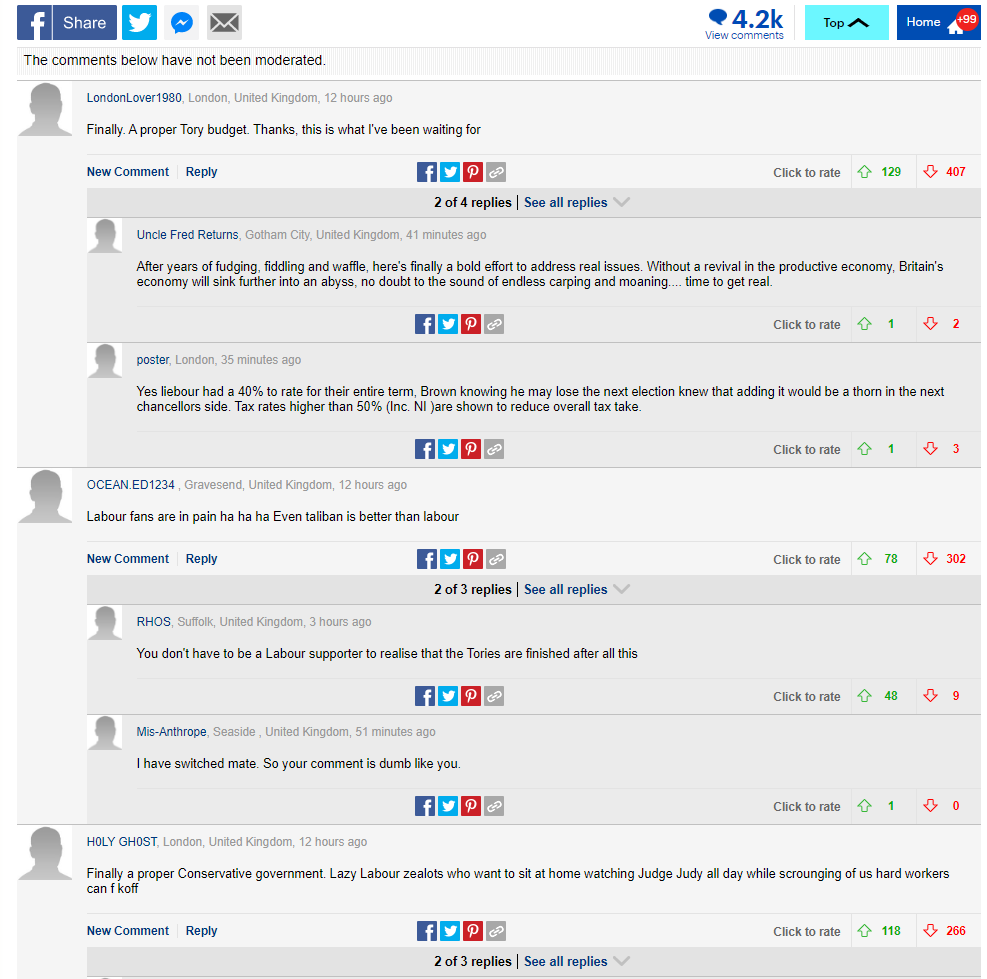 Even the Mail’s readers gave the worst rating by far to a comment that said “at last, a proper Tory government”, and uprated the negative comments by a ration of ten to one. The Tories have lost their own room. Once you are significantly too right wing for Mail readers, you are way out there. These comments also put the BBC’s carefully selected, Tory supporting “vox-pops” into stark contrast.

It is a great tragedy that just as the Tory party commits electoral suicide, the Labour Party reaches a climax of support for neo-liberalism and private sector, for profit provision of public services. There is simply no functioning democracy in the UK that offers voters any genuine choice of political direction. I remain convinced the only solution is to destroy the UK as a political unit.