John J. Ray III, the newly appointed CEO of bankrupt crypto player FTX’s sprawling empire who played the same role in the then-biggest-evah Enron bankruptcy and other big corporate implosions, filed his formal initial assessment with the Delaware bankruptcy court in the form of declaration, embedded below.

As expected the FTX and the companies related to it are a huge criminal mess.

In point 5 of his filing the new CEO is not holding back:

Never in my career have I seen such a complete failure of corporate controls and such a complete absence of trustworthy financial information as occurred here. From compromised systems integrity and faulty regulatory oversight abroad, to the concentration of control in the hands of a very small group of inexperienced, unsophisticated and potentially compromised individuals, this situation is unprecedented. …

“Potentially compromised individuals” might refer to rampant use of drugs at FTX. But it could also point to some darker connections.

At the stage of this filing, Ray could only make an approximate description of the business, putting operations into four “silos” and describing the major legal entities and activities in each.

Let us look at the things FTX did not have:

So far, Ray has found only $564 million of cash and have moved $760 million of crypto to cold wallets.

That’s only $564 million of real money in an ‘exchange’ that just months ago was valued at $32 billion and cashed in hundreds of millions as new capital. 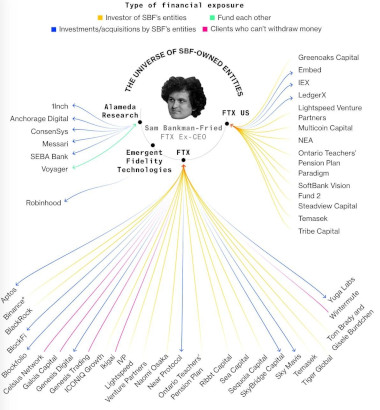 Several billions of the customer funds the company was supposed to hold had been ‘lent out’ to Sam Bankman-Fried, the main owner and CEO, for ‘personal use’.

How could BlackRock, Softbank, the Ontario Teachers Pension Plan and other real world investors give money to these people? What does it say about their credibility?

Keep in mind, [FTX & Co] are the entities into which some of the smartest and best known venture capital firms on the planet threw billions of dollars. These are the entities around which countless journalists fawningly editorialized, spilling untold gallons of digital ink in the service of lionizing a would-be messiah. These are the entities that were glorified on a weekly basis by the most widely-followed mainstream financial media outlets on Earth.

The suggestion that this was so elaborate a ruse that no one — neither the most seasoned VCs nor the investigative arms of media conglomerates run by billionaires — could’ve known it might end in tears, beggars belief. The fact is, nobody looked, because nobody wanted to see.

According to Web3 is Going Great some 12 other crypto ‘exchanges’ and ‘funds’ have so far closed down or halted all withdrawals of customer funds as a consequence of the downfall of the FTX scam. More will follow.

Binance, the largest crypto ‘exchange’, who’s owner had pulled the rug on FTX, is still holding out. It is like FTX a scam and pyramid scheme that will eventually come down:

Binance is an enormous crypto exchange run by Changpeng Zhao, more commonly known as CZ. No one really knows where Binance is headquartered, or why some person who’s claimed to be a low-level staffer is listed on official documents. A 2018 document exposed that Binance had come up with an elaborate plan to create a US entity that would be used to distract regulators, while behind the scenes they helped US-based customers evade geographic restrictions on the highly leveraged crypto derivatives trading that the US regulates.

All super normal, above-board stuff. Nothing to see here.

The small crypto traders who use Binance as ‘exchange’ and who have ‘wallets’ with crypto ‘coins’ at Binance do not have custodial agreements with it. They are thereby unsecured creditors, the last in line who will not even receive pennies for dollars when the bankruptcy curtains come down.

Matt Stoller asks why these scams are allowed. He also gives the answer – political corruption:

And behind all of these [regulatory] fights was the money and political prestige of some most powerful people in Silicon Valley, who were funding a large political fight to write the rules for crypto, with everyone from former Treasury Secretary Larry Summers to former SEC Chair Mary Jo White on the payroll. (Even now, even after it was all revealed as a Ponzi scheme, Congress is still trying to write rules favorable to the industry. It’s like, guys, stop it. There’s no more bribe money!)

I don’t think that crypto should be regulated in any way. It would only give legitimacy to a huge scam that has little to do with the real economy. It would also lead to calls for bailouts when the next crypto pyramid scheme goes down. Potential bailouts are probably why Sam Bankman-Fried also tried to get some friendly regulation for his schemes.

But those entities that are currently regulated – banks, listed companies and funds – should be prohibited from ‘investing’ in anything crypto. Should they fall down because some other crypto hick-up occurs the real economy would take some damage.

Congress now promises to look deeper into the crypto scam:

The House Financial Services Committee will hold a hearing next month to investigate the collapse of top crypto exchange FTX, lawmakers announced Wednesday.

Reps. Maxine Waters (D-Calif.) and Patrick McHenry (R-N.C.), the top lawmakers on the committee, said in a statement that they expect disgraced FTX founder Sam Bankman-Fried to appear before Congress.

1) A huge thanks to @MaxineWaters , @PatrickMcHenry , and the whole House Financial Services Committee for having us today to talk about the future of digital assets.

The meeting was productive and I’m really grateful for the engagement and thoughts from policymakers. 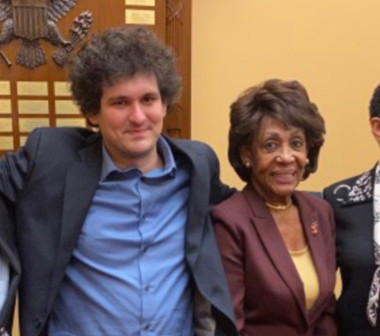 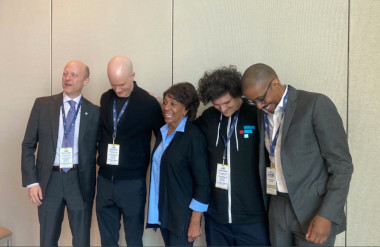 So how big were the bribes Maxime Waters, Patrick McHenry and others received from Sam Bankman-Fried and his companies?

And what about the media that kept writing friendly puff pieces about Sam Bankman-Fried and the false ‘effective altruism’ ideology he represented even after his companies came down?

The conference, scheduled for Nov. 30, will bring together the biggest newsmakers in business, politics and culture.

One wonders how many of the participants still want him to show up.

I don’t see how Bankman-Fried does not wind up in jail. The US is very loath to prosecute white collar criminals, but this story has become way too visible, too many small fry lost money, and the conduct was too egregious for this not to be punished. Given the utter chaos of the financials, it may take a prosecutor who can argue jurisdiction and venue to master enough details to gin up a filing and get Bankman-Fried. If nothing else, there’s always mail and wire fraud to get discovery started. If no one else gets there first, expect a group of attorneys general from red states to saddle up.

Bankman-Fried is young, has hundreds of millions stashed away and is connected well enough to have an easy life in jail. Isn’t there some better punishment one could think of?