Greek captain of the Tahrir Giorgos Klontzas has confirmed the use of violence on him by the israeli soldiers during his interrogation in a interview he gave to http://www.Omniatv.com

He specifically reports that he was handcuffed on hands and feet , very tightly which created a blood circulation problem and that in order to make him give his fingerprints he was held by three soldiers and one was holding him in a strangling way almost suffocating him.

At one point they stuck two fingers in his eyes creating very strong pain. He said that he was very calm, he did not speak aggressively and that he just requested to see a lawyer… He also confirms that some activists were very badly treated. 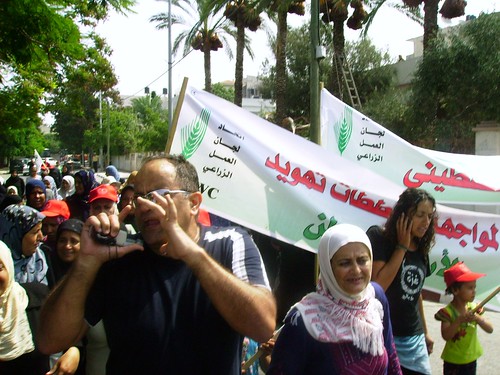 END_OF_DOCUMENT_TOKEN_TO_BE_REPLACED

Contributor Amir Alwani was back at Occupy Nova Scotia to document some of the speakers and protesters.  He made some interesting discoveries.  In the first segment, a protester voices his concern over the structure of the General Assembly within the overall movement.  He illustrates the irony that people have taken to the streets as the 99% fed up with the rule by the 1%, yet many congregate in choir fashion around one speaker, often chanting the message of the “leader.”  He is quick to point out that this does not invalidate the entire movement, but it is something we certainly should be mindful of as activists. END_OF_DOCUMENT_TOKEN_TO_BE_REPLACED

Ed Miliband has just posted an article in which he notices the existence of the occupation of Saint Paul’s, and of ‘hundreds of similar demonstrations in cities across the world’. The piece is a masterclass in political positioning and it deserves a little close reading.