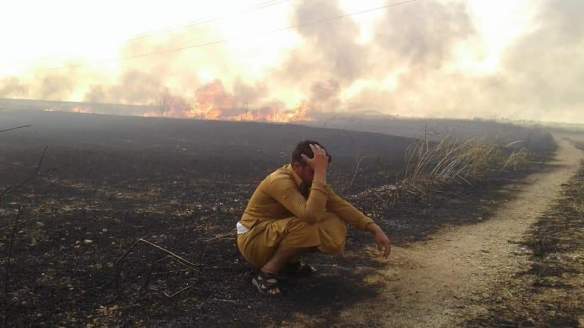 Apache helicopters of the US occupation forces flew low Sunday morning, according to residents of the Adla village, in the Shaddadi countryside, south of Hasaka, as they dropped ‘thermal balloons’, an incendiary weapon, causing the wheat fields to explode into flames while the hot dry winds fanned the raging fire.

After delivering their fiery pay-load, the helicopters flew close to homes in an aggressive manner, which caused residents and especially small children to fear for their lives.  The military maneuver was delivering a clear message: don’t sell your wheat to the Syrian government. Head of Hasaka Agricultural Directorate Rajab Salameh said in a statement to SANA that several fires have broken out in agricultural fields in Tal Tamer countryside, as well.

The US illegal bases in Syria fly Apache helicopters.  US President Trump portrays himself as a champion of the American Christians, and he has millions of loyal supporters among the Christian churches across the US.  However, the Christian Bible states in Deuteronomy 20:19 that it is a sin against God to destroy food or food crops even during times of war.

Bread is the most important staple in Syria, and two weeks into the annual wheat harvest, Damascus is keen on securing its supply of grain, while beset by the global pandemic.  On May 4, President Assad said in a meeting with his COVID-19 team that “our most difficult internal challenge is securing basic goods, especially foodstuffs.”

Since the beginning of the US-NATO attack on Syria in 2011, wheat production has fallen from an average of 4.1 million tons per year to just 2.2 million tons in 2019. Syria had been a wheat importer but switched to being an exporter of grain in the 1990s.

According to the UN, Syria was hit by acute food insecurity in 2019, with approximately 6.5 million people considered food insecure.

The northern provinces of Hasakah, Raqqa, Aleppo, and Deir e-Zor, in addition to Hama in central Syria, accounting for 96% of total national wheat production. Using fire as a weapon of war, 85,000 hectares of grain were burnt in 2019, and the Syrian government was forced to import 2.7 million tons to cover the losses. Destroying the Syrian agriculture has been a war strategy used by various enemies of Syria, and has resulted in a mass migration of residents in the villages to Germany, by way of Greece, via the smuggler-boats in Turkey.

The Syrian ‘breadbasket’, the northeastern region, is now controlled by the Kurdish-dominated Autonomous Administration of North and East Syria (AA). In 2019, almost half of the country’s domestic wheat production was produced within the AA territory, and they managed to buy it from farmers at a price lower than offered by Damascus, which suggests that Damascus may be denied the current harvest.

On May 9, Raqqa began its wheat harvest and photos of fires spread rapidly across various social media.  Competition between the AA and Damascus means the Syrian government will be forced to import grains to meet the domestic demand of about 4.3 million tons.

Youssef Qassem, the General Director of the Syrian Grain Establishment, said 200,000 tons of wheat from Russia has been ordered, and a ship carrying 26,000 tons of wheat coming from Russia had arrived at the port of Tartus, with further shipments to arrive. He added that the wheat is immediately moved from the port to the mills, and said “Preparations are underway to receive the wheat when the harvest season begins next month where 49 centers have been equipped to facilitate the reception of wheat and pay the farmers,” while pointing out that the reopening of the Aleppo-Damascus road has contributed greatly to reducing the costs of transporting wheat.

The AA has talked repeatedly to the Syrian government in Damascus, concerning the future of the northeast, but has not resolved their differences. Ilham Ahmed, co-president of the Executive Council of AA, has been negotiating with Damascus and she is also working closely with the US government representatives in Syria.  Ilham Ahmed is rumored to be the one who gave the idea recently for the US military to target a specific farm in Hasaka, after she had met with Syrian Arab tribal leaders, and found some opposition to selling to the AA.

The armed wing of the AA is the Syrian Democratic Forces (SDF), led by the Kurdish YPG militia, who partnered with the US occupation forces in the fight against ISIS, which ended in 2017. Even though Trump allowed President Erdogan of Turkey to invade Syria, the US military is still working in support of the SDF and AA on many levels. The Kurds and their US ally hold the wheat as a trump card in ongoing negotiations.

“Assad needs access to cereal crops in northeast Syria to prevent a bread crisis in the areas of western Syria that he controls,” Syria analyst Nicholas Heras said. “Wheat is a weapon of great power in this next phase of the Syrian conflict,” said Heras, and he added that the Kurds and their US ally “have a significant stockpile of this wheat weapon. It can be used to apply pressure on the (Syrian government), and on Russia, to force concessions in the UN-led diplomatic process.”

The Kurds are a minority in Syria, and even in the northeastern region, they are a minority, despite being in ‘control’. The non-Kurdish population is a mix of Syrian Arabs, Syrian Christians, Syrian Armenians and many of them have suffered under the Kurdish administration, which saw non-Kurds being ethnically cleansed, as they lost homes, shops, and farms at the hands of the SDF.

Syria was before 2011, one of the world’s most important agricultural sources of hard durum wheat.  Italy, famous for its pasta, bought hard durum wheat from Syria for decades. During the occupation of Reqaa by ISIS, they shipped by truckloads the wheat stores, which amounted to the equivalent of 8 years of Syrian wheat.  ISIS turned to their trusted business partner, President Erdogan of Turkey, and Erdogan bought the wheat from them.  Erdogan sold the stolen Syrian wheat to Europe and Italy once again had its favorite Syrian wheat running through its industrial pasta machines. The Italians have eaten pasta made of the stolen Syrian wheat.  Perhaps it has left a bitter taste in their mouths.

Steven Sahiounie is an award-winning journalist