This is an update to last weeks post Syria – Frontline Breach Opens Door To A Deep Battle For Idlib. 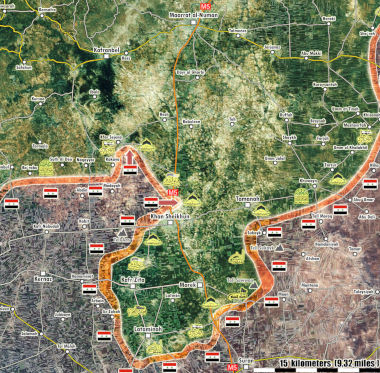 The jihadists in the soon closed cauldron south of that point are now cut off from road bound resupplies.

Throughout the last nights reinforcements from north Idleb tried to reach Khan Shaykhun. The Syrian and Russian airforce prevented them (vid) from getting there.

This map shows the situation five days ago with the position of the Turkish observation point within the area. 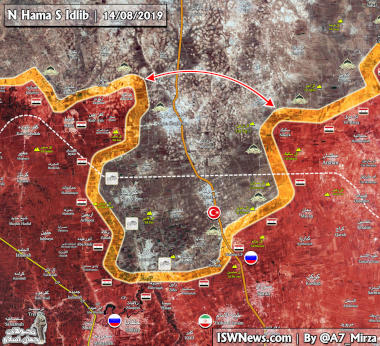 Before the convoy passed through Maarat al-Numan, 20 kilometers north of Khan Shaykhun, the Russian airforce bombed its path (vid). The leader of Faylq al-Sham, a ‘Syrian rebel’ group controlled by the Turkish intelligence service, was escorting the Turkish army convoy in a technical. He was killed. No Turkish soldiers were harmed. The convoy stopped and will have to return to Turkey. The tanks and the ammunition will not reach the jihadis in Khan Shaykhun.

The Turkish defense ministry falsely claimed that three civilians were killed in the bombing. The Syrian government condemned the Turkish invasion.

This now is the right time for the Syrian army to bring in reserves and to open the deep battle for Idleb by quickly moving northwards along the M5 highway.