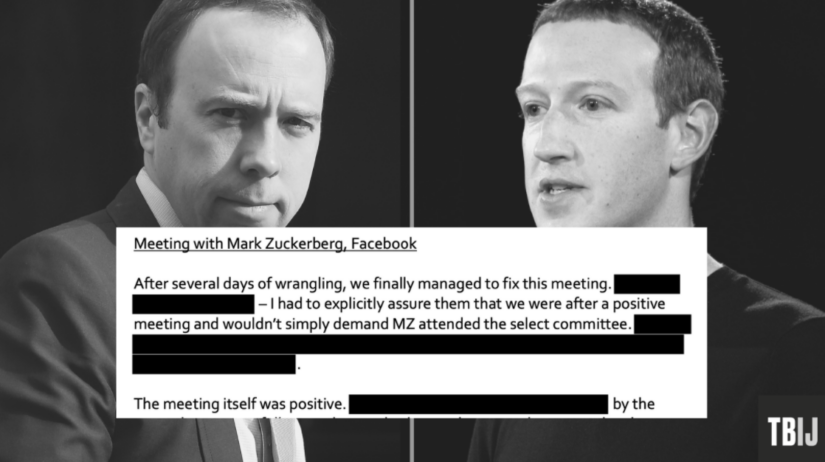 Two years ago, Matthew Chapman, a reporter at the Bureau of Investigative journalism (TBIJ), fired off what he believed would be a simple Freedom of Information (FOI) request. It asked for notes from a meeting between Facebook boss Mark Zuckerberg and Matt Hancock, who at the time was the government minister responsible for digital.

The timing of the meeting (May 2018) was significant. The Cambridge Analytica scandal had just broken and parliament was investigating how the personal data of tens of millions of Facebook users was stolen and whether it was used in the Trump and Brexit campaigns. Zuckerberg had refused three times to appear in front of the select committee running the investigation and in public Hancock had condemned the Facebook boss for dodging MPs’ questions.

It seemed odd to Chapman that the government had made no attempt to publicise securing one-on-one time with the elusive Zuckerberg. The ensuing struggle to get hold of the notes turned from weeks to months, and then years, as the Department for Digital, Culture, Media and Sport (DCMS) tried every trick in the book to block the release of the meeting minutes.

Even after the Information Commissioner’s Office ruled it was in the public interest to release the notes, the government instructed lawyers to appeal the decision. Eventually, after the TBIJ signed up lawyers from Leigh Day and Monckton Chambers to fight a tribunal case, the Government relented.

Last Monday night, almost exactly two years to the day Chapman first lodged the FOI request, he finally received notes from the secret meeting. When he read them it immediately became clear why the government had fought so hard to keep details under wraps.

It is abundantly obvious who holds the upper hand in this power dynamic. The UK government virtually had to beg for a moment of Zuckerberg’s time (backstage at a technology conference in Paris). In order to secure the meeting, civil servants explicitly told Zuckerberg the meeting would be ‘positive’ and he would not be required to attend a select committee hearing, immediately undermining all the work former DCMS Select Committee chair Damian Collins had been doing to hold Facebook to account.

However, it is not even Hancock’s obsequious behaviour that is the most shocking revelation that emerges from the meeting minutes.

The big takeaway is Mark Zuckerberg personally threatening Hancock with withdrawing investment in the UK in favour of another European country. Shockingly the threat appears to work. Rather than standing up to Zuckerberg, Hancock instead offers a “new beginning” and a tone shift from “threatening regulation to encouraging collaborative working to ensure legislation is proportionate and innovation-friendly”.

Details of what occurred at the meeting come at a crucial juncture. The UK Government is about to publish its final response to a consultation into proposed ‘online harms’ legislation, which could set up a regulator to police social media harms ranging from disinformation to child sexual exploitation.

However, the fear is the legislation will be soft-touch and will allow social media platforms to effectively mark their own homework. It is believed the regulator will only have the ability to ensure technology companies adhere to their own terms and conditions, which critics believe are currently inadequate.

The revelations get to the core of a key remit of the TBIJ, which is investigating Big Tech and the use of data. The tech industry is a powerful force and one that needs to be held accountable. The Bureau have been doing this all year and will continue to do so.

In response to this story, the new chair of the DCMS select committee Julian Knight raised questions about Hancock’s decision to meet Zuckerberg secretly to “express concerns about the tone of Government policy towards online regulation”. Jo Stevens, shadow secretary of state for DCMS, points out Facebook has had 18 months to continue threatening what reporting has uncovered during the long delays to the Online Harms Bill, while unregulated content on Facebook continues to cause “real-life harm”.

It is a relief to TBIJ who have managed to reveal details of the secret meeting before the government makes its announcement on online harms, which is due within days. This type of battle with the government for information that should be in the public domain is, unfortunately, a regular occurrence. TBIJ has several similar actions currently active, including one case taken to tribunal.

The information in the Zuckerberg case should have been in the public domain much sooner to allow proper scrutiny of how Facebook is using private threats to shape legislation behind the scenes. The DCMS’ failure to properly comply with a basic FOI request – the department breached FOI law twice and took a year to acknowledge it even had notes from the meeting – has done the public a great disservice.

It also raises further questions about what appears to be a disregard of FOI law within government and the lack of repercussions for those public bodies that breach it.