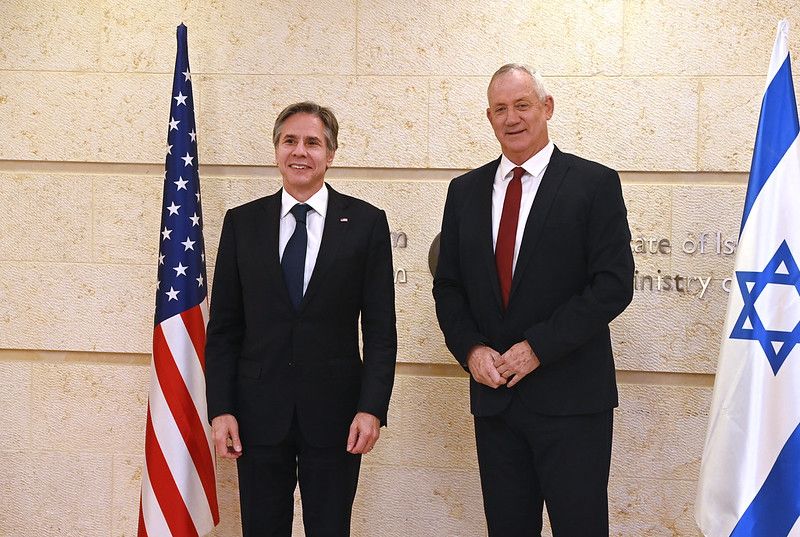 US Secretary of State Antony Blinken and Israeli Defense Minister Benny Gantz (Photo: US Embassy Jerusalem and in the public domain)

After the Israeli government designated six Palestinian human rights organizations as “terrorist” organizations, Jonathan Kuttab, the co-founder of Al Haq, one of the targeted organizations, suggested this showed Israel “realizes it has lost the public relations-war.”

“The world now knows and acknowledges the reality that it is an apartheid state and a systematic violator of human rights and international law,” Kuttab added. “The defense minister may be afraid that the day is approaching when he and other politicians and army generals may face prosecution before the International Criminal Court for war crimes and crimes against humanity, and he decided to silence these organizations and cripple their activities.”

Now, Front Line Defenders (FLD), based in Ireland, reports [PDF] that Al Haq was the target of spyware from the Israeli surveillance firm NSO Group. Ghassan Halaika, a field researcher and human rights defender for Al Haq, had their electronic device infected with Pegasus in July 2020.

FLD investigated several other devices belonging to members of the organizations that were labeled as “terrorist” organizations by Israeli Defense Minister Benny Gantz on October 19—Addameer, Defense for Children International — Palestine, the Union of Agricultural Work Committees, the Bisan Center for Research & Development, and the Union of Palestinian Women Committees.

“Five additional devices were hacked with the same spyware,” according to FLD. They had Citizen Lab and Amnesty International’s Security Lab review the findings and both confirmed, “with high confidence,” that the “phones were hacked with Pegasus.”

The NSO Group is a “notorious Israeli hacker-for-hire company” that was blacklisted by the United States government on November 3. The placement, which limits the ability of U.S. security researchers to collaborate with them, was a response to a massive journalism project in July that exposed the firm to unprecedented worldwide scrutiny.

“[We] strongly condemn the arbitrary, oppressive, and distressing revelations of spyware surveillance mass operation and call for a firm response, including concrete actions from the international community.”

“The parallel timelines of the FLD investigation and the Israeli designations are concerning,” they added. “The Israeli Minister of Defense’s designations of the civil society organizations only days after the initiation of this investigation may amount to an attempt at preemptively withholding evidence of surveillance and covering up surreptitious spyware actions.”

Ubai Aboudi, who runs the Bisan Center for Research and Development in Ramallah in the West Bank, is another human rights defender who was targeted.

Coverage from the Associated Press described his reaction to the attack on his device:

Aboudi said he lost “any sense of safety” through the “dehumanizing” hack of a phone that is at his side day and night and holds photos of his three children. He said his wife, the first three nights after learning of the hack, “didn’t sleep from the idea of having such deep intrusions into our privacy.”

He was especially concerned about eavesdroppers being privy to his communications with foreign diplomats. The researchers’ examination of Aboudi’s phone determined it was infected by Pegasus in February.

Aboudi asserted the “terrorist logo” was slapped on groups after the Israeli government failed to “persuade European governments and others to cut off financial support” to the six human rights organizations.

Salah Hammouri, a lawyer and field researcher for Addameer Prisoner Support and Human Rights Association in Jerusualem, also had his phone targeted.

“When Pegasus is installed on a person’s phone, an attacker has complete access to a phone’s messages, emails, media, microphone, camera, passwords, voice calls on messaging apps, location data, calls and contacts,” Front Line Defenders stated. “The spyware also has the potential to activate the phone camera and microphone, and spy on an individual’s calls and activities.”

“As such, the spyware not only allows for the surveillance of the target, but also anyone with whom they have contact via that device. This means that, in addition to the targeting of Palestinians, including dual nationals, non-Palestinians (including foreign nationals and diplomats) with whom these victims were in contact, including Israeli citizens, could have also been subject to this surveillance, which, in the case of its citizens, would amount to a breach of Israeli law.”

Front Line Defenders noted on October 18, 2021, the Israeli Minister of Interior revoked Hammouri’s “permanent residency in Jerusalem” and deported him. The government alleged he “breached” his “allegiance to the State of Israel.” He is a citizen of France.

Three other human rights defenders unnamed in the report had their devices attacked between November 2020 and April 2021.

With next to no evidence to back up the “terrorist” label, the Israeli government claimed the organizations could be linked to the Popular Front for the Liberation of Palestine (PFLP).

Previously, The Dissenter highlighted reporting from the Washington Post that showed how “power brokers” in the United States—former and current officials in the presidential administration of Barack Obama, Donald Trump, and Joe Biden—were paid to defend the NSO Group.

An NSO subsidiary known as OSY paid former Homeland Security secretary Jeh Johnson, who was part of the Obama administration, to review the company’s updated human rights policy. He gave it a “stamp of approval.”

Law firm King & Spalding was hired to lead the the NSO Group’s legal defense. Rod Rosenstein, former Trump deputy attorney general, was one of the advisers involved, the Post added.

A U.S. appeals court ruled on November 8 that Facebook may pursue their lawsuit because NSO Group acted as a “foreign government agent” and is not immune from liability.

“In 2019,” as the Post detailed, the Israeli hacker-for-hire company “embarked on a VIP spending spree in hopes of cleaning up its reputation” after they were sued for their alleged role in the murder of Jamal Khashoggi.

Three people were hired to help the NSO Group continue their work: Tom Ridge, the first Homeland Security secretary, Gerard Araud, France’s former ambassador to the U.S., and Juliette Kayyem, who was a Homeland Security official under Obama.

While the NSO Group (and a lesser competitor known as Candiru) were put on a trade blacklist, there have apparently been no repercussions for current and former officials who tried to boost the Israeli surveillance firm’s prospects in the United States.

The NSO Group must obtain licenses from the Israeli government to sell and use Pegasus, which means Israeli security agencies are probably well-aware of how the Palestinian human rights organizations had their personal devices attacked. In fact, officials likely approved of it, even if they claim they are “investigating” the “misuse” of the spyware against journalists, activists, and political opponents of governments throughout the world.

In 2014, 43 Israeli whistleblowers from Unit 8200 (essentially Israel’s NSA) signed on to a letter and refused to participate in any further operations against the Palestinian territories.

“The Palestinian population under military rule is completely exposed to espionage and surveillance by Israeli intelligence,” they stated. “It is used for political persecution and to create divisions within Palestinian society by recruiting collaborators and driving parts of Palestinian society against itself.”

“In many cases, intelligence prevents defendants from receiving a fair trial in military courts, as the evidence against them is not revealed.”