The ‘western’ media are euphoric about the ‘successful’ Ukrainian counterattack in Kharkov oblast.

All have fallen for the believe that the Ukrainian rapid advance has caused a Russian defeat. That however is not the case.

The main Russian forces had already left the area. What was left were sentry guards of the Luhansk People’s Republic and a few companies of the Russian National Guard which is more or less a police force. That is why the ‘western’ official talking with Reuters is quite cautious with his assessment:

“There’s an ongoing debate about the nature of the Russian drawdown, however

it’s likely that in strict military terms, this was a withdrawal, ordered and sanctioned by the general staff, rather than an outright collapse.”

“Obviously, it looks really dramatic. It’s a vast area of land. But we have to factor in the Russians have made some good decisions in terms of shortening their lines and making them more defensible, and sacrificing territory in order to do so,” the official said, adding he did not expect Russia to immediately seek to regain lost territory.

The main Russian reason for holding onto Izium southeast of Kharkov was to use it as a springboard to attack Sloviansk and Kramatorsk along the M-03 highway. However over the last months several Russian attempts to cross the Siverski Donets river south and east of Izium and to establish a bridgehead on the southern side had failed. 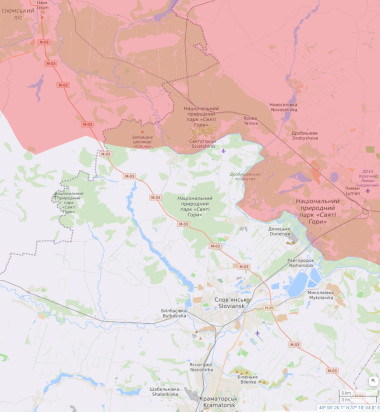 The Ukrainians were well established in the ‘Sherwood Forest’ on the southern side and had defeated all attempts to push a larger Russian forces into the area. (According to Yves SmithAlexander Mercouris had made that point and predicted a Russian withdrawal from Izium in one of his shows before the Kharkov ‘counteroffensive’ started.) I myself had missed that point.

The region, which is sparsely populated (Izium had a pre-war population of some 40,000), has little additional value. Russian forces that had been there shortly after the war began had been pulled out over time to rotate into other areas.

According Colonel Markus Reisner from the Austrian military the Ukraine used six full brigades (vid) in its attack. If Russian Defense Ministry numbers are halfway right the Ukrainian forces lost some 4,000+ soldiers, nearly two brigades, in the attack. These were troops that ran into areas that the Russian artillery had pre-registered. They received barrage after barrage and were destroyed.

The Russian air force caused additional damage. Hundreds of tanks and armored vehicles the ‘west’ had delivered to Ukraine were destroyed. Talk of large Russian material losses and of thousands of Russians taken prisoners of war are nonsense.

According to preliminary estimates from Jakub Janovsky, a military analyst and contributor to the Oryx blog tally of equipment losses, Russia lost 40 tanks, 50 infantry vehicles, 35 armored vehicles and two jets.

However other Washington Post journalists looked at the evidence:

The equipment left behind in the video amounts to about a tank company, Hodges said, which is typically outfitted with about 10 or 11 tanks.

Another video, taken along a street in central Izyum, shows a marooned 2S19 Msta self-powered howitzer. The system does not have obvious signs of being disabled.

Other pictures taken in Izyum show heavier damage to Russian military equipment, indicating they were hit in battle. One armored vehicle can be seen at a gas station in the city with bullet holes, burn marks and deflated tires.

Ukrainian forces published a video showing the husk of a TOS-1A, a multiple-rocket launcher, using its nickname “Solntsepyok.”

Given the huge areas that does not sound like large losses. British ‘intelligence’ claims that the 1st Guards Tank Army was destroyed in the attack are ludicrous. The 1st Guard has the equivalent of about 20 brigades with some hundred tanks and armored vehicles in each. Its units were not even in the area when the attack happened.

As Larry Johnson has laid out, planning for a withdrawal from a large area takes time. The Russian decision to let go of the Kharkov region must have been made before the Ukrainian counterattack was launched. That it was coming was known. Since mid of August the deployment map by Military Land showed strong tank formations south and west of the Izium area. The Russians had reported attacks on those and other units on a daily base. Dima of the Military Summary channel had mentioned them several times.

When the counterattack happened the Russian forces pulled back to the eastern side of the Oskol river and are now protected by it. At the southern end, near Lyman, the Siverski Donets river is used to cover the Russian forces. These are strong positions, hard to attack, that can be held by a limited force. 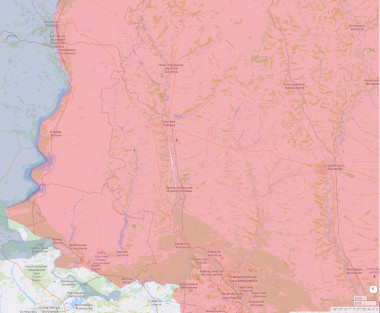 I had expected that Russia would draw in the attacking Ukrainian forces to then cut them off. But it did not had the forces, or interest, to do so now. It had instead ordered a withdrawal. The use of artillery and air force to attack the Ukrainian forces while they were still on the roads, attacking an enemy that was no longer there, has proved to be the right decision.

Colonel Reisner, linked above, says the first ‘counteroffensive’ in the south against Kherson was a major failure that has cost many Ukrainian lives. Another military professional, Lt.Col.(ret) Daniel Davis agrees:

When Putin prioritized the capture of the Donbas as his primary objective, the Kremlin conducted what’s known as “economy of force” missions in the north around Kharkiv and in the south near Kherson. The intent of the Russian missions in the north and south was to use as few troops as possible to keep the UAF tied up so that they could not move more troops to the Donbas to resist Russia’s offensive there. Russia then thinned its defenses even more in late August to deploy more troops to defend against the known offensive about to start near Kherson.
…
The additional Russian troops in Kherson appear to have helped Moscow’s forces inflict grievous casualties on the Ukrainian attackers in the Kherson region but fatally weakened Russian defenses in the Kharkiv region.

When the Ukrainian troops shocked the Russian defenders at the start of the Kharkiv offensive, the Russians began to surrender territory quickly. They not only had few troops left in the area, but those troops were mainly volunteers. Moscow began frantically sending reinforcements to try and stem the tide, but Ukraine advanced faster than Russia could get reinforcements in place. The Russian leadership was faced with a conundrum: order its troops to contest every meter of territory in an attempt to buy time for reinforcements to arrive, or evacuate the area and preserve its manpower for future fights.

They chose the latter. Russia not only surrendered Izyum without a fight but later evacuated nearly the whole of the territory they occupied north of Kharkiv all the way to the Russian border, up to 3,000 total square kilometers back under Ukrainian control. Many in the West are hailing this move as proving Ukraine is well on its way to winning the war and might even result in the downfall of Vladimir Putin. A little context might be helpful before making such sweeping judgments.

Daniel Davis says that “Moscow began frantically sending reinforcements to try and stem the tide”. He must refer to the video, released by the Russians, that showed armored air-mobile forces landing in huge Mi-26 helicopters. But Colonel Reisner says that those helicopters landed east of the Oskol river. The troops they carried never went into battle in the Kharkov region. The helicopter video was a deception as there was nothing left in the Kharkov region to reinforce.

Ukraine has likely expended the majority of its striking power in these twin offensives, suffered many casualties, and will require considerable replenishment and replacements before being able to go much further (there are reports that a smaller Ukrainian attack may be in the offing for Ugledar [southwest of Donetsk] but as of this writing none has materialized).

I also still expect another Ukrainian attack in southern Donbas region. But the Russian forces there were reportedly reinforced by the new 3rd Russian corps. Those are some 30-50,000 Russian veterans called up to form a new formation. They will likely be able to withstand anything the Ukraine can throw against them.

Yves just published a writeup on the more political side of things. Scholz continues to be one of the dimmest guys in this game: