Will China join the U.S. led ‘coalition’ to escort ships through the Strait of Hormuz?

It sounds unlikely but this Reuters piece claims that China is thinking about it:

China might escort ships in Gulf under U.S. proposal: envoy:

China might escort Chinese commercial vessels in Gulf waters under a U.S. proposal for a maritime coalition to secure oil shipping lanes following attacks on tankers, its envoy to the United Arab Emirates said on Tuesday.

“If there happens to be a very unsafe situation we will consider having our navy escort our commercial vessels,” Ambassador Ni Jian told Reuters in Abu Dhabi.

“We are studying the U.S. proposal on Gulf escort arrangements,” China’s embassy later said in a text message.
…
President Donald Trump said in a June 24 tweet that China, Japan and other countries “should be protecting their own ships” in the Gulf region, where the U.S. Navy’s Fifth Fleet is based in Bahrain.

It was not clear if Washington had made an official request to Beijing, which has had to tread softly in the Middle East due to its close energy ties with both Iran and Saudi Arabia.

So far it is only Britain which will go with the U.S. plans. France, Germany and other ‘allies’ rejected U.S. request to join the mission.

Reuters seems to misunderstand what the Chinese ambassador really said.

The message is in two parts: “we will consider having our navy escort our commercial vessels” and “We are studying the U.S. proposal on Gulf escort arrangements.” The Chinese embassy made no connection between the two statements.

China and other countries are receiving oil shipments from a larger number of Iranian tankers than was previously known, defying sanctions imposed by the United States to choke off Tehran’s main source of income, an investigation by The New York Times has found.

The Trump administration is starting to intensify sanctions enforcement to try to end the exports to China, which continues to be the largest buyer of Iranian oil. On July 22, Secretary of State Mike Pompeo announced sanctions against Zhuhai Zhenrong, a Chinese state-owned enterprise, and its top executive, Li Youmin, for “violating U.S. restrictions on Iran’s oil sector.”

“While I’m glad the administration sanctioned an initial round of Chinese actors, it must step up strong enforcement to deter Chinese and other foreign actors from violating U.S. sanctions against Iran,” said Senator Marco Rubio, Republican of Florida. “The Iranian regime has blatantly shipped millions of barrels of oil to China.”

To really tighten the screws on China, the Trump administration would need to punish the People’s Bank of China or other Chinese banks that engage in transactions with the Central Bank of Iran, Mr. Nephew said. The United States could also penalize the energy giant Sinopec, which, like Zhuhai Zhenrong, also imports oil from Iran.

China is unlikely to stop buying preferentially priced oil from Iran at least as long as the current trade war with the U.S. continues to intensify. It is also unlikely to join the U.S. ‘coalition’. But it will protect its commercial interest – i.e. its ships that haul goods between Iran and China.

China fears that the U.S. ‘coalition’ will confront its ships for breaking unilateral U.S. sanctions. The British did just that with the Iranian tanker they pirated at Gibraltar. There is also a historic precedence that demonstrates the necessity to protect Chinese ship against such U.S. schemes:

It is remembered much better in China than it is in the United States, that in 1993 the PRC was the most conspicuous victim of principled US piracy in the matter of the shipping vessel 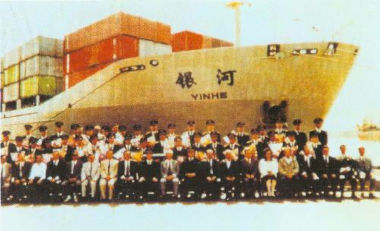 The US Navy confronted the

and forced it to interrupt its voyage and remain at sea for 20 days, until China agreed to proceed to a Saudi port for its 628 containers to be searched for chemical weapons precursors allegedly destined for Iran. Fortunately for China—and to the considerable embarrassment of the United States—the containers were found to contain nothing other than paint.

The United States declined to apologize because it had acted in “good faith”, which is apparently another name for “bad intelligence” (though some redfaced US officials privately accused the PRC of conducting a “sting” solely for the purpose of wrongfooting the United States). For its part, the PRC accused the United States of acting like a “self-styled world cop” and the Yinhe became something of a symbol for US double standards whenever the subject of “freedom of navigation” comes up.

For additional interesting details of the Yinhe story see here.

China will not allow a repeat of such action. It knows that the U.S. is increasingly hostile towards it and that it has to prepare for a larger conflict. It assumes that the current trade war is just the start of a much larger military-industrial game plan. As described by Peter Lee:

Decoupling the US economy from China, squeezing China related expectations out of the market, and shifting to a war with China footing insulates the US military from economic and political pressures to pursue a more moderate course in East Asia.

I expect IndoPACOM to agitate for an aggressive program–via its allies in the Philippine military–to confront the PRC over its artificial islands, especially Mischief Reef, in the South China Sea.

These facilities are a major affront to IndoPACOM’s manhood and must be removed. And that means war, or something close to it.

Remember, as IndoPACOM jefe Admiral Davidson put it: “China controls the South China Sea in all scenarios short of war.”

He’s not making these statements to signal American surrender, folks. IndoPACOM is China hawk HQ.
…
Between the global economic slowdown and the regional military buildup, I guesstimate the cost of taking on the PRC at a trillion dollars over the next decade.

But like they say, War with China: one trillion dollars. Postponing the loss of US hegemony in the Pacific: priceless.

This U.S. – China confrontation will be with us for at least the next decade. In such a scenario it makes no sense for China to make nice by joining a U.S. ‘coalition’ that is hostile to its Iranian friends. What it can, and should be ready to do, is to protect its ships from U.S. piracy.

2 thoughts on “China Considers To Protect Its Ships From … U.S. Piracy”