For those who cannot get to a cinema, we are organising an Online Cinema Screening on Monday 9 December between 6pm and 10pm. Tickets are £10. If you want to watch the film, click on the link below, buy your ticket, and on Monday you will be sent a link to the film and an access code. You can start watching any time between 6pm and 10pm. (This will only be available to people in the UK.)

The film is available to rent for private and public screenings before the General Election on 12 December. Please email screenings@dartmouthfilms.com for further information. 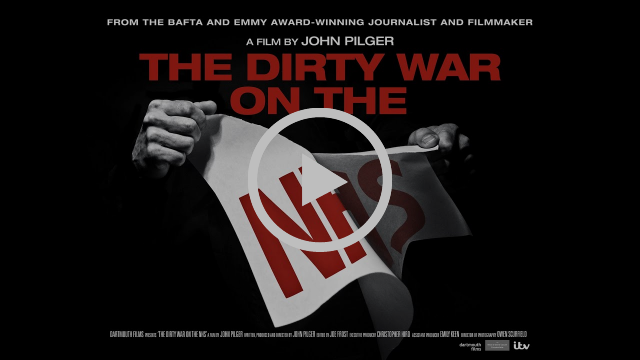 John Pilger investigates the long and often secret campaign to dismantle Britain’s pioneering National Health Service and privatise it off ‘by stealth’.

Designed to give millions of people “freedom from fear”, the NHS today is under threat of being sold off and converted to a free market model inspired by America’s disastrous health insurance system, which results in the death every year of an estimated 45,000 people.

Now President Trump says the NHS is “on the table” in any future trade deal with America. Filmed in Britain and the United States, this timely, compelling documentary touches us all and reveals what may be the last battle to preserve the most fundamental human right.

You can help us by:

TELLING your friends, family, colleagues, neighbours and contacts about the film and share this page: thedirtywaronnhs.com

One thought on “The Dirty War on the NHS: Save the Date: Online Cinema Screening on Mon 9 Dec”