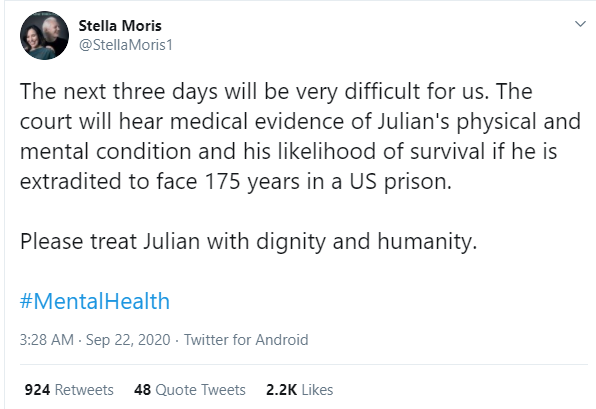 Along those lines, our reports on medical matters will be less detailed. We will do our best to summarize testimony relevant to prison conditions, the extradition process, and the dangers of isolation in a general sense. You can read our full report on Tuesday’s proceedings here. Here’s our recap:

The only witness today was Dr. Michael Kopelman, Emeritus Professor of Neuropsychiatry at King’s College London. Kopelman has evaluated Julian several times over since 2019, and he has diagnosed Julian with severe depression and Asperger’s syndrome. Kopelman noted that he is “as certain as a psychiatrist ever can be that, in the event of imminent extradition,” Julian “would indeed find a way to commit suicide.” When discussing the prison conditions Julian would face in America, Kopelman concluded that the “isolation he would experience in North America would be far worse than anything he experienced” in the Ecuadorian embassy or the U.K.

You can find a full report on today’s hearing here

Tonight (Tuesday, September 22) at 6:30 p.m. EDT (11:30 p.m. GMT), the People’s Forum is hosting “In Defense of Julian Assange,” a live book talk and panel discussion. You can RSVP here for this event, which will be moderated by journalist Anya Parampil and feature Margaret Kimberley, Nathan Fuller, and Renata Avila.

The next few days in Julian’s extradition hearing expected to remain focused on medical testimony. We will continue to keep you updated at our live blog. You can also find hearing coverage from Courage Foundation’s Director Nathan Fuller and real-time updates on Twitter.

2 thoughts on “Extraditing Julian Assange Would Likely Cause His Suicide”