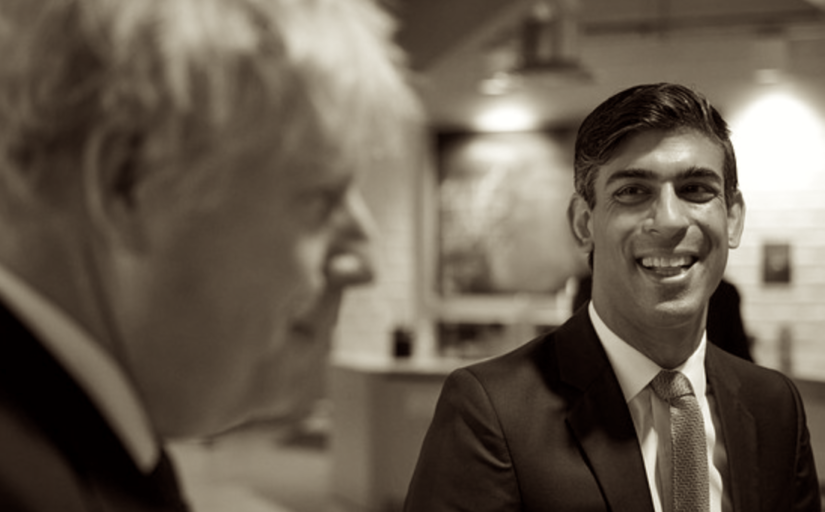 By Torsten Bell, Karl Handscomb and Adam Corlett: Back in 2015, 3.3 million working families were on track to lose an average of over £1,000 a year from the following April. As Figure 1 shows, today, the income of roughly twice as many families is at risk, with 6 million households (containing 12 million adults and 6 million children) set to have their income reduced by £20 a week from April 2021. This is principally because this time the cut will affect all recipients of Universal Credit or tax credits, whether they are working or not. The planned cut by Rishi Sunak, at around £8 billion, is therefore over twice as big as the £3.4 billion George Osborne intended (£3.7 billion in 2021-22 money).

Figure 1: The scale of the policy-induced income loss in 2021-22 would be over twice as large as the 2016-17 loss that George Osborne planned and then cancelled 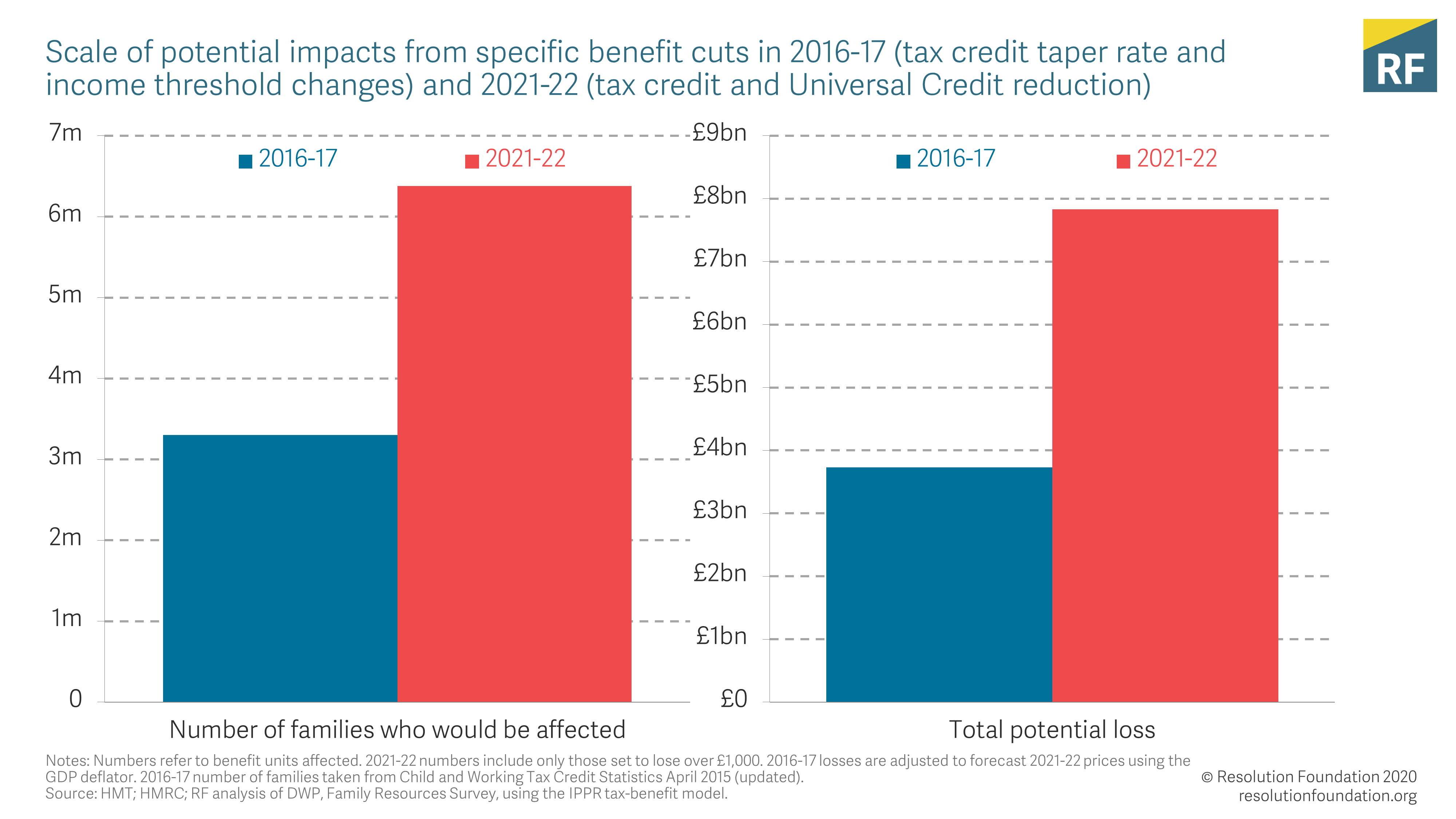 Of course, the circumstances of the 2015 debate were quite different, and there were other welfare cuts announced then too (including some that are still in the process of being rolled-out). But these specific sets of policies are notably similar in proposing a straightforward, highly visible cut to existing benefits claimants’ incomes between March and April (whether that’s 2016 or 2021).

The cut to benefit levels planned for next April stems from the ending of the time-limited increase to the basic rate of Universal Credit (and the tax credit equivalent) announced by the Chancellor  Rishi Sunak on 20th March as part of his pandemic response package. The £20 a week boost reflected the reality that the level of benefits were not adequate to protect the swiftly increasing number of households relying on them as the crisis hit. Exactly because that increase was a very significant and welcome move to bolster low- and middle-income families living standards, its removal will be a huge loss. Pressing ahead would see the level of unemployment support fall to its lowest real-terms level since 1990-91, and its lowest ever relative to average earnings. Indeed, the basic level of out-of-work support prior to the March boost was – at £73 a week (£3,800 a year) – less than half the absolute poverty line (see Figure 2).

Figure 2: If the planned cut in April proceeds, the rate of basic unemployment benefit will fall to the lowest level in real-terms since 1992 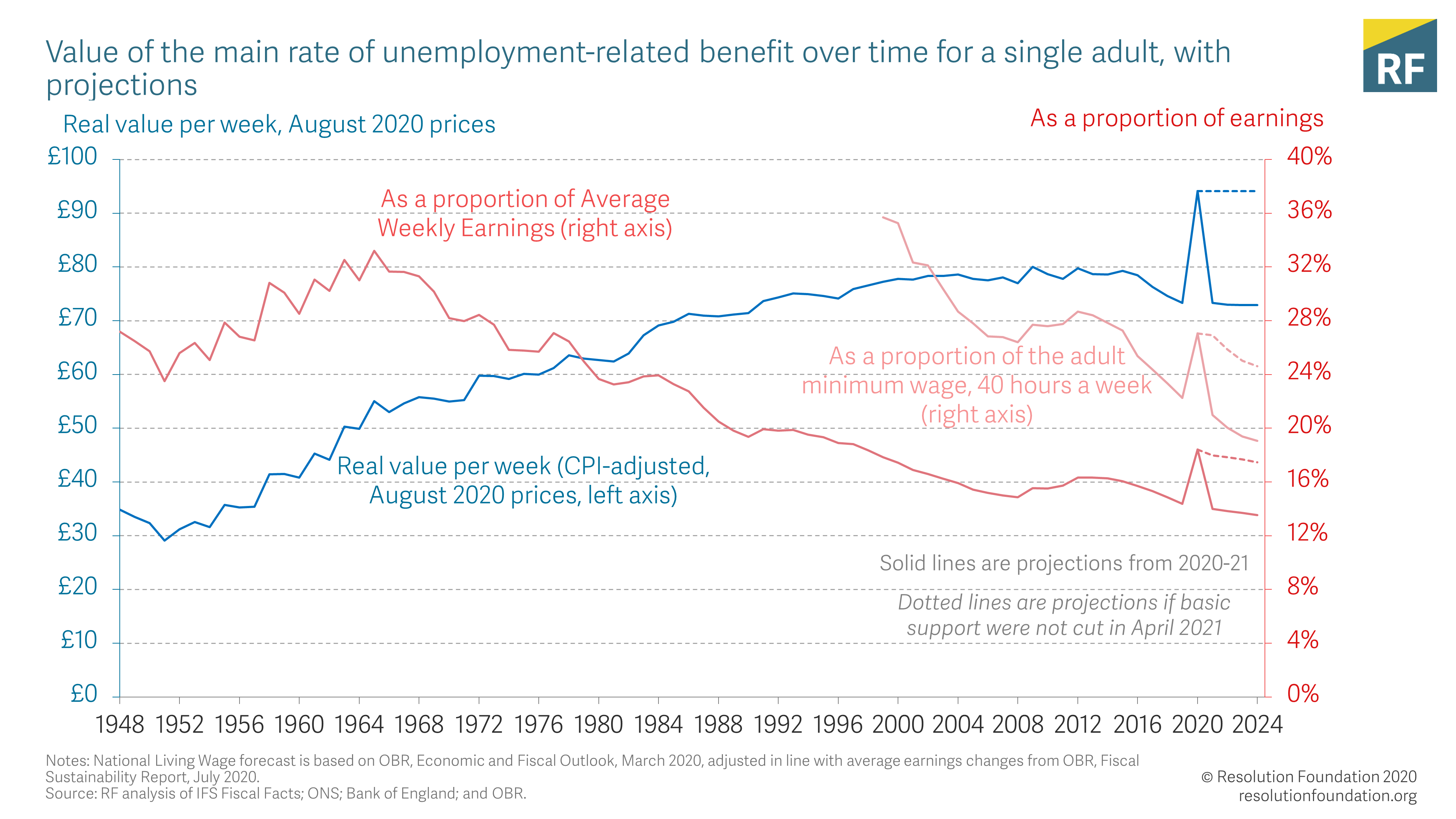 Returning to such levels in April would mean the average annual income of the bottom half of the population would be cut by £600 (with this average calculated including pensioners and others who would be unaffected), while the bottom fifth would lose an almost unimaginable 7 per cent of their disposable incomes (see Figure 3).

Figure 3 : The cut in benefits next year would see the poorest households lose 7 per cent of their income 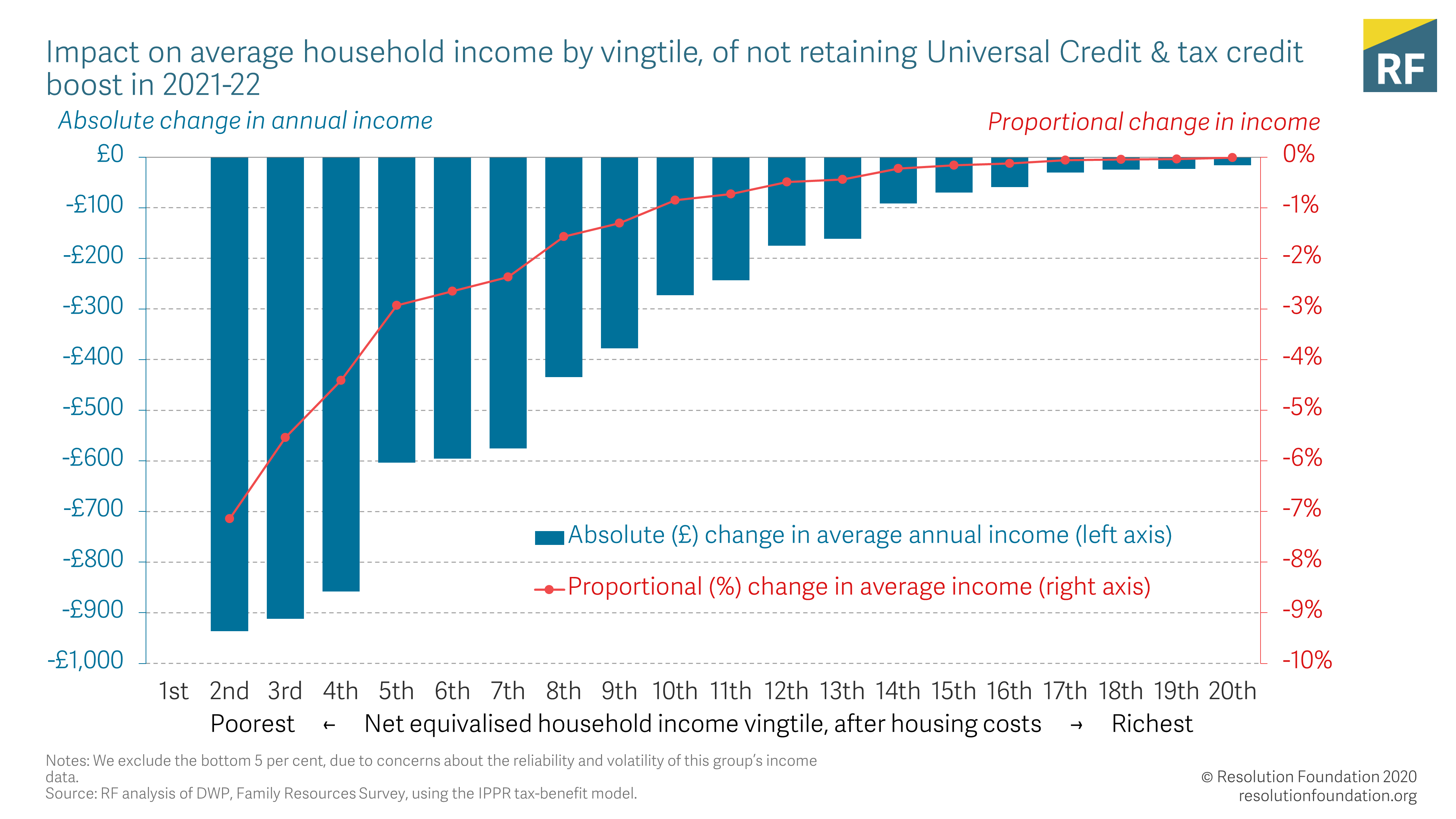 …and would disproportionately hit those living in the ‘Red Wall’

George Osborne’s attempted benefit cuts were so complicated you needed a spreadsheet to work out how much different families would lose. This time the losses for the vast majority of families will be very obvious indeed – with a flat-rate reduction of £1,000 a year in the incomes of most people receiving Universal Credit or tax credits (a further half a million or so would lose less than £1,000 a year). This fact also means it is very clear where the geographical hit will be greatest – Northern Ireland plus the ‘Red Wall’ regions across the North of England, West Midlands and Wales (see Figure 4). Indeed, you are 50 per cent more likely to lose out in the Red Wall regions than in the South East (on average Red Wall regions will see one in three non-pensioner households losing out compared to one in five in the South East).

Figure 4: In Northern Ireland and ‘Red Wall’ regions, a third of non-pensioner households will lose over £1,000 if the benefit boost is discontinued 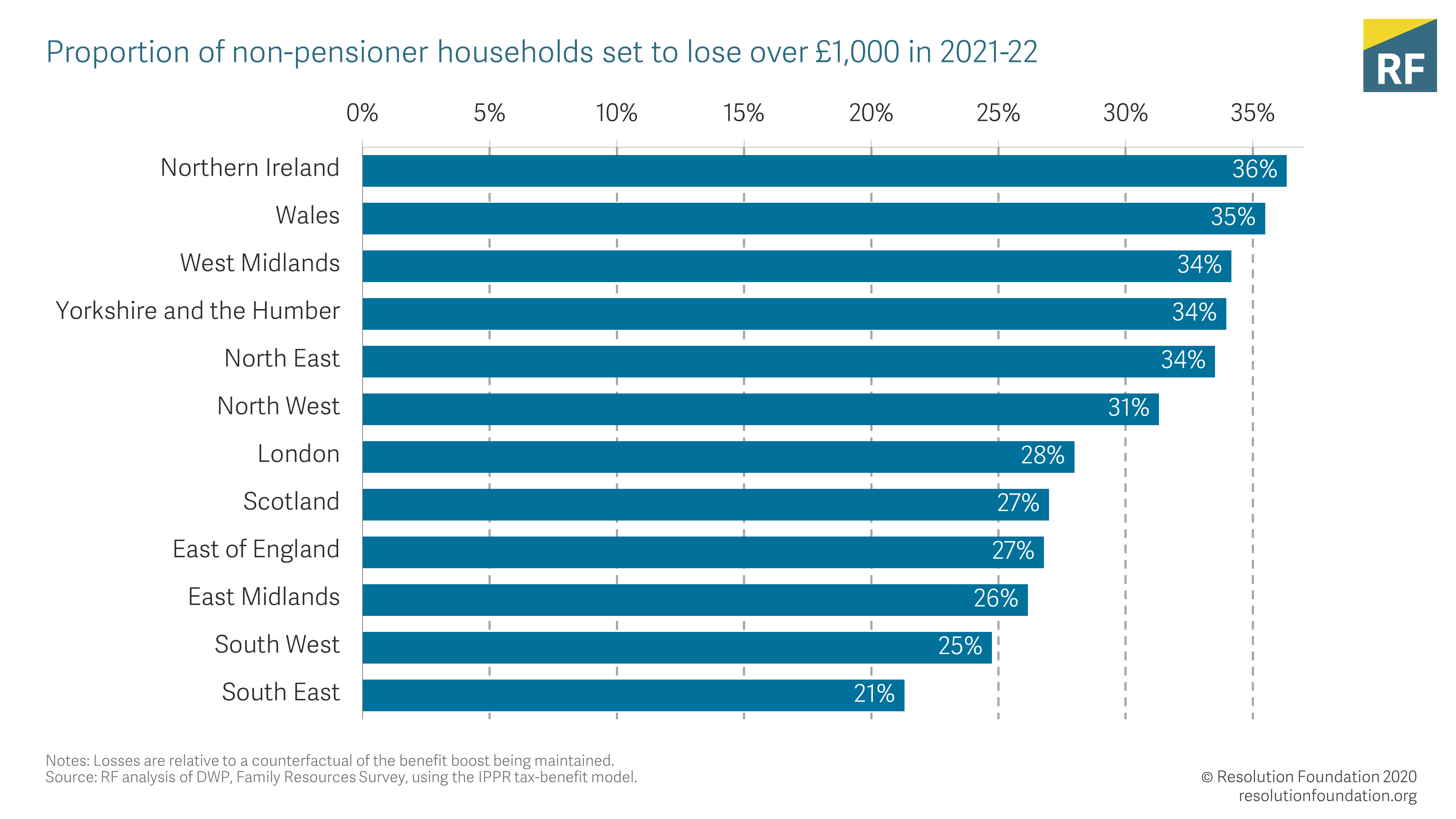 At the constituency level we can also see that in several Red Wall seats that the Conservatives won with small majorities in the last election, almost half of households look set to be affected (see Table 1). Overall, half a million working-age households in Red Wall seats will lose out (and indeed these contemporary figures may be underestimates of claimant numbers for 2021).

Table 1 : One in three working-age households in Conservative Red Wall seats will lose out from the planned benefit cut 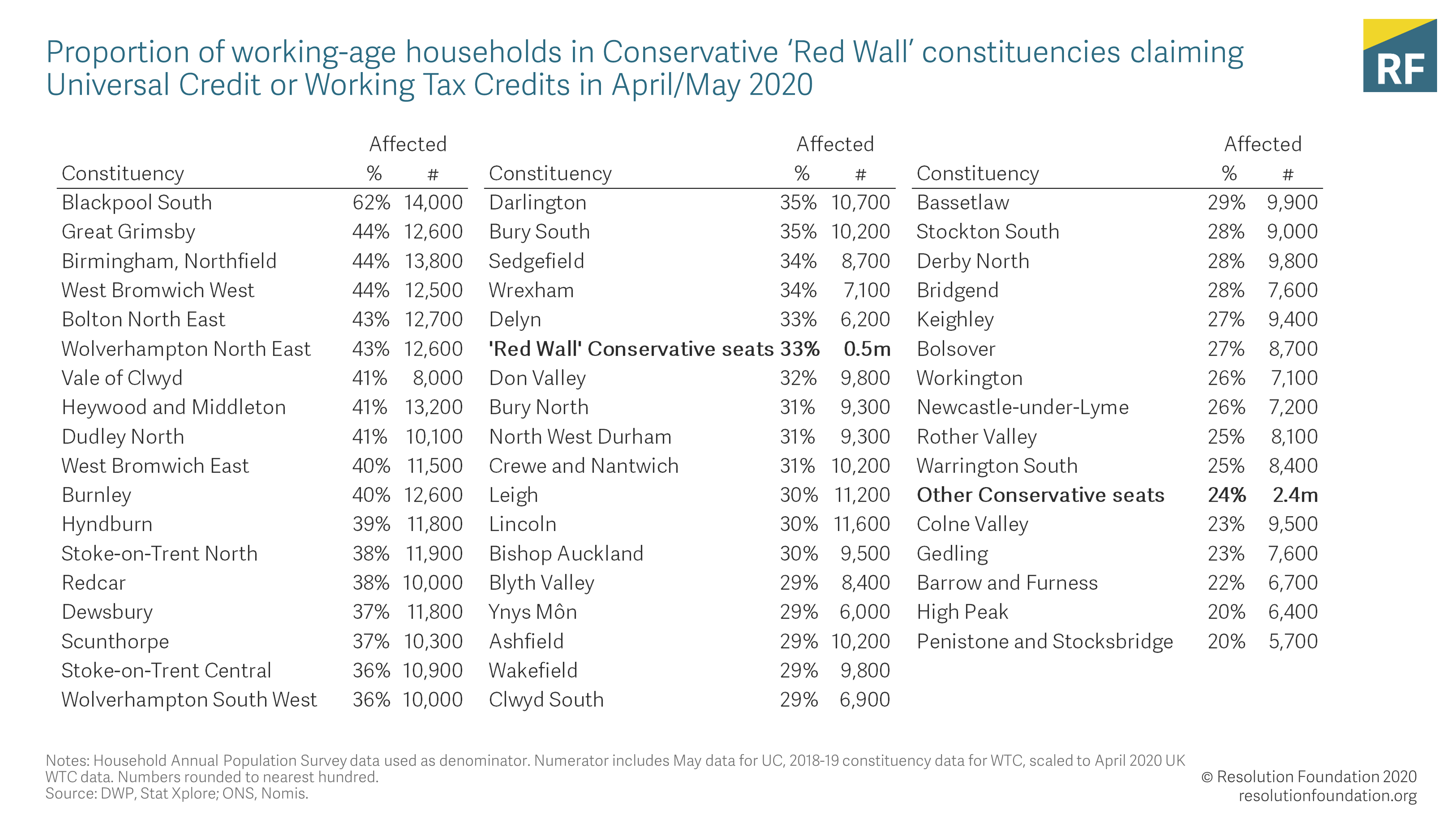 The incomes of the poorest households were growing at a decent pace back in 2015, with rising employment (particularly amongst lower-income households) giving George Osborne false hope that the income hit from major benefit cuts could be absorbed. But the years since then have been characterised by significant income falls for the lowest income households, not least as less visible welfare cuts announced by that same George Osborne have been rolled out. The result is that incomes for the poorest households (at the tenth percentile of the distribution) were 5 per cent lower in 2018-19 than in 2016-17, and no higher in 2018-19 than in 2001-02 (see Figure 5).

Figure 5: Even before the pandemic, the incomes for the poorest working-age households were no higher in 2018-19 than 2001-02 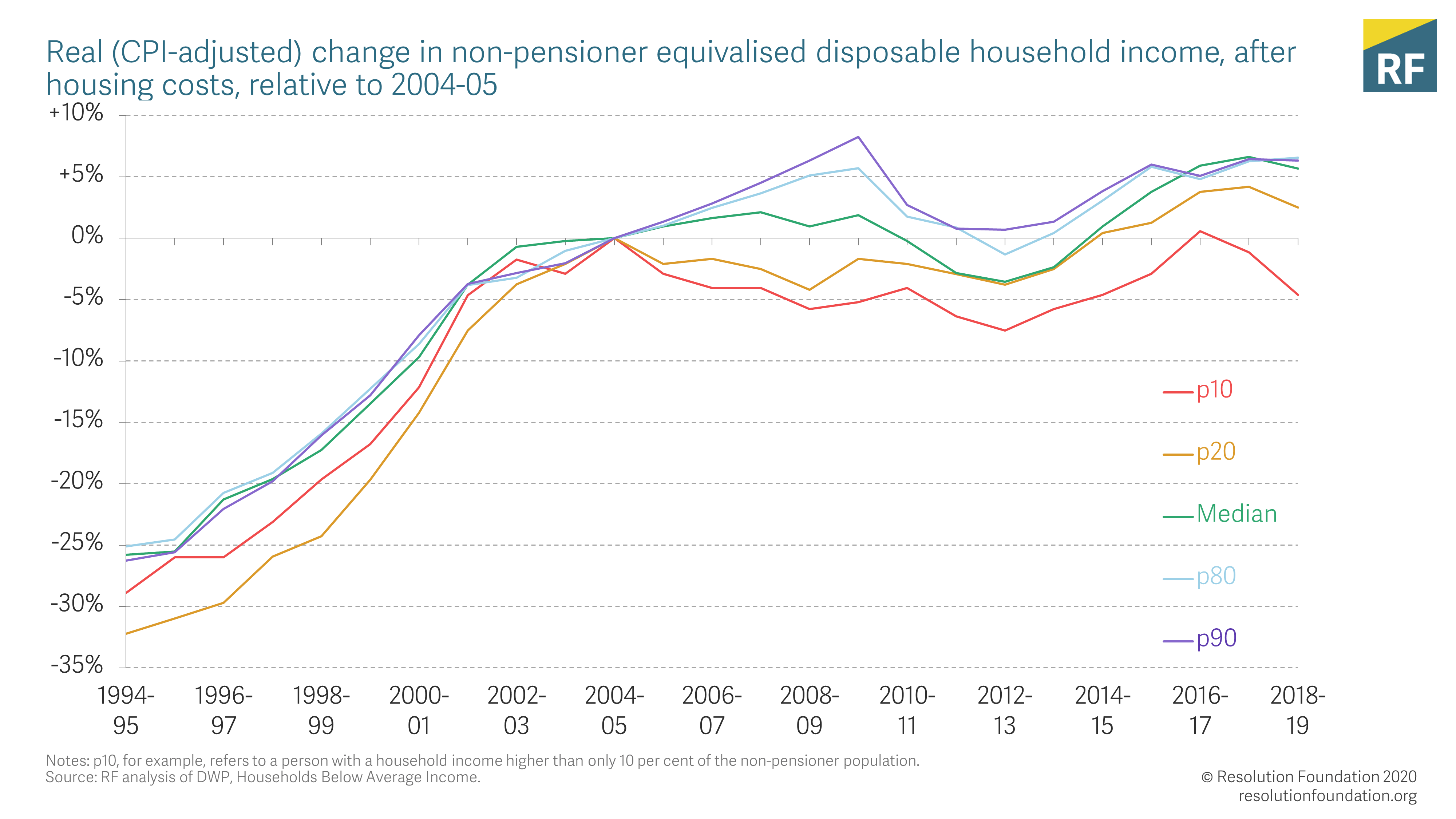 …While the immediate context makes them unimaginable

Two decades of income stagnation for low-income Britain is not the kind of backdrop into which the government should choose to deliver another huge hit to their living standards. But if stagnant incomes for lower-income Britain are the longer-term context, the immediate one is fast-rising unemployment. Between George Osborne announcing his benefit cuts in July 2015 and its planned implementation in April 2016, the employment rate rose from 73.6 to 74.4 per cent. That is not what will be happening this year, where the unemployment rate is expected to almost double (according to the Bank of England) or triple (according to the Office for Budget Responsibility) from the rate when the policy was announced (3.9 per cent in March 2020) (see Figure 6).

Figure 6: The Bank of England forecasts an unemployment rate of over 7 per cent in April 2021 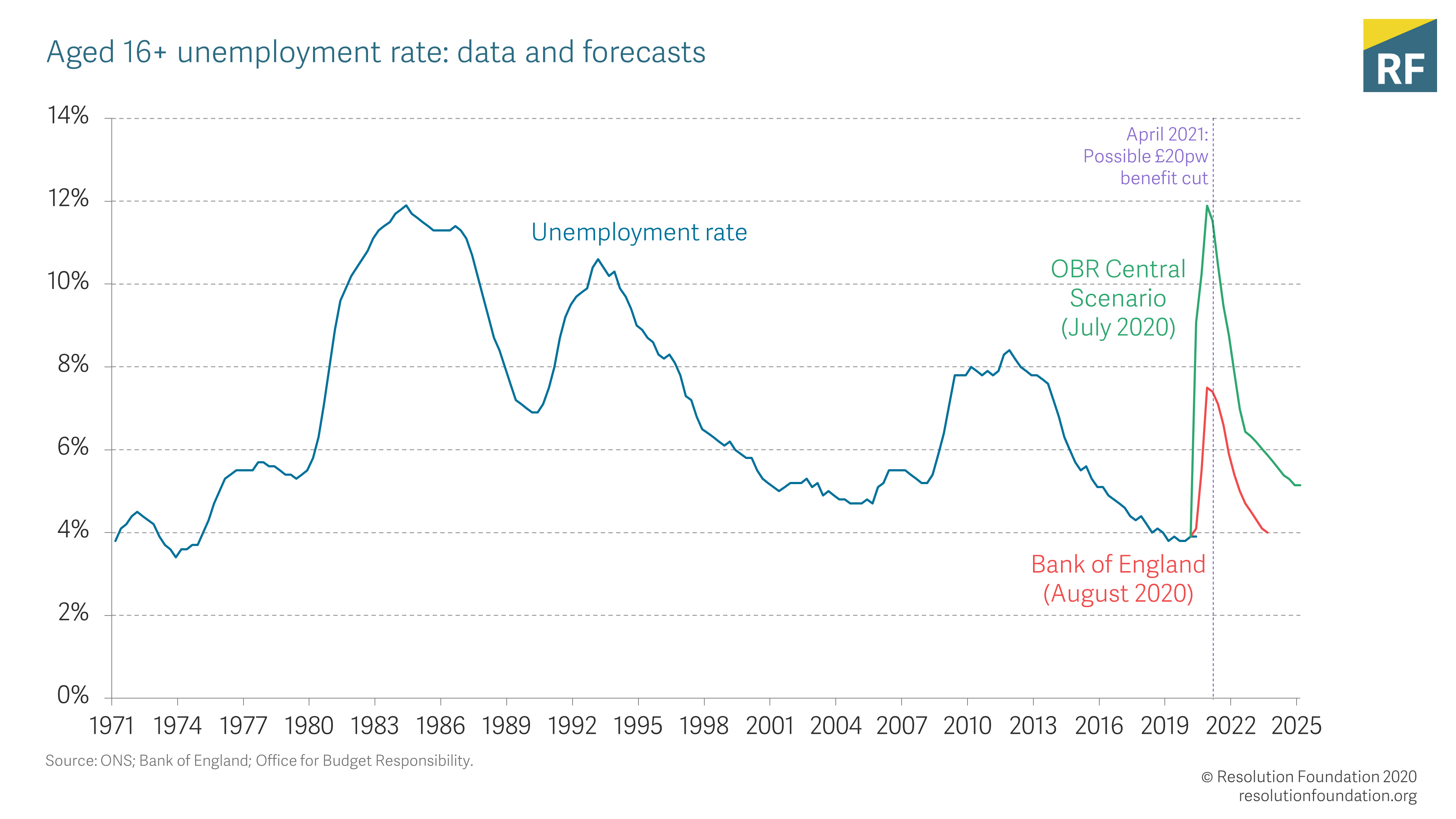 This increase in unemployment will result in a big impact on incomes due to the relatively low replacement rates of Universal Credit. For example, the median single worker without children who was furloughed under the Job Retention Scheme during the crisis would have had an income replacement rate of 83 per cent. If they now become unemployed that replacement rate falls to 30 per cent. And with next April’s cut to Universal Credit that falls even further to 23 per cent – so losing their job would mean losing over three-quarters of their income.

The case for a temporary benefit boost was the belief that this crisis would live up to the hopes of those expecting a V-shaped recovery. But with social distancing restrictions and the virus caseload now ramping up rather than down, it is clear that by April we will still be very much in the midst of this economic crisis. It is certain that unemployment will be high, and it is perfectly possible that it will still be rising. Why a government would cut unemployment benefits by over 20 per cent (and by 25 per cent for under 25s) at exactly that moment is hard to fathom.

This is bad macroeconomics

Even those who do not agree that benefit levels need to remain at the current higher level to protect individual households living standards should recognise that going ahead with cutting them next April is terrible macroeconomics. No macro-economist thinks it is a good idea to take £8 billion out of the economy at a time when, if anything, fiscal policy is already set to be pulling back prematurely from its key role in supporting demand (remember, unlike previous crisis the Bank of England cannot offset the macro impacts of fiscal policy choices by cutting rates). Doing so by reducing the incomes of our lowest-income households is particularly bad macroeconomics, given it is exactly these households who spend more of their marginal pound.

For these reasons, even those not accepting the broader arguments laid out here will recognise that at a bare minimum the Chancellor needs to delay the reduction in benefit levels at least until 2022 when it is conceivable (although very far from certain) that the fiscal consolidation could begin. Just as everyone agrees now is not the time for tax rises, it is certainly not the time for benefit cuts. A final history lesson: the Prime Minister will be for turning

The case for a U-turn by today’s Chancellor is much stronger than those that applied to his predecessor five years ago. But there are factors that contributed to George Osborne’s U-turn that do not apply today. The nature of the cut then required a full vote in the House of Commons to implement, something that is not the case today. The government also has a much larger majority today than it enjoyed in 2015.
Moreover, five years ago the Chancellor was helped out by a £27 billion windfall from the Office for Budget Responsibility that meant he could scrap the benefit cuts in his Autumn Statement without needing other spending cuts or tax rises. Today permanently higher benefit levels, which a U-turn would amount to, would almost certainly mean higher taxes in the medium term as it increases the scale of the post-crisis consolidation required.

But despite these differences, it is hard to see the Rishi Sunak proceeding with this benefit cut as currently planned. Unlike in 2015, cutting spending is not a defining purpose of this government – which has trumpeted the “end of austerity”. And unlike 2015, the Prime Minister is now Boris Johnson. That’s the same Boris Johnson who back then led the backlash against George Osborne’s cuts, arguing that the then Chancellor would need to “make sure that hard-working people on low incomes are protected”. That argument was right then, and it is all the more right now.

So the economics and the politics mean Rishi Sunak should, and probably will, follow in the U-turning footsteps of his predecessor George Osborne. History, it turns out, likes to repeat itself.