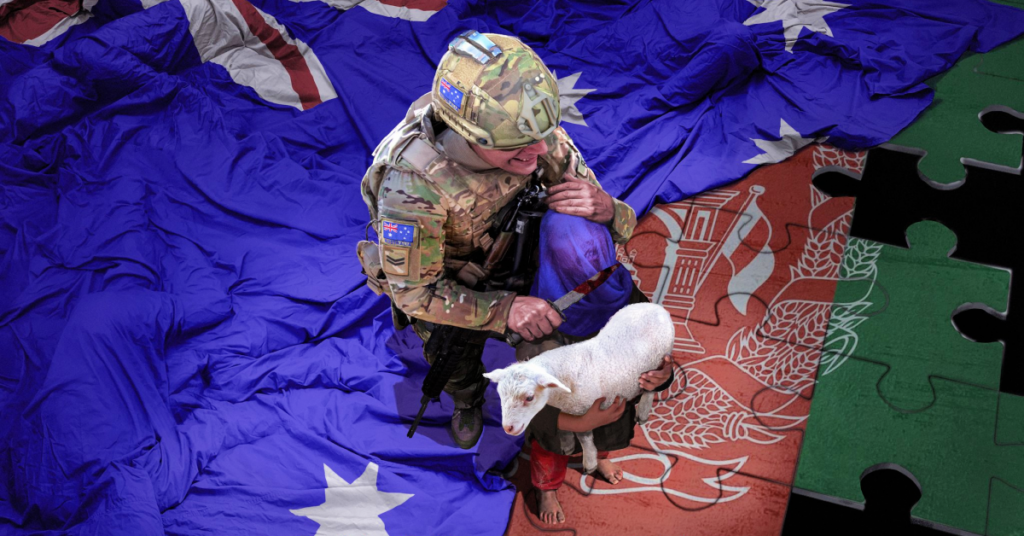 Is information inherently less trustworthy and authoritative because the source is Chinese?  It’s a question Westerners must grapple with as the US government and corporate journalists intensify their online “psychological operations” against China to manipulate public opinion in support of another Cold War (FAIR.org, 5/15/20).

The racist Orientalist trope of Chinese people being inherently dishonest and unreliable sources of information was on display in Western media’s recent campaign to vilify a Chinese official for sharing a political cartoon criticizing recently reported Australian war crimes in Afghanistan (BBC, 12/1/20). 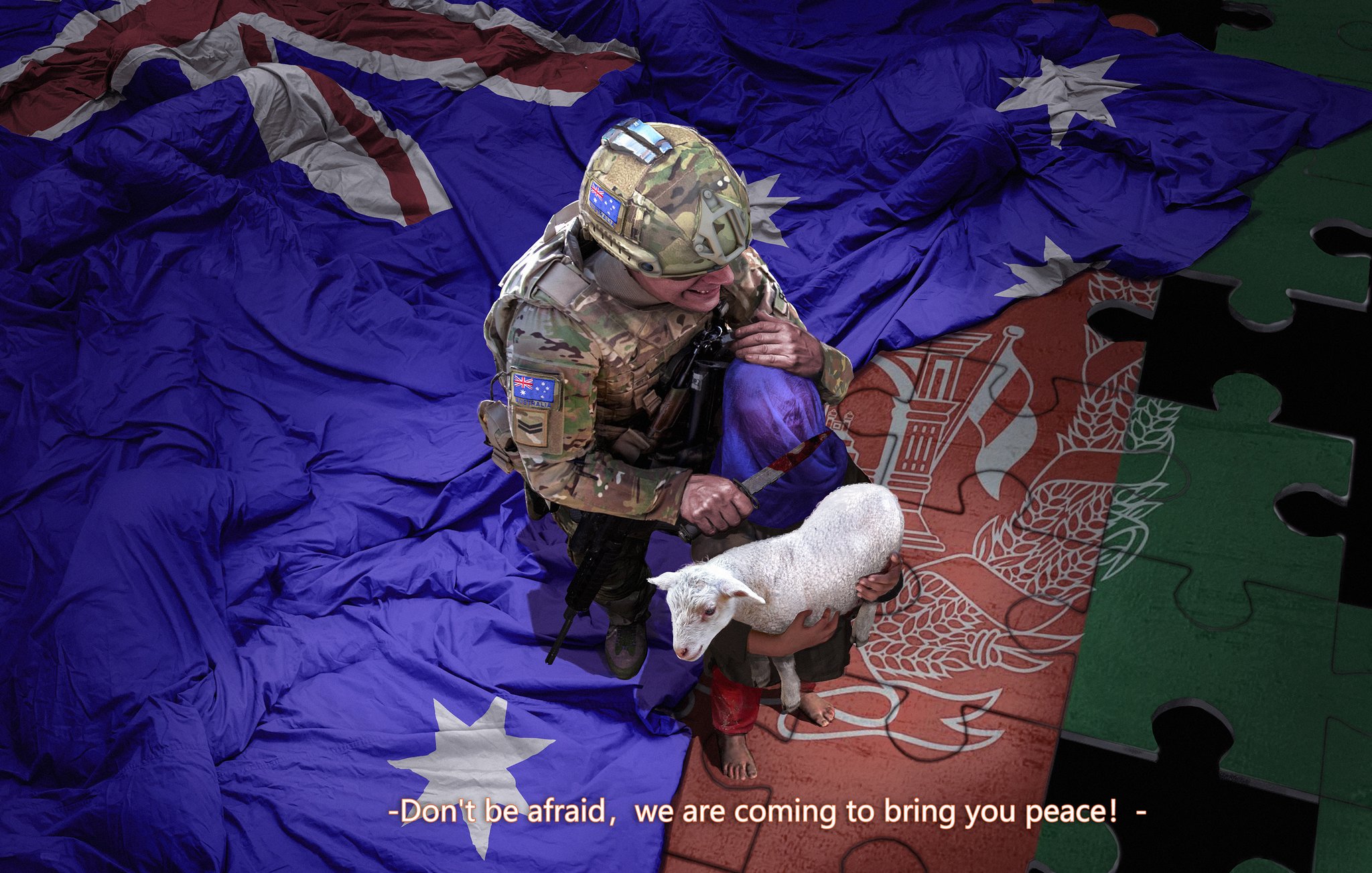 If you think that this cartoon is pretending to be a news photograph of an actual war crime, you might need to brush up on your visual literacy skills.

Chinese Foreign Ministry spokesperson Zhao Lijian forwarded on Twitter (11/29/20) a computer graphic by a Chinese graphic artist known as Wuheqilin that depicted a grinning Australian soldier holding a knife to the throat of a child while reassuring, “Don’t be afraid, we are coming to bring you peace!” The image is done in a photorealistic style but is obviously surreal: The figures are standing on a giant jigsaw puzzle, depicting the Afghan flag, which has an enormous Australian flag draped over it. The soldier is pulling the flag over the head of the child, who holds a symbolic lamb. 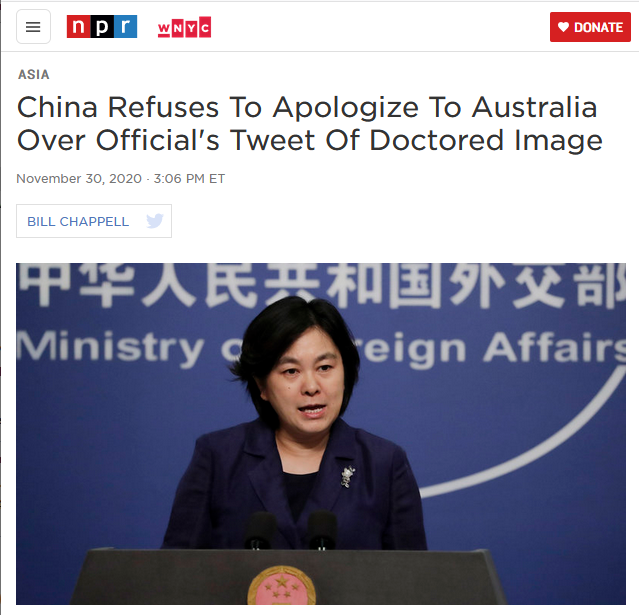 For Western media, it is the country that commits war crimes, not the one that criticizes them, that is the aggrieved party (NPR, 11/30/20).

Western media headlines reacting to Wuheqilin’s political cartoon ignored the context of real Australian war crimes, instead framing the story as a patently allegorical image being “fake” or “doctored.” The important information was not that Australia had committed war crimes in Afghanistan, but that a Chinese government official had been spreading offensive images containing false information.

Headlines exercise formidable narrative control—particularly since most readers don’t make it past them. Notice that these make the judgment on readers’ behalf that the political cartoon shared by a Chinese official is deceptive and offensive—without explaining what the content of the image is. In this nonexhaustive sample, not one headline mentions the word “Afghanistan,” and only one of them references a child being harmed. Thus these headlines manage to reverse reality by making it seem as if China is the nation that has committed a crime, not Australia! 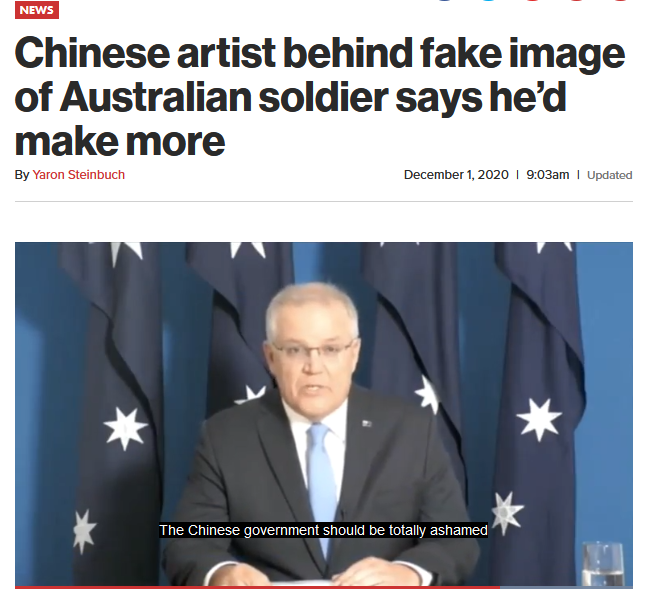 The New York Post‘s feature (12/1/20) on artist Wuheqilin was accompanied by a video of Australian Prime Minister Scott Morrison declaring that China should be ashamed to have called attention to his country’s war crimes.

But how is the image shared by the Chinese official “fake”? A revealing New York Post report, “Chinese Artist Behind Fake Image of Australian Soldier Says He’d Make More” (12/1/20), calls Wuheqilin an artist in the headline, and a “graphic artist” in the article itself, yet his work is nevertheless described as a “fake image” rather than “art,” which is what artists usually make.

The Post provided Wuheqilin’s motivation behind creating his CG illustration:

He said he had a sense of “fury and trembling” after reading reports about elite Australian troops’ “brutal killing of 39 civilians” in Afghanistan, including an unsubstantiated account about how “soldiers cut the throat of two 14-year-old Afghan teenagers with knives.”…

“I created this CG illustration based on my anger and shuddering. The artwork was simply created out of a sense of humanitarianism,” Fu wrote for the Global Times.

“I hope that more people will see this painting and pay attention to this real tragedy,” Fu said, adding that he used an Australian flag to cover some bodies of Afghan civilians behind the soldier in the image.

In other words, it is a political cartoon like any other political cartoon, and obviously isn’t meant to be taken literally. News reports are supposed to represent literal fact, yet it’s Western journalists who have been serving as dishonest sources of information by obtusely referring to allegorical artwork as a “fake image,” a “digitally fabricated image” or a “heavily manipulated image,” instead of referring to it accurately as political artwork, and putting it in context of the actual war crimes it critiques.

It’s unclear what Australia hoped to achieve with their denunciations of “fake images,” since it ironically has brought even more attention to the scandal than had it simply remained silent. Should China have published videos of Australian soldiers killing an unarmed man, or photos of them drinking beer out of a dead Taliban fighter’s prosthetic leg instead? The best way to avoid embarrassment is to simply avoid committing war crimes, yet it appears that Australia is more offended by criticism of their war crimes than the atrocities themselves.

In future instances when Western media condemn the Chinese government for sharing information critical of the West, the main question independent-minded people should ask is whether the information is true.

Joshua Cho (@JoshC0301) is a writer based in Virginia.