A few month ago we reported on documents which revealed secret British ‘Strategic Communication’ programs in support of the Jihadis who fight against the Syrian people and their government.

In December documents of a different secret program revealed similar British efforts in Lebanon. These were designed to influence certain ‘liberal’ youth groups in preparation for a ‘color revolution’ that would overthrow the Lebanese government.

A new set of documents, just recently published, shows British efforts to influence and infiltrate the security forces of Lebanon. These programs are coordinated with Canadian and U.S. efforts to gain influence in the country and to use it on behalf of Israeli interests.

Like usual these programs are sold as white man’s burden efforts to ‘help’ the indigenous people and their governments. But they are in fact undermining the sovereignty of the country and hinder the self determination of its people.

As Professor As`ad AbuKhalil remarked on the previously released batch:

To be sure, the documents seem to be unclassified material related to the operation of the British embassy in Beirut. But it can be easily ascertained that the embassy (at least from these documents, which the British ambassador in Beirut refused to comment on when asked by Lebanese media) was engaged in activities that would close the Lebanese embassy in London if it were engaged in similar activities.

It’s clear Western powers allow their embassies to do things they would never allow developing countries to do from their embassies in the West. After the humiliating defeat of Israel in Lebanon in 2006, there has been a feverish escalation of the propaganda war in Lebanon against all those who declare resistance against Israel.
…
These documents help make it clear how the West hasn’t moved on from its colonial legacy. The natives are still regarded as mobs to be controlled and manipulated.

To manipulate and gain control of the ‘mobs’ it is helpful to manipulate and control the local security services – police, military and border control. The UK set out to do that when it created its ‘Lebanon Conflict, Stability and Security Fund’ (CSSF).

In April 2019 the British Foreign and Commonwealth Office (FCO) sent invitations to a private supplier event to a few selected private companies. These were invited to bid on two projects:

The companies were asked to submit Expression of Interests for certain projects under the CSSF. They were send a summary of requirements that describe the aims of the programs and desired qualities needed to achieve these.

The above projects were build on assessments created during previous FCO projects. In 2018 one of such projects was the ‘CSSF Lebanon: CT Border Needs Assessment‘. Its objective was:

To increase UK understanding of the level of resilience at the Lebanese border to the transit of persons of CT interest. This includes FTFs, returnees and the terrorist displacement from Syria into Lebanon. The movement of goods, such as weapons, and finance these will not be the primary focus though the findings may have impact on these areas.

Note how this objective is in the interest of the UK, not necessarily Lebanon’s. While it is framed as counter terrorism project its real aim is more likely to spy on and disrupt the movement of Hizbullah forces between Syria and Lebanon and on weapon supplies from Iran to Lebanon’s Hizbullah – weapons which are needed to deter Israel from waging another war on Lebanon. 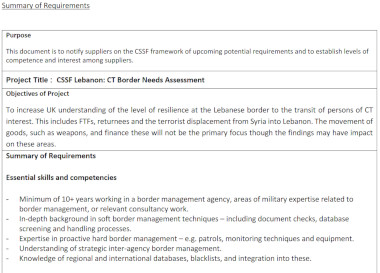 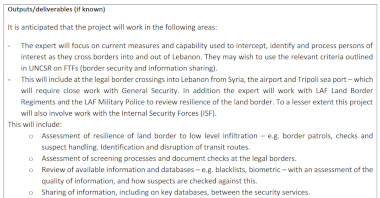 Building on assessment projects like the above larger programs to penetrate the security forces were initiated. The objectives of the CSSF Lebanon: Lebanese Armed Forces –National Security Assistance Programme are:

the provision of ‘Train & Mentor’ type interventions in support of Border Security and Internal Security, delivered at a significant scale, in Lebanon.

The ‘significant scale’ is worrisome. The budget for the above project was £20 million starting in May 2019 and running until April 2022.

The statement of requirements for the CSSF LEBANON: BRITISH POLICING SUPPORT PROGRAMME (BPSP) defines the ‘output and deliveries’ of the program as greater control by the Internal Security Forces over the population and communities of the country.

The British government promised £15 million for the project starting in August 2019 and ending in March 2022.

One of the companies that were bidding for the FCO contracts on Lebanese policing is Siren Associates. The company previously cooperated with MI6 cutout ARC described in previous leaks. The wife of the suicided founder of the White Helmets jihadi propaganda show, Sarah Le Mesurier, has previously worked for both companies.

In Jordan, our partner organization, the Jordanian Public Security Directorate (PSD), presented an approach to community policing which was partial and focused mainly on public relations, whereas effective community policing is about establishing an organisation-wide philosophy and practice. We worked closely with the PSD to develop a pilot community policing programme in refugee camps and then host communities which resulted in increased community trust and community safety. As a result of this long-term, collaborative engagement, the holistic model of community policing is now being extended by PSD throughout the organisation. When dealing with differences in approach in any future project, Siren will maintain this client-centered, listening approach.

The company has previously been on ‘scoping missions’, i.e. it spied, for the British embassy:

In March 2016, the British Embassy Amman asked Siren to respond to the Ruqban crisis on the Syria-Jordan border, in which over 70,000 Syrian refugees were stranded in significant humanitarian distress. Siren deployed a fully equipped team of four staff to conduct a scoping mission, presenting an options paper within two weeks, which led to further UK support for the Syrian populations on arrival in Azraq refugee camp.

In February 2018, the British Embassy Beirut asked Siren to conduct a rapid assessment of the security situation in Arsal, a town on Lebanon’s border with Syria only recently liberated from Daesh. Siren mobilized a team of five regional experts with relevant skills, liaised with the Internal Security Forces(ISF), gained security permissions, travelled to Arsal with the regional police commander, conducted the scoping exercise and drafted the report. The report, described by the Embassy as ‘very interesting and extensive,’ was delivered within ten days.

The company has operated in Lebanon since 2008. It is already deeply embedded in Lebanon’s security forces and coordinates this with other Five-Eyes-countries:

The objective of Siren’s justice and security institutions relationship management strategy is to maintain buy-in to activities that cross-cut the security and justice sector and capitalize on any potential synergies between ongoing and forthcoming projects in the security sector. Key actors will be addressed as follows:

Lebanese Armed Forces (LAF): Current Siren projects in Tripoli have allowed us to foster linkages with Army command in Tripoli, with whom MARCH has active community engagement activities. Siren will work closely with the CSSF LAF programme supplier to align programming and benefit from community engagement.

Municipal Police (MP): Siren will capitalize on complementarities identified in meetings with Canadian Embassy representatives between this programme and the Canadian-funded UNDP programme in order to enhance MoIM’s comprehensive response to safety and security needs. This will include consulting Tripoli Municipal Police when designing community engagement activities.

Ministry of Justice: Siren has proven capability to work cross-ministerially: Siren is currently implementing a project that works across the MoIM and Ministry of Justice (MoJ) to pilot an improved registration process for stateless persons and is working directly with the Cases Commission. The Ministry is supportive of initiatives that improve judicial processes; Siren will build on this relationship in the forthcoming programme.

SSR Implementers: Siren has begun coordinating with the US Implementation Team regarding their major ISF automation project to ensure that any systems deployed are interoperable with systems developed in the Police of Beirut and that any technological transitions are managed effectively in order to maintain ISF operational capabilities. Siren has and will remain an active participant in relevant donor coordination functions, including the Canadian organized CT Working Group on Prisons. Siren is currently implementing a project on behalf of DCAF in the ISF Public Relations Department and is in discussions with DCAF regarding further support to the Anti-Torture Committee; these synergies can be leveraged with proposed activities within this programme. 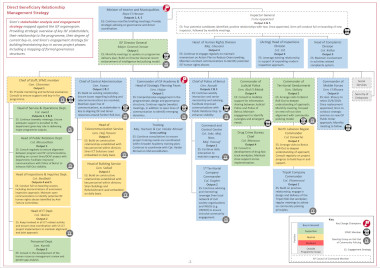 Another company that submitted its credentials to bid for the British program to undermine Lebanese security forces is the British Torchlight Group. It has been working in Lebanon sine 2015. It has hired the former Brigadier General of the Lebanese army Bassam Boutros and others as ‘senior strategic advisor’ to peddle its influence. The former generals are budgeted with more than £100,000 each for 120 days work on the project. They are used to open the doors to other high level contacts:

Working across the security agencies and with civilian host government stakeholders:

Lebanon is a relatively top-down environment, and one where seniority matters. Our team members have access to and good relationships with the current DGs of the ISF and GS, as well as senior officials in the LAF. We will continue the existing relationship with General Othman through our Strategic Police Advisor, while at the same time cultivating close relationships with the second tier of leaders and with commanders at regional and local levels.

Our international team is supported by well-regarded retired senior ISF officer, Gen (rtd) Joseph Douaihy, who as a former leader in the Territorial Gendarmerie has a close understanding of ISF relations outside Beirut. To help us foster coordination with other agencies, LAF Gen (rtd) Bassam Boutrous and GS Gen (rtd) Dany Faresbring the team extensive experience of inter agency coordination on border management and other issues, and will help us navigate the bureaucracy and political landscape of the SSAs as well as enabling access to leadership cadres in the agencies and related ministries. All our meetings with senior officers are recorded in Key Leader Engagement (KLE) reports and shared with the Authority to ensure coherence of message between operational and policy levels.

Reread the last sentence and guess who ‘the Authority’ is to which the reports of the ‘Key Leader Engagement’ meetings are handed.

The described projects show how deep British MI6 cutouts have already infiltrated Lebanon’s security services. They bribed or otherwise convinced the Lebanese security leadership to allow that their infiltration projects can proceed even deeper deeper into its services. All this while working for and reporting to a foreign ‘Authority’ which  certainly does not have Lebanon’s best interests in mind.