Why do we eat what we do? This is the question Chris Otter seeks to answer in Diet for a Large Planet. It is very timely. In recent years there has been growing anger and horror at a food system that delivers both unhealthy and environmentally destructive diets. Food has become deeply politicized.

In 2019 the medical journal The Lancet published what it called a “planetary health diet.” Their conclusion was that “the world’s diets must change dramatically” to save the planet and ourselves. They argued that a Great Food Transformation is required — a move away from what is often called the Western Diet, high in red meat, refined grains, saturated fat and sugar, to a more plant based diet.

This is not in fact a new argument. Otter’s title deliberately echoes Diet for a Small Planet, first published 50 years ago, in which Frances Moore Lappe blamed a diet rich in meat and refined carbohydrates for environmental and health problems. 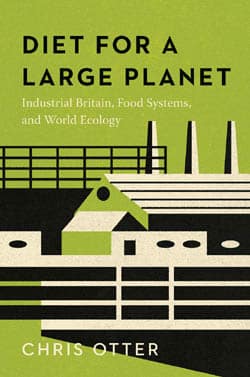 But when looking at today’s food systems most commentators tend to focus on the post war period, and in particular the role of the US in driving a model of industrialized food production and agriculture. This is a model epitomized by the ascendancy of processed foods, the growth of the fast food giants and supermarkets, and the scale and dominance of agribusiness.

However, Otter argues that “in order to understand the deeper history of today’s global food situation, it is necessary to explore post-1800 Britain.” He argues that “Britain laid the foundations for contemporary food systems. It was the nineteenth century’s dominant world power, controlling immense global resources, and creating long distance food chains to supply vast quantities of meat, wheat and sugar.” This is a good starting point. Locating our current food systems in a wider political and historical context, very much bound up with the development of capitalism and colonialism.

What stands out in the book is just how early the internationalization of food production developed for Britain. Britain was sourcing foods from round the globe in vast quantities from the mid 1800s, importing grain, meat and dairy products.

Otter shows this with a vast array of statistics. He outlines how “the volume of British food imports rose almost eightfold between 1850-52 and 1910-12, by which time they represented around two fifths of all British imports by value. Over four fifths of bread consumed in Britain came from imported grain by 1909.”

Initially Ireland had contributed much of Britain’s imports of grain, meat, butter and livestock but Britain soon became the world’s richest single consumer market for food and raw materials. In 1860 Britain received 49% of total Asian, African, and Latin American food exports. In 1930 with just under 3% of the world’s population Britain imported 99% of world’s exports of ham and bacon, 63% of its butter, 62% of its eggs, 59% of its beef, 46% of cheese, and 28% of its wheat and wheat flour.

Otter looks in detail at how Britain came to import so much meat, grain and sugar. For example, during the 1800s farmers in Britain had experimented with selective breeding to produce the cows and other animals ideal for meat production, such as short horn cows and Herefords. It soon became more profitable to ship these types of livestock out to new areas of the globe, such as the United States and Argentina, to be bred and reared on their huge pastures and their meat imported back to Britain.

Such outsourcing, as Otter calls it, meant a vast infrastructure was built in these areas. As he outlines “there were nearly 70 million cattle in the US by the early 1930s. This heavily capitalized industry with its vast ranches and industrialized meat packing, operated on a much larger scale than Britain’s.” It’s not hard to see how this paved the way for the great acceleration of meat production after 1945 in the US.

There was a massive increase in the amount of wheat bread consumed in Britain between 1771-1879, and by 1911 wheat bread provided around half the working class calorie intake.

Otter outlines how Britain had been self-sufficient in wheat until about 1850. However, at that point wheat production started to become unprofitable and so grain began to be drawn from different and shifting areas of the globe, including Australia, India, Argentina and North America. By 1909 over 80% of British bread was made with imported grain.

Alongside meat and bread, sugar also became central to the British diet. In a short period of time it went from being a luxury to an essential. Otter makes the point that it became a cheap “fuel food” for the working class in Britain. By the late eighteenth century Britain consumed nearly half of all the sugar reaching Europe, and British consumption levels were over ten times higher than those in the rest of Europe. In 1750, the average Britain received 72 calories daily from sugar, by 1909-13 this figure was 395. Sugar still provides 12-15% of Britain’s calories.

Such cheap calories were a consequence of colonialism and slavery. Portuguese, Spanish, French and British colonial systems created a sugar industry linking Europe to the Caribbean and parts of South America. For Britain Barbados became particularly lucrative, with sugar becoming the island’s most important export by 1650. Jamaica was colonized from 1664, and by 1805, it was the world’s largest sugar exporter. By the 1830s Britain was using some two million overseas acres for sugar production.

Alongside exploring the internationalization of food production, Otter also shows how mass production techniques and food processing are not just a postwar invention. For example, the mass production of bread began in the 1870s. Traditional milling methods in Hungary and the US were replaced by roller milling and then introduced into Britain. It is fascinating to note that factory made American cheese was already cheaper than British cheddar in the 1860s — and arrived in Britain in increasing quantities. Mass production techniques meant that Britain was producing some 300,000 tons of biscuits by 1939 while sweets we know today such as fruit pastilles and fruit gums have been industrially produced since the late 1800s.

However, Otter seems to argue that this internationalization of food production or outsourcing was a consequence of what he terms a “large planet philosophy.” He defines this as “the premise that the entire earth was a potential source of material wealth and capital investments.”

The implication throughout the book is that the idea of sourcing food from across the globe was the driving force behind the developments rather than the dynamics of capitalism. Here the book is at its weakest. While Otter references Marxism in his introduction as a framework he will draw on, there is virtually no discussion of how the development of capitalism turned food into a commodity. There is nothing about how the competitive accumulation and the drive for profit at the heart of capitalism impacted on food production, including its expansion across the globe.

As Martin Empson points out in Land and Labour, “Marx understood how the development of industrial capitalism in one part of the world had the effect of shaping the agricultural economies of the rest of the world.”

In Capital, Marx writes that, “large scale industry, in all countries where it has taken root, spurs on rapid increases in emigration and the colonization of foreign lands, which are thereby converted into settlements for growing raw material of the mother country…. A new and international division of labour springs up, one suited to the requirements of the main industrial countries, and it converts one part of the globe into a chiefly agricultural field of production for supplying the other part, which remains a pre-eminently industrial field.”

Diet for a Large Planet often reads almost as a summary of political thought and as though food production was shaped by a battle of ideas. Of course there were competing ideas, for example over free trade, a requirement that underpinned cheap food imports. But these reflected real class interests, as well as divisions within the ruling class themselves. The battle over the Corn Laws of 1815 exemplified this — with the established landowning class wanting to keep grain prices high while the rising class of industrialist capitalists wanted cheaper grain, so they could pay their workers less.

Without such a framework of understanding the dynamic of capitalism, the drive for profit at the heart of it and how different class forces asserted themselves, the central arguments the book seeks to make are weakened.

While Otter makes some interesting points about food, power and racism, he downplays the centrality of slavery to the development of capitalism. And although he explores the Irish and Bengal famines he doesn’t emphasize the fact that food was exported from these countries during those famines.

The book contains a wealth of detail and a vast array of facts and figures, covering everything from imports to the size of working class kitchens, from animal slaughter techniques to historical records of calorific intake and tooth decay, from the working of grain elevators to the specifics of the sugar extraction process and beet production, and much more. This makes the book a useful resource, but at times I felt that the detail drowned out the big picture and obscured explanation and analysis.

Overall, Diet for a Large Planet is a useful, and at times thought provoking, contribution to the discussion of food systems, but I finished it with unanswered questions.