[It’s now indisputable that the Tochka-U missile was not only fired by the Ukrainians at the Kramatorsk Railway terminal but that it was one of a series fired by Ukraine (including at Bucha) as the serial numbers found on the missiles are part of a sequence possessed only by the Ukrainian Armed Forces! But crucially, when are the corporate/state media going to tell the truth about the fact that the Ukrainian government slaughtered its own people in order to incriminate the Russians?! WB]

🇷🇺🇺🇦 The rocket that hit Kramatorsk yesterday is not just Ukrainian.

The first photo shows the serial number of one of the Tochka-U missiles that flew yesterday to Kramatorsk and was shot down. The one on which it was written “For the children.”

On the second is the serial number of Tochka-U, which hit the settlement on February 2, 2015. Alchevsk (LNR).

This is yet another irrefutable proof that it was Ukraine that struck Kramatorsk yesterday.

This is a follow on to yesterday’s Tochka-U missile strike on the Kramatorsk railway station. Russia no longer has Tochka missiles while the Ukraine, Belarus and several other states still use them.

There is now additional evidence that the missile was fired by Ukrainian forces. The facts do not matter in ‘western’ media who stick to whatever story they are told to produce. Still, I do believe that facts matter at least in the long term and that there is a historic value in documenting them.

The Tochka-U is a tactical missile with a maximum range of some 120 kilometer. It is typically fired from a transporter, erector, launcher vehicle (TEL) with little need of preparations.

The TEL vehicle for the Tochka is a six wheeled BAZ 5921 /5922. These are amphibious floating hull chassis. The picture below shows a BAZ TEL in parade mode with a Tochka missile slightly erected.  In the normal transport mode the missile lies horizontally under a protective roof. 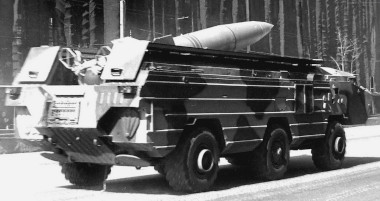 There were several claims of such vehicles being seen in Belarus or with Russian forces in Ukraine. But not every six wheeled BAZ vehicle can be said to be a Tochka missile TEL or Tochka transporter. There are various look alike variants of the vehicle with radar or communication equipment or simply used as transporters or ferries for all kind of goods. 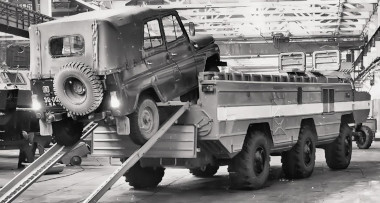 The Tochka missile, below in a firing position, consists of a rocket engine, four fins and grids to direct its course, a solid fuel compartment and a warhead. A complete missile weighs about 2,000 kilogram. 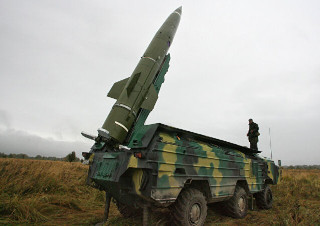 There are various warhead types available which weigh about 500 kilogram each.

The warhead which was used in Kramatorsk is a fragmentation one with 20 sub-munitions (gray) each with some 7.5 kilogram of explosives. 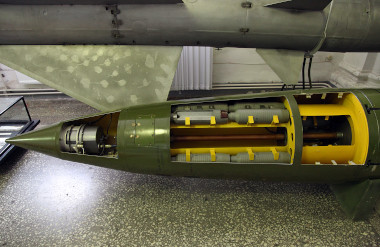 These sub-munitions get expelled and explode while still in the air and each one creates some 800 fragments. The warhead thus leaves no hole in the ground but expels a huge number of deadly metal fragments at high speed over a relative large area. The Tochka missiles are not very precise. They have a circular error probability (CEP) of some 150 meters. They are so called area weapons to be used against concentrations of infantry or unarmored vehicles.

Which brings us to the scene in Kramatorsk. Several pictures from the scene show the booster section of the missile. 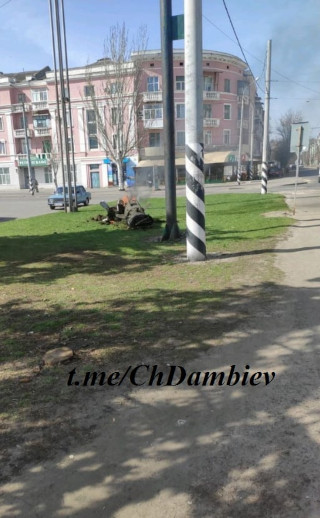 The location of the booster debris and where the explosion happened allows one to point out the trajectory from where the missile was fired. I have checked the locations depicted below and found them to be correct. 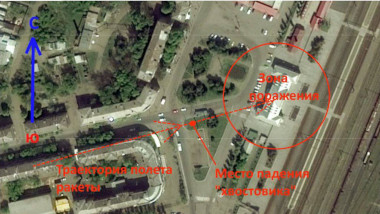 North is to the top. The station is encircled and the point is where the booster section landed. The arrow shows the trajectory the missile must have taken.

Oh, the map is annotated in Russian and you don’t trust Russian sources? Well, here is the New York Times posting a similar map. 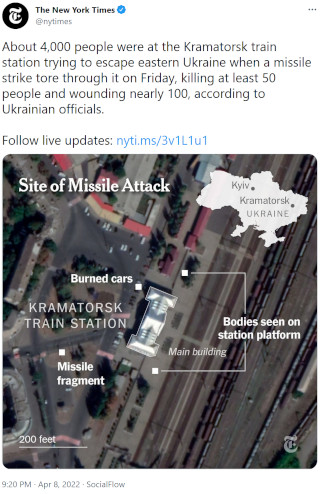 Here is map from Liveuamap depicting the current front lines in Ukraine. Kramatorsk is marked in yellow. 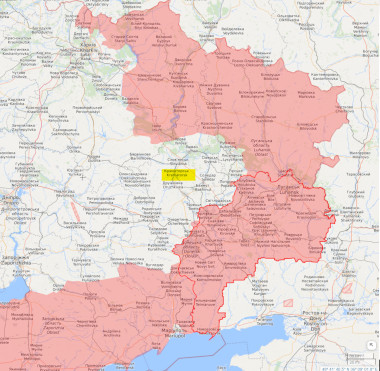 Note that there are no Russian or Russia-aligned forces west-southwest of Kramatorsk within the 120 km maximum range of a Tochka missile. The missile must have been fired by Ukrainian forces.

Unsurprisingly the Russian military has come to the same conclusion:

An analysis of the engagement radius of the warhead, as well as the characteristic position of Tochka-U missile’s tail section, clearly confirm that it was launched from a south-western direction away from Kramatorsk.

According to intelligence reports, one of the divisions of the 19th Missile Brigade armed with Tochka-U missile systems at the time of the strike on Kramatorsk was located near Dobropol’e in Donetsk Region, 45 km south-west of Kramatorsk.

This area is still under the full control of the Ukrainian military grouping troops in Donbass.

The publicly available evidence shows that the Ukrainian military must have fired the missile that killed some 50 Ukrainian civilians in Kramatorsk.

The only purpose of the attack I can think of was to create propaganda that, when distributed as ‘Russian attack’ through ‘western’ media, will create more military support for Ukraine.

Everyone who urges to give more arms to the Ukraine or who eggs it on to continue this war is guilty of creating impetus for more incidents like the one seen in Kramatorsk.