With no national force with the vision and power to offer an emancipatory alternative to politics that turns neighbors against each other, the country is on a knife edge. 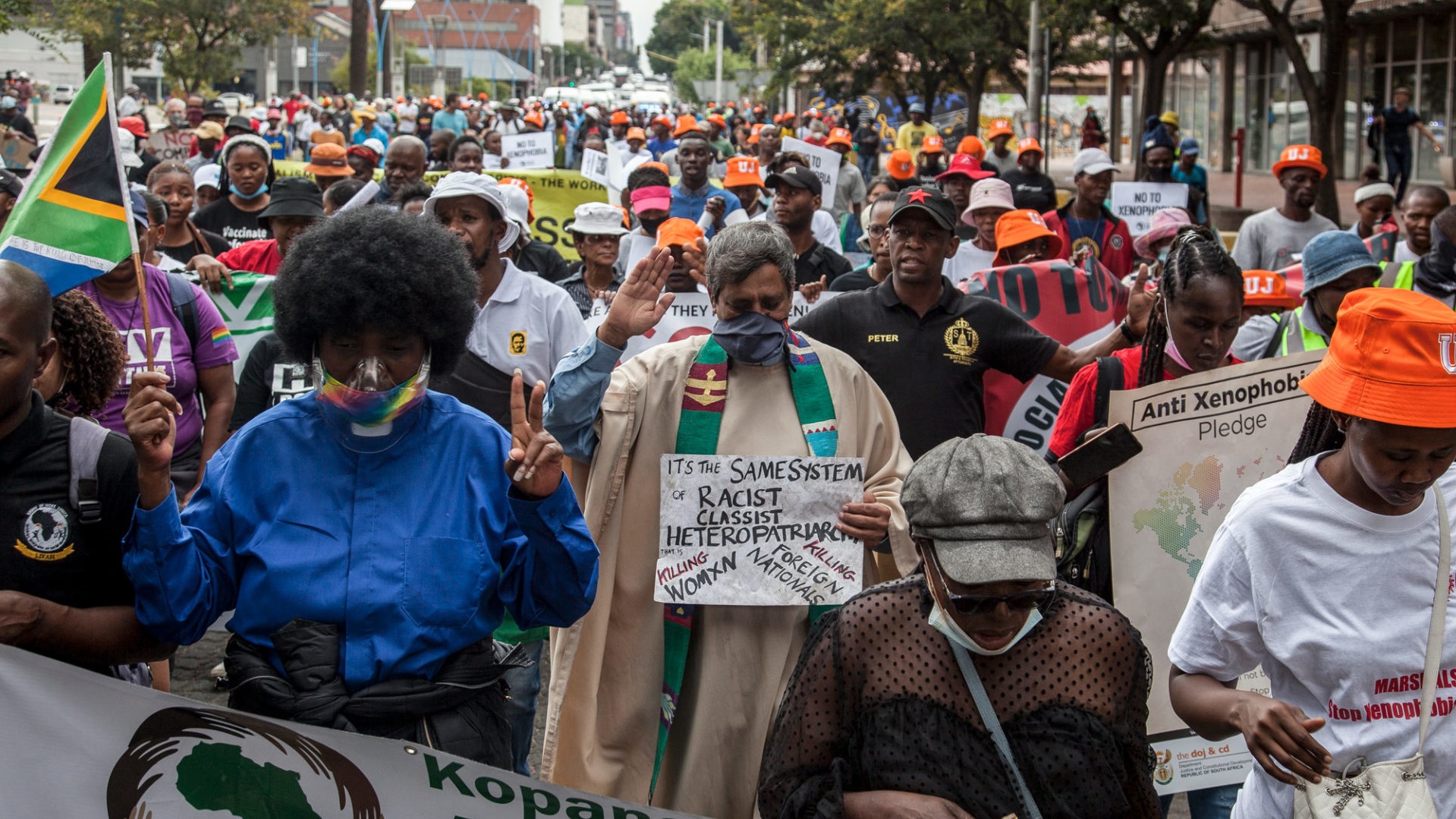 Members and supporters of a coalition of organizations under the banner of Kopanang Africa march against xenophobia in Johannesburg in March 2022. Photo: Gopolang Ledwaba

Xenophobia is a global crisis, but in South Africa, it takes a particularly violent form. The day-to-day accumulation of insult and harassment from within the state and society periodically mutates into open-street violence in which people are beaten, hacked and burned to death. If there is a useful point of global comparison, it may be with the communal riots that rip Indian cities apart from time to time.

The state has tended to stand down while a neighborhood is roiled with xenophobic violence. When it does move in, after the destruction, removal of people from their homes and killing have stopped, it usually arrives to arrest migrants rather than the perpetrators of the attacks. It is overwhelmingly impoverished and working-class African and Asian migrants who must face this pincer movement from the mob and the police.

The severity of the situation in South Africa first came to global attention in May 2008 when xenophobic violence, sometimes intersecting with ethnic sentiment, took 62 lives. At the time, the country was ruled by Thabo Mbeki, a man with deep and genuine Pan-African commitments. But by the end of 2007, Jacob Zuma’s path to the presidency was clear, and the ethnic chauvinism he had introduced into the public sphere was rampant. The limited social support offered by the state was increasingly understood to be tied to identities such as ethnicity, nationality and claims to be part of long-established communities.

By the time that Zuma took the presidency in May 2009, it was common for party officials in his home province of KwaZulu-Natal to tell impoverished people that they had not received houses, or other entitlements, because of an “influx” of “foreigners” or people “from other provinces”—a euphemism for ethnic identity. There were cases where people, seeking the approval of political authority, began to “clean” their communities themselves.

Now, almost 15 years since the 2008 attacks, the situation is much worse. Most South Africans have lived in a state of permanent crisis since the colonial capture of land, cattle, and autonomy. But for most young people, that permanent crisis no longer takes the form of the ruthless exploitation of labor under racial capitalism. Last year, youth unemployment hit 77.4 percent, the highest out of all G20 countries. As Achille Mbembe, the Cameroonian philosopher who writes from Johannesburg, argued in 2011, the intersection of race and capitalism has rendered people as “waste.”

The pain of young lives lived in permanent suspension is often turned inward. There is a massive heroin epidemic, depression and anxiety are pervasive, and rates of violence, much of it gendered, are terrifying.

In this crisis of sustained social abandonment, there are attempts, sometimes extraordinarily courageous, to build forms of politics around the affirmation of human dignity. They have often met serious repression, including assassination. But unsurprisingly, there are also attempts to build forms of popular politics around xenophobia, some of them with fascistic elements. Young people, mostly men, are summoned to the authority of a demagogic leader, given a rudimentary uniform in the form of a T-shirt and the opportunity to exercize some power in the name of “cleaning” society. Perversity is dressed up as virtue.

At the same time, all the major political parties, including the ruling African National Congress (ANC), have moved sharply to the right and have become increasingly xenophobic. In government, the ANC has always run a highly exclusionary migration regime and is now moving to end the permits, established more than 10 years ago, that gave around 178,000 Zimbabweans the right to live, work and study in South Africa.

Its rhetoric has also moved sharply to the right. The party’s spokesperson, Pule Mabe, recently declared “open season on all illegal foreign nationals,” adding, “we can no longer guarantee their safety.” The party’s policy conference in early August proposed “a well-coordinated strategy for tracking down illegal foreigners.” That strategy explicitly included the recommendation that “ANC branches must take the lead in this regard.”

Many analysts take the view that the ANC, which has already lost control of many of South Africa’s major cities, will not be able to win the next national election in 2024. As the party faces the prospect of losing power for the first time since the end of apartheid, the temptation to scapegoat migrants for its failures is escalating. Alarmingly, the new parties taking the political space opened by the rapid decline in support for the ANC are more or less uniformly forms of authoritarian populism centrally organized around xenophobia.

Former business mogul turned politician Herman Mashaba’s ActionSA party, which is making rapid electoral advances, mixes hardcore neoliberalism with xenophobia. In 2018, Mashaba staged a “citizen’s arrest” of a migrant and then tweeted, “We are [not] going to sit back and allow people like you to bring us Ebolas in the name of small business. Health of our people first. Our health facilities are already stretched to the limit.” This conflation of a vulnerable minority with disease evokes the horrors of historical forms of fascist mobilization.

Public speech from the state, government and most political parties routinely conflates documented and undocumented migrants as “illegal foreigners,” “illegal foreigners” with criminals, and, in recent days, following a horrific gang rape on the outskirts of a decaying mining town, rapists. When the police come under pressure to respond to concern about criminality, they frequently arrest migrants, often including people with papers rather than perpetrators of actual crimes.

The mass-based organizations of the left, with political identities rooted, to a significant extent, in the factory, the mine or the land occupation have often opposed the turn to xenophobia, and it is common for migrants to hold positions of leadership in these kinds of organizations. But while they can provide nodes of refuge, they lack the power to effectively oppose the rapidly worsening situation at the national level.

With no national force with the vision and power to offer an emancipatory alternative to the poisonous politics, sometimes with fascist elements, that turns neighbors against each other, the country is on a knife edge.

Richard Pithouse is an academic and journalist in South Africa. He is the coordinator of the Johannesburg, South Africa, office of Tricontinental: Institute for Social Research; the director of the Forge, a cultural space; and the editor-at-large of Inkani Books.

This article was produced by Globetrotter.