Washington has only itself to blame for growing de-dollarization trend 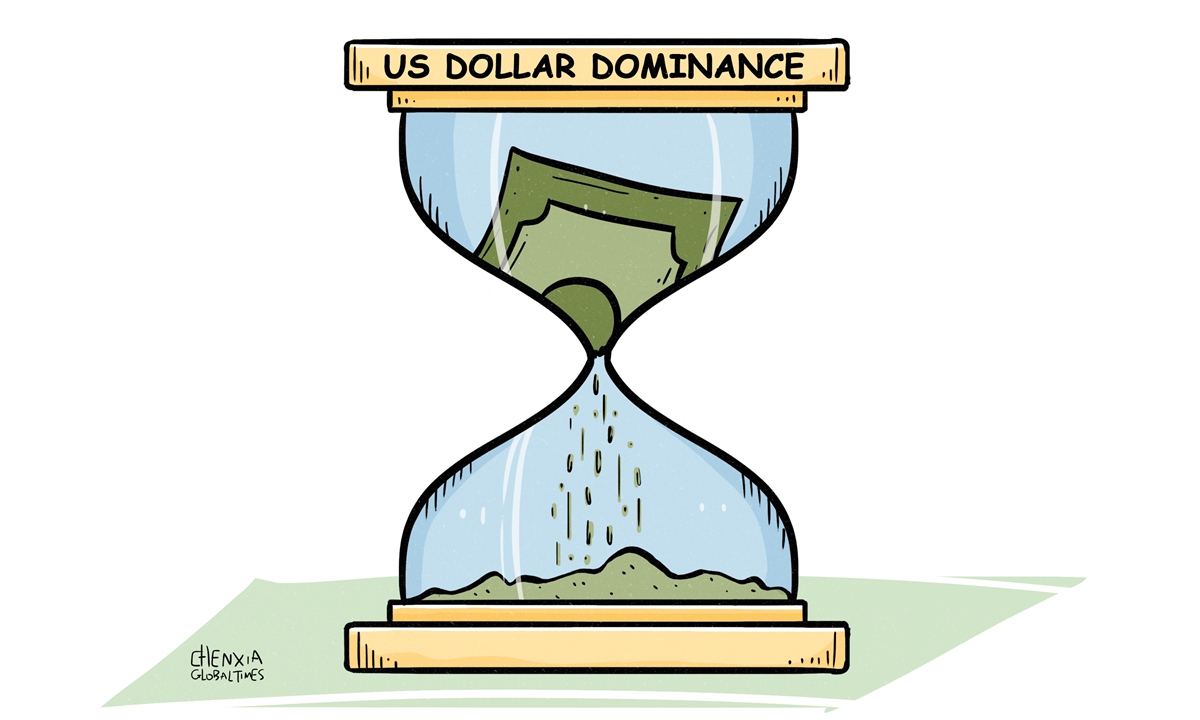 After the breakout of the Russia-Ukraine conflict early this year, US-led Western governments imposed a raft of sweeping financial sanctions on Moscow including freezing its foreign exchange reserves. The thought the US may move to grab anybody’s assets who refuses to obey Washington’s dictates is truly unnerving, which is now inducing more countries to diversify their reserve assets away from US dollars.

There exists another important factor driving more countries to push for a quicker pace of de-dollarization. The US Federal Reserve, led by egoism, only cares for America’s and Wall Street investors’ interests, and the American central bank has in the past years frequently bungled on its monetary policy, creating cyclical liquidity ups and downs, and inflationary crises – like the current wave of over 8.5 percent inflation unseen in 40 years.

Steep and incessant hikes of America’s interest rates by the Fed inevitably has sparked an exodus of capital from the developing countries, which often leads to foreign debt defaults and implosion of many emerging market economies. Over the past decades, the world has witnessed many such economies – including Mexico, Argentina, Thailand, South Korea, Greece, Turkey and Sri Lanka – running into serious economic trouble because of the dollar-centric global financial system.

In recent years with the increased weaponization of the dollar and Washington’s penchant to use the dollar to sanction the so-called “unruly” countries in America’s eyes, many countries in the world have awakened and begun to experiment trading in their own national currencies and using other payment as well trade settlement systems other than the SWIFT code (Society for Worldwide Interbank Financial Telecommunication), which is largely at the disposal of the US government.

Since the 2008-09 global financial crisis which originated in the US, and quickly escalated into a global catastrophe, caused an economic tsunami pummeling all the countries and regions, more governments and central banks are exploring paths to break away from the dollar settlement and payment system, however, they have largely failed to make any headway to dent the dollar’s global dominating position.

But this time, Russia wants to do something different, as Moscow is determined to launch a counter-offensive against Western sanctions and the dollar-centric global financial system.

Angered by the unprecedented the Western financial and economic sanctions, Moscow asked all “unfriendly countries” that are imposing sanctions on it to pay for their fuel purchases in Russia’s rubles. The brave measure, Russian economists say, immediately helped stabilize the value of the ruble and significantly defuse the negative impact of the Western sanctions. In addition to crude oil and natural gas, some of the economists have suggested Moscow extend the requirement for importers of Russia’s grain, chemical fertilizers and other big-ticket products to transact in rubles, instead of dollars or euros.

Russia’s highly daring and innovative move to stabilize its own currency in time of difficulty has greatly incentivized other governments to follow suit. Now, there are media reports saying the BRICS countries are seeking to discuss deepening trade in their own currencies. For example, the R5 initiative has been proposed, targeting the use of the respective national currencies of BRICS – ruble (Russia), rupee (India), rand (South Africa), real (Brazil) and renminbi (China), to help settle trade among themselves.

Therefore, the unprecedented Western sanctions imposed on Russia, including restrictions on its central bank, now increasingly threaten to dilute the dominance of the US dollar and may result in a more fragmented international monetary system. To date, Moscow has almost entirely sold off its American bonds, and lately, there are growing signs that the world’s other major economies begin to dump US Treasuries and other dollar-denominated American assets.

Actually, Washington has only itself to blame. In the recent years, American politicians, jittery about the economic rise of China and other emerging market economies, have deliberately created economic decoupling, technological blockades and industrial chain disruptions, in order to thwart economic growth of its competitors. It is natural for other countries to take decisive counter measures, including dumping dollar assets and departing the US stock market.

And, given that the US has been aggressively using deficit financing to combat the economic ravages of COVID-19 pandemic, the sustainability of its debt might be called into question too.

Since the US is stubbornly tethered to impeding and hurting other economies, its competitors have no obligations to embrace the outdated Bretton Woods system and help the US maintain the dollar hegemony. The dollar’s decades-long dominance has placed America in a strong position to dictate the terms of global trade and finance for the last 70 years. It’s high time for a change.

The author is an editor with the Global Times. bizopinion@globaltimes.com.cn