Yesterday Ukraine launched some kind of offensive in the general Kherson region north of the Dnieper. 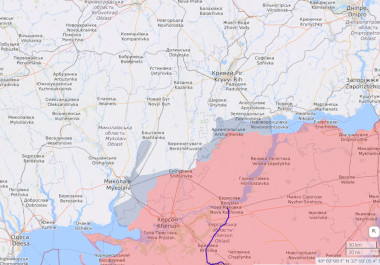 News of the success is murky. This morning Dima of the Military Summary Channel made a special report (vid) which listed the claims of both sides. His map drawings showed at least five directions of attacks. 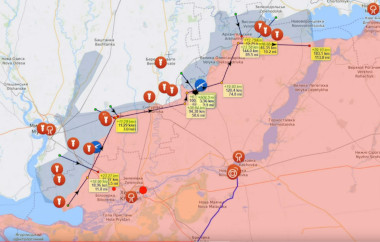 The Ukraine side claimed to have taken a handful of small villages near the former frontline. The Russian conceded the Ukraine had taken three or so but said that two of them were recovered over night.

Also this morning the Defense Ministry of Russia listed losses of the Ukrainian side. (Link goes to the Russian language report on the Rybar Telegram channel):

As a result of the defeat of the Ukrainian offensive carried out on the personal orders of Zelensky in the Nikolaev-Krivoy Rog and other directions, the enemy suffered large-scale losses.

It is a bit early to speak of defeat as the Ukrainian attacks continue. The total strength of the Ukrainian side is probably two divisions worth which means some 30.000+ soldiers.

The losses of 1,200 Ukrainian soldiers are therefore not yet significant. The fighting at the Donetsk front cost several hundred Ukrainian lives each day. But the relative high losses of tanks, IFVs and armored vehicles are very notable. That equipment was enough for at least three to five full battalions.

The losses can be explained by the flat open steppe in the area. There are very few wooded or build up areas that would allow tanks to hide. It is ideal for the defending side as long range anti-tank missiles can pick off the tanks before they even know where the fire is coming from.

The Ukraine does not have many armored vehicles left and has even difficulties to get more of them from the ‘west’. The countries which still had Soviet equipment have already given most of it to the Ukraine.

The Ukraine has also brought reserves from Odessa to Kryvyi Rih (Russian: Krivoy Rog) to protect it from an eventual Russian attack should the offensive fail.

That will most likely be the case. I expect everything to be back to its previous position in a day or two. We may then see a Russian attempt to break through the thinned out Ukrainian lines in this or that other direction.

In yesterday’s background briefing by the Pentagon the military doubt about this offensive was palpable:

I’m wondering if — [omitted], I know you can’t give us any apparent details on this counteroffensive. You said there’s been an uptick in fighting. Can you give us a sense how big of an uptick and is this fighting from both sides? Give us any sense of that you can.
…
SENIOR MILITARY OFFICIAL: Okay, Lita, thank you.

And then they have — as you all know, for the past couple of weeks, they have been making some small advances in and around the Kherson pocket for a while. So I don’t want to mislead you here and tell you that I don’t think the offensive is underway. I — I would just — I’d refer you to the Ukrainians right now because we have seen some offensive action in that area for the past couple weeks.

And I’ll pass it over to [omitted].
…
Q: Yeah, for the senior military official, so you say you really can’t give us any particulars on this offensive. You see an uptick in fighting. You say go to the Ukrainians. The Ukrainians are saying this is a significant counteroffensive. So clearly, you’re not willing to go that far, correct?

SENIOR MILITARY OFFICIAL: Tom, I’m just saying, I think the Ukrainians have a better way of telling you what they’re doing than we do. I mean, even in the best case, you know, I’m getting my reporting from the Ukrainians. So —

Q: Well, are they telling you that it’s a significant counteroffensive? Because that’s kind of what they’re saying publicly. Are you getting the same thing? And if — if that’s the case, why can’t you tell us it’s a — a counteroffensive?

SENIOR MILITARY OFFICIAL: Well, I just don’t — I mean, listen, are they on the offensive? I think they are. Is this a counteroffensive? I don’t know. And the reason I tell you that is because, as I said, over the past couple of weeks, we’ve seen them making some offensive moves in and around the Kherson pocket.

So listen, I’m — you know, like you, I would love to have perfect information here. I think we’ll get some more information over the course of the next 24 to 36 hours.

Q: Yeah, but again, it’s frustrating for us because they’re saying it’s a big counteroffensive and what we hear — see — hear from you guys is, like, an uptick in fighting. Those two don’t match, you see?

SENIOR MILITARY OFFICIAL: No, I’m with you, Tom.

To me this sounds like the military official is not at all convinced that this a serious offensive that makes sense.

That is likely because it does not make sense and is just another waste of lives.

It is Zelinski’s attempt to prove to the ‘west’ and the local public that Ukraine can be successful and should receive continued support.

Four days ago the New York Times said that Zelenski was “under pressure” to launch the counteroffensive:

As the bloody artillery battle in Ukraine’s east settles into a stalemate, the war appears now to be a waiting game for a long-promised Ukrainian counteroffensive.

The timing for any move to break the deadlock has emerged as a pivotal strategic decision for Ukraine’s government.
…
The initial target of any counterattack is widely assumed to be Russian positions on the western bank of the Dnipro River. Move too soon, though, and the Ukrainian army may prove unready and insufficiently armed to ensure victory, military analysts say. Wait too long, and political backing in Europe may waver as energy prices soar.

Political pressure is mounting for President Volodymyr Zelensky of Ukraine to make a move even as it remains unclear whether his military has amassed the necessary weaponry and manpower.

“The very difficult state of our economy, the constant risks of air and missile attacks and the general fatigue of the population from the difficulties of war will work against Ukraine” over time, Andriy Zagorodnyuk, a former minister of defense, wrote in the Ukrainska Pravda newspaper. He said the military should be prepared to advance, rather than defend.

“It makes no sense to drag out the war for years and compete to see who will run out of resources first,” he wrote.

On the same day another NYT piece also dug into the issue:

The timing for any such attack has emerged as a pivotal decision for Ukraine’s government. Both sides are preparing for a protracted war, but Ukraine has greater incentive to try to avoid it with potentially risky maneuvers as early as this fall — before the rainy season turns the countryside into impassable bogs, or energy shortages and soaring costs undermine European support.

“An offensive is risky,” said Michael Kofman, the director of Russian studies at C.N.A., a research institute in Arlington, Va., assessing Ukraine’s options.

“If it fails, the outcome could affect external support,’’ he said. “On the other hand, Kyiv likely sees this as a window of opportunity, beyond which lies the uncertainty of a protracted war against a Russian army that has had time to entrench.”
…
But several military analysts say there is a disconnect between Ukrainian civilian leaders, pressing for a major victory, and military leaders who want to ensure they have sufficient troops and combat power before conducting a major offensive.
…
“There’s a desire to show international partners that their support will enable Ukraine to win, not just hold on,” said Jack Watling, a senior research fellow at the Royal United Services Institute in London, who just returned from Ukraine. “And there is an expectation from the Ukrainian people they’ll be able to liberate their territory.”

But he cautioned, “a military offensive needs to be based on conditions on the battlefield,” not in the political arena.

In my view the offensive was launched at the wrong time and with too few troops along too many axes.

Two month ago the Ukrainians had already assembled a decent force in the Kherson area. It then started to loudly talk about the upcoming offensive. Instead it should have attacked immediately along one or two axes to make at least some gain.

After the loud talk the Russians reinforced their side in the area. At the same time they launched an offensive in the Donetsk region. The Ukrainians had to move some of the units prepared for the Kherson offensive to the Donetsk region to prevent a deeper Russian penetration into that frontline. Other units, waiting for the order to attack in the Kherson region, were mauled by Russian long range artillery strikes.

When its forces were assembled the Ukrainian military should have attacked immediately. The long wait made the situation more difficult.  To break the reinforced Russian lines now would have taken more troops than were available.

I am sure that the Ukrainian military knew that this offensive would fail.

For political reasons Zelenski ordered them to launch it anyway. There are now another 1,000+ Ukrainian and Russian lives lost for nothing other then some sensational headlines and political optics.

One thought on “Ukraine – A ‘Counteroffensive’ That Was Destined To Fail”