When the Ukraine launched its Kherson ‘counteroffensive’ on August 29 I was pretty aghast and judged that it was destined to fail:

To break the reinforced Russian lines now would have taken more troops than were available.

I am sure that the Ukrainian military knew that this offensive would fail.

For political reasons Zelenski ordered them to launch it anyway. There are now another 1,000+ Ukrainian and Russian lives lost for nothing other then some sensational headlines and political optics.

More than 3,000 Ukrainians have died by now in the Kherson offensive without having made any significant progress. Hundreds of tanks and armored vehicles were lost. A dozen Ukrainian planes and helicopters have been shot down. All the material had come from the ‘west’ which has now emptied its stock of Soviet weapons. No more will be coming anytime soon.

The Ukraine thereby blew its chance to hold a line against any significant new moves from the Russia side. Those moves will be coming.

But what really bothers me is the human toll of this offensive.

I have never been at war. But I have had a decent full time military officer training over several years plus several month long reserve stints in active duty battalions. I have read lots of books and watched dozens of movies about frontline fighting in World War I, II, Korea, Vietnam, Afghanistan etc. If one reflects on those events and the details described in the depictions one gets a ‘feel’ for such conflicts. Then there is the operational math like the numbers of artillery rounds fired per square kilometer, troop density and the toll such artillery bombardments will inevitably take.

The ‘west’ should have given up and make the concessions that Russia had demanded. It will have to make those anyway.

The Ukrainian government has tightly controlled the media and any reporting from the frontline. We have only had Russian reports of high numbers of Ukrainian casualties. Some doubt the numbers the Russians give. I don’t. They mostly fit with what I learned and with  calculations.

Now a Washington Post reporter got access to hospitals where wounded Ukrainian soldiers involved in that ‘counterattack’ try to recover. John Hudson’s report is grim even as it is not from the frontline and holds back on the most grievous scenes:

As the piece is behind a paywall I will extensively quote from it:

In dimly lit hospital rooms in southern Ukraine, soldiers with severed limbs, shrapnel wounds, mangled hands and shattered joints recounted the lopsided disadvantages their units faced in the early days of a new offensive to expel Russian forces from the strategic city of Kherson.

The soldiers said they lacked the artillery needed to dislodge Russia’s entrenched forces and described a yawning technology gap with their better-equipped adversaries. The interviews provided some of the first direct accounts of a push to retake captured territory that is so sensitive, Ukrainian military commanders have barred reporters from visiting the front lines.
…
“We lost five people for every one they did,” said Ihor, a 30-year-old platoon commander who injured his back when the tank he was riding in crashed into a ditch.
…
Russia’s Orlan drones exposed Ukrainian positions from more than a kilometer above their heads, they said, an altitude that meant they never heard the buzz of the aircraft tracking their movements.

Russian tanks emerged from newly built cement fortifications to blast infantry with large-caliber artillery, the wounded Ukrainian soldiers said. The vehicles would then shrink back beneath the concrete shelters, shielded from mortar and rocket fire.

Counter-battery radar systems automatically detected and located Ukrainians who were targeting the Russians with projectiles, unleashing a barrage of artillery fire in response.

Russian hacking tools hijacked the drones of Ukrainian operators, who saw their aircraft drift away helplessly behind enemy lines.
…
Oleksandr said the Russian artillery fire was relentless. “They were just hitting us all the time,” he said. “If we fire three mortars, they fire 20 in return.”

The Ukrainian soldiers said they had to carefully ration their use of munitions but even when they did fire, they had trouble hitting targets. “When you give the coordinates, it’s supposed to be accurate but it’s not,” he said, noting that his equipment dated back to 1989.
…
Russian electronic warfare also posed a constant threat. Soldiers described ending their shifts and turning on their phones to call or text family members — a decision that immediately drew Russian artillery fire.

“When we turn on mobile phones or radio, they can recognize our presence immediately,” said Denys. “And then the shooting starts.”
…
The Ukrainian claims of retaking villages such as Vysokopillya could not be confirmed, though soldiers interviewed said they were able to advance into some previously Russian-controlled villages. Those soldiers declined to name the villages, citing instructions from their superiors.

A group of Washington Post journalists who traveled within three miles of Vysokopillya, in northern Kherson, on Monday were prevented from entering the village by Ukrainian troops and could not ascertain its status. A local official said Ukrainian and Russian forces were still battling for control.

A clear picture of Ukraine’s losses could not be independently assessed.
…
Denys, sitting upright on his hospital bed, said almost every member of his 120-person unit was injured, though only two were killed.

A 25-year-old soldier being treated for shrapnel wounds said that, within his unit of 100 soldiers, seven were killed and 20 injured. Ihor, the platoon commander, said 16 of the 32 men under his command were injured and one was killed.

Ukraine’s injured soldiers have been spread out to different hospitals across southern Ukraine to free up the main medical facilities near the Kherson region for incoming patients.

The soldiers in the second ‘counteroffensive’ attempt southeast of Kharkiv will have a similar fate.

My best guess is that Ukrainian losses are not five but ten times those on the Russian side. An attack, through the open steppe, on an armored force that is technologically superior is a suicide mission.

Suicide is what European politicians have committed their economies and societies to. Who knew that one needs energy, as cheap as possible, to smelter steel, aluminum and glass? 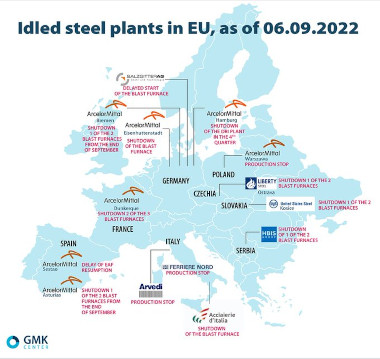 BREAKING: 40 CEOs of European metal producers have wrote an open letter to Ursula von der Leyen and the European Commission warning of an “existential threat” to industry as power prices surge.

This is ruinous for European states and their inhabitants. Meanwhile the U.S. politicians, neoconservative ideologist and money men behind the whole plan of using the Ukraine against Russia are laughing their asses off.

I am telling you people that the situation in #Europe is much worse than many understand.

We are also totally at the mercy of the authorities, and we have very little knowledge what they have planned.

Will they be able to stop the onset of the banking crisis, yet again? I don’t know, but I am doubtful. 🤷‍♂️🤔
…

Germany is probably in the worst situation. Chancellor Olaf Scholz reacted to the Russia military operation with hysterical moralizing that was beyond any rationality. His government depends on the Green politicians in his cabinet. These are pigheaded ideological nuts. Germany, under severe threat of blackouts, will now decommission three perfectly fine nuclear power plants and restart dirty old coal fired power plants that were supposed to be dismantled. How Green is that?

Here is the how the president of Russia is seeing it:

Europe is about to throw its achievements in building up its manufacturing capability, the quality of life of its people and socioeconomic stability into the sanctions furnace, depleting its potential, as directed by Washington for the sake of the infamous Euro-Atlantic unity. In fact, this amounts to sacrifices in the name of preserving the dominance of the United States in global affairs.
…
The competitive ability of European companies is in decline, for the EU officials themselves are essentially cutting them off from affordable commodities and energy, as well as trade markets. It will come as no surprise if eventually the niches currently occupied by European businesses, both on the continent and on the global market in general, will be taken over by their American patrons who know no boundaries or hesitation when it comes to pursuing their interests and achieving their goals.

The next federal elections in Germany are three years away. One really hopes for some kind of coup but I see little movement yet in such a direction.

Where are the rational politicians who can take over?