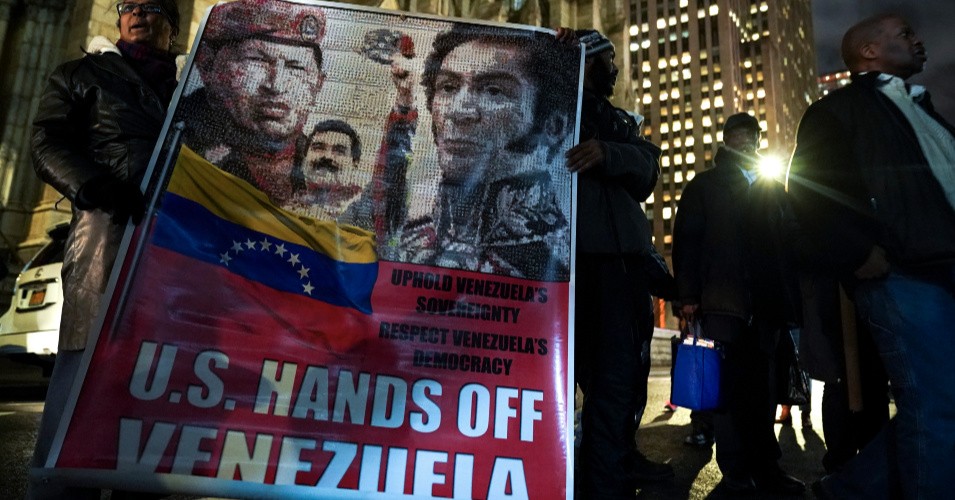 Imperialists have increased Nazi-style threats in their phase of intervention in Venezuela. But the Bolivarian leadership in the country is standing steadfast in the face of the increased threats.

“They want to enslave us!” Maduro slams Trump’s “Nazi-style” attack on socialism

Nicolas Maduro, the President of Venezuela, has slammed U.S. President Donald Trump’s belligerent rhetoric and his crusade against socialism after US president effectively ordered Venezuelan military to support the self-proclaimed “president” Guaido.

“Who is the commander of the armed forces, Donald Trump from Miami?” President Maduro questioned aloud after the US leader virtually issued an ultimatum to the Venezuelan armed forces, warning officers they won’t have any possible “way out” unless they accept Guaido’s “generous offer” to defect without retribution.

“They think they own the country!” Maduro said on state television, noting that Trump’s “arrogant orders” are an “offense to [the] dignity” of the Venezuelan military, who stand ready to defend the country’s sovereignty.

The Venezuelan leader also slammed Trump’s attack on socialism in his country and elsewhere, pointing out that the White House’s “Nazi-style discourse” seeks to limit political diversity and impose a colonial model of US supremacy across Latin America. “They want to enslave us,” Maduro said.

“Humanitarian aid is a pretext for a war of oil plunder,” Rodriguez said on Twitter, accusing Trump of trying to impose a puppet president in Venezuela. The offensive rhetoric only “confirms the threat of military aggression against Venezuela,” Rodriguez added.

Trump on Monday insisted that Venezuelans are suffering only because of Maduro’s corrupt socialist dictatorship.

But the democratically elected government of Venezuela blames the US sanctions for the economic suffering of the Venezuelan people.

U.S. President Donald Trump’s only thoughts are to stay in the White House and his humanitarian aid is just a show, Maduro said of Trump’s speech in Miami.

“What is it that Trump loves from Venezuela? Oil, coltan, diamonds […] the worst thing is that there are people from Venezuela who serve as puppets. The humanitarian aid is a show, they rob us US$30 billion dollars and they offer us US$20 million in rotten food,” Maduro said during the televised response just an hour after Trump concluded his speech in Florida.

“Today Donald Trump was in Miami with a tired rhetoric, questioning the right of our free country to adopt the ideas of human, Christian socialism, with an almost Nazi-styled speech to stunt different ideologies,” said Maduro.

Throughout his speech, Trump harshly criticized socialism, defining it as an ideology “based on ignorance.”

Trump told the crowd of expat Venezuelans and Venezuelan-Americans gathered at the Florida International University, “Socialism insists on absolute conformity, it’s not about justice, or equality, or lifting up the poor. It’s about power for the ruling class.”

Maduro responded, “Donald Trump wants to ban ideologies, political diversity and wants to impose the unique perspective of the white supremacists from the White House.”

The United States believes they own Venezuela and have the power to dictate the nation’s future, Maduro said, adding that he believes the U.S. wants to enslave citizens.

However, the Bolivarian Republic will survive and will continue to “pursue its diverse ideas” while respecting the diversity and beliefs of others, the Venezuelan president said.

Over the last year, the imperialists have repeatedly attempted to overthrow democratically elected Venezuelan President Maduro through various means. First with sanctions, then with threats of a militarized intervention, and more recently coercing its allies to back the self-proclaimed “president” Guaido, all with the purpose of confiscating Venezuela’s vast oil reserves, according to U.S. National Security Adviser John Bolton.

The U.S. Congress has rejected trump’s proposal of a militarized intervention into the Bolivarian nation. However, the U.S. President has continued his attempts to violate international law and send unsolicited “humanitarian aid” to the “poor Venezuelan boys and girls.”

Maduro noted that although the “humanitarian aid” from the U.S. has remained in Colombia, Venezuela has continued to receive assistance from the UN and recently received 300 tons of aid from Russia.

Earlier this week, another shipment of medical supplies of 933 tons arrived in Venezuela from Cuba, China, Russia, Palestine, Turkey, among others.

Russian Foreign Minister Sergey Lavrov denounced Washington for openly pushing for a military coup in Venezuela, saying the US “has lost all sense of shame” in its handling of the Venezuelan crisis.

In a heated speech, Trump has warned the Venezuelan military that they are risking their lives and future by supporting President Maduro. Now, “all options” are open to bring “democracy” in the Latin American country.

Directly addressing the Venezuelan soldiers who continue to back President Maduro, Trump gave them the choice of accepting self-proclaimed “interim president” Guaido’s “generous offer of amnesty,” or facing “no safe harbor, no easy exit, and no way out.”

“You will lose everything,” he cautioned. “I have a message for every official who is helping to keep Maduro in place. The eyes of the entire world are upon you today, every day and every day in the future.”

Trump proclaimed “the days of socialism and communism are numbered,” blaming “Maduro dictatorship” for all of Venezuela’s woes. “Peace loving nations are willing to help Venezuela reclaim its democracy, its dignity and its destiny,” he said.

Maduro has declared he will not bow to US pressure or resign, blaming Washington for deliberately exacerbating the crisis. He has declared the aid sitting at the Colombian border to be little more than “crumbs” and a publicity stunt, especially compared to billions of dollars the US had frozen in Venezuelan assets.

A six-member European MP-delegation that sought to meet Guaido was expelled from Venezuela after being accused by Caracas of coming with “conspiratorial purposes.”

The EMPs arrived in Venezuela on Sunday and were supposed to stay until Tuesday to carry out a series of meetings, including with Guaido.

These plans, however, went awry shortly after they landed, when the MPs received a cold welcome from the Venezuelan authorities, who are now deporting them back to Europe, according to delegation member Esteban González Pons.

Pons tweeted that upon arrival, their passports were seized, and deportation procedures were launched. The politician from Spain’s liberal conservative Peoples’ Party said he was part of the “first international delegation invited by president Guaido.”

“We are being kicked out today. Tomorrow we will come back to a free Venezuela,” he tweeted, calling their looming expulsion from the country “the final proof that options are over, and the EU shall withdraw from the Contact Group.”

Venezuelan Foreign Minister Arreaza said that the parliamentarians had been warned that they would not be let into the country “several days ago” through “official diplomatic channels.”

“The Constitutional Government of the Bolivarian Republic of Venezuela will not allow the European extreme right to disturb the peace and stability of the country with another of its gross interventionist actions,” Arreaza tweeted.

Pons said the parliamentarians were aware that they might be turned back at the border, and had been notified that they would be “either retained or expelled,” but chose to proceed with their journey anyway.

Manfred Weber, the head of largest political group at the European Parliament, blasted Venezuela’s treatment of the MEPs. “The Maduro regime is scared of what foreign observers will see,” he tweeted, calling on the EU to recognize Guaido as the leader of the country.

Washington is backing Guaido, handing him control over Venezuelan assets in the US and sending “aid”, which Caracas claims might mask covert preparations for an invasion – drawing on a recent example when the current US special envoy to Venezuela used supposed “aid” shipments to send weapons to Nicaraguan rebels.

Venezuela’s Vice President of Planning, Ricardo Menendez, said on Monday that direct losses to the country’s economy from U.S. financial sanctions are estimated at US$38 billion.

The figure corresponds only to the effects on the production of goods and services, as well as on the activity of hydrocarbons, the minister said in an interview with the Venezuelan News Agency.

Of this total, $23 billion respond to the impact on the GDP while 15 billion are related to the siege against the company Citgo, a subsidiary of the state oil company Venezuelan Petroleum in U.S. territory, seized at the end of January.

The greatest number of production losses coincided with the actions of street political violence, known as “guarimbas”, in 2017, which affected the main trade routes.

“If we add to this the $20 billion that were taken during the oil sabotage of 2002, we are talking about $58 billion in losses that have affected the nation,” he said.

In this regard, Menendez stressed that it is “cynical” for sectors of the opposition, protected by foreign governments, to promote the entry of supposed humanitarian aid when what they have done is to attack a sovereign country.

The right aims to suffocate the national economy, affecting input routes in parallel with the advance of its humanitarian aid discourse.

The Executive’s challenge is, precisely, to optimize the mechanisms to protect the people’s income with a real exchange value that evades inflation.
According to the Vice President of Planning, the objective is to build a new economic apparatus and price structure, with other distribution schemes that will prevent the oligarchy from stealing the people’s money.

The senator was part of a U.S. delegation visiting the Colombian border city of Cucuta, where “aid” is being stockpiled for planned delivery to Venezuela.

In a televised interview, Rubio declined to say explicitly if he would support U.S. military intervention against Venezuela.

Venezuelan President Maduro has repeatedly stated that Venezuela requires no aid from the U.S.

The U.S. delegation included Carlos Trujillo, the U.S. ambassador to the Organization of American States, and Republican U.S. Representative Mario Diaz-Balart of Florida.

Rubio, a former presidential candidate, does not have the authority to call for specific actions but sits on the U.S. Senate’s Foreign Relations Subcommittee on Western Hemisphere, Transnational Crime, Civilian Security, Democracy, Human Rights and Global Women’s Issues, which handles legislation related to Canada, Mexico and South and Central America.

Venezuela’s government will stage two concerts on the Colombian border this weekend to compete with a “Live Aid”-style show announced by British billionaire Richard Branson to raise funds for food and medicine “for” Venezuela, which are actually for imperialist intervention.

Branson said last week he was organizing a concert on February 22 in Cucuta, where donations provided by the U.S. are already being stockpiled.

Venezuelan Information Minister Jorge Rodriguez said on Monday that the government was also planning concerts on Feb. 22 and 23, on the Simon Bolivar Bridge connecting the country with Cucuta, with the slogan “nothing for war, hands off Venezuela”.

The government would also hand out food to poor residents of Cucuta this weekend, he said in televised statements.