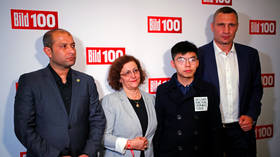 Hong Kong protest figurehead Joshua Wong, who has been rocking up to ‘pro-democracy’ meetings with various Western officials in recent weeks, has been spotted hanging out with the chairman of the White Helmets in Berlin.

Wong attended the ‘Bild 100’ summer party in Berlin this week, where he seems to have bumped into White Helmets boss Raed Al Saleh. That’s a tad awkward, since the Syrian first-responders group has been heavily linked to Al Qaeda and US-sponsored jihadist militias – a fact that did not go unnoticed on Twitter.

To prove that he’s not a pawn of the US intelligence … Joshua Wong met with Al Qaeda’s medic team, the White Helmets. &#55357;&#56832; My God, what a stupid world we live in#HongKongProtests#StandWithHongKonghttps://t.co/M9DkVgdctc

The White Helmets is a dead giveaway that this is a Propaganda Construct.

There was another familiar face in the snaps, too: Mayor of Kiev Vitaly Klitschko, who was, for a time, himself a Western favorite when Ukraine was in Washington’s regime-change crosshairs.

But Wong has had some questionable high-level meetings, too. He also met German Foreign Minister Heiko Maas at the event – with that tete-a-tete quickly slammed by Beijing.

These meetings come on the heels of photos showing Wong speaking to Julie Eadeh, an official from the US consulate general in Hong Kong, which raised more suspicions that Washington had a hand in the recent violent anti-China protests.

Skip back a little further in time and there are also pictures of Wong with Venezuela coup plotter, Republican Sen. Marco Rubio.

Left: At the Congressional Commission on China, a U.S. body which ‘monitors human rights & rule of law in China’

But Wong doesn’t discriminate. It seems he’ll meet with any American willing to meet him. He was also pictured with Democratic Party leader Nancy Pelosi back in 2015, at the ripe old age of 18.

If he wants to avoid the appearance of being used as a US regime-change asset, Wong certainly seems to be going about things the wrong way.