Dr. Carl Juaneau, who is specialized in epidemiology, has pointed me to a page where he collects useful information about the novel Coronavirus Sars-CoV-2 and the current pandemic it causes.

It is quite good. Make sure that you scroll beyond the long country statistic for additional useful information.

Eight days after we wrote Why We Must Shut Everything Down And Do It Now it finally gets done. European countries have closed their borders and told their people to hunker down. Major car companies like Volkswagen, Peugeot and Fiat have stopped their production as car sales have slumped anyway. Airbus shut down two of its production sites to revamp them for better protection of its workers. In the U.S. the Bay Area, New York, Seattle and other major cities have also basically closed down.

Even Britain’s Prime Minister Boris Johnson has changed his mind. Instead of taking it “on the chin” as he had suggested and letting many people die until the rest achieves ‘herd immunity’ Britain will now finally try to stop the spreading epidemic.

Racism is the reason that this is happening so late. China, South Korea and Singapore had already shown what needs to be done fo fight the epidemic and how to do it successfully. But Asian voices do not count in ‘white’ decision making. The political action in Europe and the U.S. only started to happen after Italy was hit very hard.

And our governments are still not doing enough.

We must test every person’s temperature at airports and trains and build up drive thru testing capacity. If one does not search for the virus one will not find it. We must test, test, test to track all virus carriers down and to stop the spreading.

There must be a mandatory isolation of people who are probably infected but do not show symptoms as well as separate isolation of suspected and detected cases with ‘mild’ symptoms.

Telling a probably infected person to shelter with their family, as is now done in the U.S. and the U.K, will only kill more people. 75%-80% of the cases in China got infected through direct family contact. The family chain must be broken to effectively stop the epidemic.

Probably infected persons, i.e. those who had contact with another infected person, should be put under quarantine in sport arenas or exposition facilities to be supervised by medics.

Contact tracing teams must ask each of them with whom they met over the last days and then check on those persons. This requires lots of people and resources but China has show that it is doable. Tracing cellphones may be useful to help with this. Community monitoring may be a viable alternative.

Additional hospital capacity must be built. There must be hospitals exclusively for Covis-19 cases and others for people with different medical problems.

NYT science and health reporter Donald McNeil, who was in China during the shutdown, explains very well how China has beaten the epidemic in Wuhan. Please watch this:

Organizing all those measures is exactly what our governments should have done since the end of January. Today they are still only discussing most of those measures.

Boris Johnson is said to have changed his strategy based on a new study from the Imperial College. The study says:

Two fundamental strategies are possible: (a) mitigation, which focuses on slowing but not necessarily stopping epidemic spread – reducing peak healthcare demand while protecting those most at risk of severe disease from infection, and (b) suppression, which aims to reverse epidemic growth, reducing case numbers to low levels and maintaining that situation indefinitely.

Mitigation was the way Boris Johnson had planned to go because he wanted to achieve ‘herd immunity’ for all of Britain. That is something that can only be done through vaccinations. The idea was clearly lunatic. The study says that such a ‘mitigation’ would have resulted in “hundreds of thousands of deaths and health systems (most notably intensive care units) being overwhelmed many times over.”

There was by the way nothing new in Johnson’s ‘new’ Imperial College study. Here is Richard Horten, the editor of the famous medical journal Lancet, telling it like it is (emphasis added):

It said it took a study from Imperial to understand the likely burden of COVID-19 on the NHS. But read the first paper we published on COVID-19 on Jan 24. 32% admitted to ITU with 15% mortality. We have wasted 7 weeks. This crisis was entirely preventable.

The morning after the dramatic change in strategy to COVID-19 by this govt, I can’t help but feel angry that it has taken almost two months for politicians and even “experts” to understand the scale of the danger from SARS-CoV-2. Those dangers were clear from the very beginning.

Chinese clinicians and scientists—Chen Wang, George Gao, Chen Zhu, Bin Cao—did the world a great service by immediately sharing their data, warning the world that SARS-CoV-2 was a dangerous new virus. I’m appalled to say that western “experts” failed to heed their warnings.

Laura Kuenssberg says (BBC) that, “The science has changed.” This is not true. The science has been the same since January. What has changed is that govt advisors have at last understood what really took place in China and what is now taking place in Italy. It was there to see. 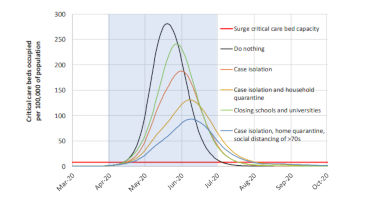 “You may live” and “you must die” decisions will have to be made as there is not enough capacity in place.

Shutting down most public life is now clearly the best thing to do. In Italy, the town of Lodi (green) had the first case, and locked down on Feb 23. Bergamo (red) waited until March 8. See the difference:

Today ANSA reported that there are now no more free intensive care beds in Bergamo, a city with more than 120,000 inhabitants.

The delay between the shutdown in Wuhan and a fall in new daily cases was 12 days. 10 to 14 days from now we will probably see a drop in the number of new cases in European societies and within the shutdown areas in the U.S. But that is not guaranteed unless the additional measures come into play.

The late shutdown decisions by ‘western’ governments come at a very high price. Many more people will die because the time and information China gave us to prepare was not used to make the necessary decisions. The late decisions will also increase the time it will take to fight the epidemic down. They thereby also increased the economic damage all this will cause.

People should ask their governments why they disregarded the information and experience from Asia.

2 thoughts on “Coronavirus – A Lockdown Is Not Enough”