Who Was Behind It? Anthony Fauci’s Intent To Block HCQ on Behalf of Big Pharma 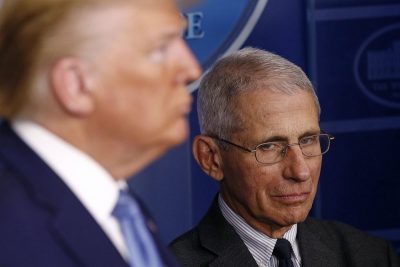 The Guardian has revealed the scandal behind the hydroxychloroquine study which was intent on blocking HCQ as a cure for COVID-19. “Dozens of scientific papers co-authored by the chief executive of the US tech company behind the Lancet hydroxychloroquine study scandal are now being audited, including one that a scientific integrity expert claims contains images that appear to have been digitally manipulated. The audit follows a Guardian investigation that found the company, Surgisphere, used suspect data in major scientific studies that were published and then retracted by world-leading medical journals, including the Lancet and the New England Journal of Medicine.

According to The Lancet:

… several concerns were raised with respect to the veracity of the data and analyses conducted by Surgisphere Corporation and its founder and our co-author, Sapan Desai, in our publication. We launched an independent third-party peer review of Surgisphere …  As such, our reviewers were not able to conduct an independent and private peer review and therefore notified us of their withdrawal from the peer-review process

The study was apparently based on a data analysis of 96,032 patients hospitalized with COVID-19 between Dec 20, 2019, and April 14, 2020 from 671 hospitals Worldwide. The database, according to the Guardian was false.

“I am truly Sorry”

Surgishpere CEO Dr. Sapan Desai was not in charge of the study. The lead author was Harvard Medical School professor Mandeep Mehra:

“I did not do enough to ensure that the data source was appropriate for this use. For that, and for all the disruptions – both directly and indirectly – I am truly sorry.”

CEO Dr. Sapan Desai took the blame. Who was behind him?

The Surgisphere Scientific Scam. Who was behind it?  Who “commissioned” this Report?

Was the pharmaceutical industry and vaccine lobby group behind this initiative?  The Lancet acknowledges that the study received funding from the William Harvey Distinguished Chair in Advanced Cardiovascular Medicine at Brigham and Women’s Hospital which is held by Dr. Mandeep Mehra. In this regard, it is worth noting that Brigham Health has a major contract with Big Pharma’s Gilead Sciences Inc, related to the development of the Remdesivir drug for the treatment of COVID-19. The Gilead-Brigham Health project was initiated in March 2020.

Was the Surgisphere study intended to provide a justification to block the use of HCQ, as recommended by Dr. Anthony Fauci, advisor to president Trump? Upon reading the study (prior to its retraction),  “Dr Fauci, … grinned as he told CNN that “the data shows hydroxychloroquine is not an effective treatment …”Referring to the Surgisphere report: “The scientific data is really quite evident now about the lack of efficacy for it [HCQ],” said Dr. Fauci. (quoted by CNN).

Here is the CNN’s authoritative assessment of Surgisphere’s  report (prior to The Lancet’s Retraction):

“Seriously ill Covid-19 patients who were treated with hydroxychloroquine or chloroquine were more likely to die or develop dangerous irregular heart rhythms, according to a large observational study [by Surgisphere] published Friday [May 22, 2020] in the medical journal The Lancet.

And Did CNN “retract” its earlier endorsement of  fake scientific study?

Dr. Anthony Fauci who is the Director of the National Institute of Allergy and Infectious Diseases (NIAID), has from the very outset led the campaign against hydroxychloroquine (largely on behalf of Big Pharma) invoking similar “scientific arguments” against HCQ, saying categorically there was no cure to COVID-19, and the only solution was the vaccine.

According to the Spectator:

The campaign to destroy hydroxychloroquine has been waged relentlessly, both by competitor pharmaceutical companies and those who want to destroy the US economy to advance their political agenda. It is shocking that it has cost hundreds of thousands of lives and billions of taxpayer dollars. But although the corruption of science for political and/ or financial gain has become a defining characteristic of our age, it is not a new story.

The publication of the Surgisphere study had an immediate impact: According to the Guardian, “Surgisphere data led to global trials of hydroxychloroquine for Covid-19 being halted in May, because it appeared to show the drug increased deaths in Covid-19 patients”.

“Higher Risks of Death” if you take HCQ, according to the study. In the days following the fake Surgisphere Lancet report on May 22, several countries including Belgium, France, Italy, acted to halt the use of hydroxychloroquine. The study had concluded patients taking the anti-malaria drug had a higher risk of death than those who were not taking the medication 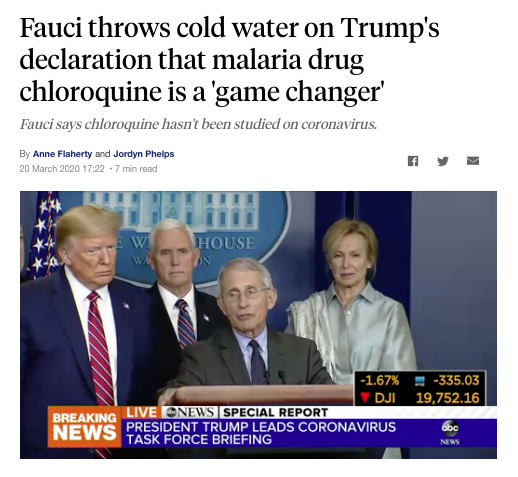 It is worth noting that prior to the conduct of the Surgisphere study, Dr. Fauci stated categorically that the use of HCQ had not been studied in relation to the coronavirus. “No proven drug”: “Not Enough Known”. Nonsensical and false statements.

The main author Dr. Martin J. Vincent together with several of his colleagues were affiliated with the Special Pathogens Branch of the Atlanta based CDC together with co-authors from a Montreal based partner research institution.  The main conclusions of this study are that Chloroquine is a tested drug and can be used for SARS-corona virus infections.

Dr. Anthony Fauci has not put forth a treatment which could be applied against COVID-19. What he is saying is that there is no treatment. And then he endorses the fake scientific study by Surgisphere which was subsequently retracted by The Lancet.

Lancet: the article was retracted

Dr. Anthony Fauci has been deliberately blocking a drug which was endorsed by the CDC 15 years ago for treatment of SARS-1 Coronavirus. More recently, it has been used extensively in a number of countries in relation to the Coronavirus or SARS-COV-2 (COVID-19) outbreak. Whose interests is he serving?

Featured image is from Vimeo via The Guardian

2 thoughts on “The Corruption of Science. The Hydroxychloroquine Lancet Study Scandal”