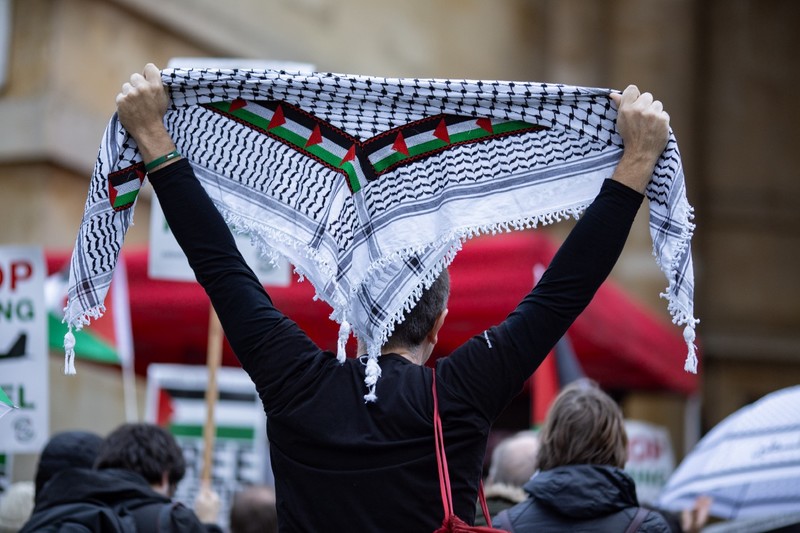 British Palestinians condemn the “shrinking space” in Labour for their rights. PSC

A group of leading British Palestinians have condemned what they say is a shrinking space in Labour to criticize Zionism and oppose Israeli policies.

In an open letter to the party on Friday, the group rejected Labour’s recent attempts to conflate anti-Zionism with anti-Jewish hate, insisting on “the right of Palestinians to accurately describe our experiences of dispossession and oppression.”

Demanding the right “to openly criticize the ideology of Zionism,” the signatories insist this is their right as an oppressed people and “a right of freedom of expression” which should be upheld by Labour.

Writing about Zionism, the signatories insist they “cannot but reject this ideology and to deny us the right to do so is a form of anti-Palestinian racism,” explaining that “Zionism is a political ideology and movement that has led to our dispossession and that sustains a state that discriminates against us.”

The letter reiterates Palestinian rejection of the IHRA “working definition” of anti-Semitism – a bogus defintion which has for years been pushed by Israel and its lobby.

The signatories say they were “alarmed” by the promise earlier this year by Labour’s shadow communities minister Steve Reed to tell all Labour’s council leaders to adopt the definition “in full and with all its examples including reminding them not to support actions that seek to delegitimize the state of Israel.”

This ignores “the evidence of how councils have previously used the IHRA to limit the rights of Palestinians, and of others advocating on their behalf,” the signatories insist.

Last year, a Labour council in East London banned a charity bike ride to raise money for Palestinian children, basing its decision on the IHRA definition.

The signatories warn of “threats posed by the IHRA examples to core Palestinian rights and to freedom of expression from Palestinian civil society,” and cite a 2018 declaration opposing the defintion by more than 80 Black, Asian and minority ethic organizations “including Black Lives Matter UK, prominent members of the Jewish community, leading lawyers and academic experts on anti-Semitism and the Institute for Race Relations.”

The Labour Party, they write, has a special responsibility to stop ongoing injustices against the Palestinians, “because of the role Britain played as a colonial power leading up to the 1948 Nakba, when Palestinians were forcibly displaced from their homes.”

Since left-wing Labour leader Jeremy Corbyn stepped down in April, his right-wing successor Keir Starmer has increasingly shifted the party towards Israel, in defiance of the party grassroots – which is now demoralized and divided.

Palestine solidarity activists and academics have been purged from the party and in June, Rebecca Long-Bailey was sacked as a shadow minister for tweeting an article which (apparently unbeknownst to her) contained a passing criticism of Israel.